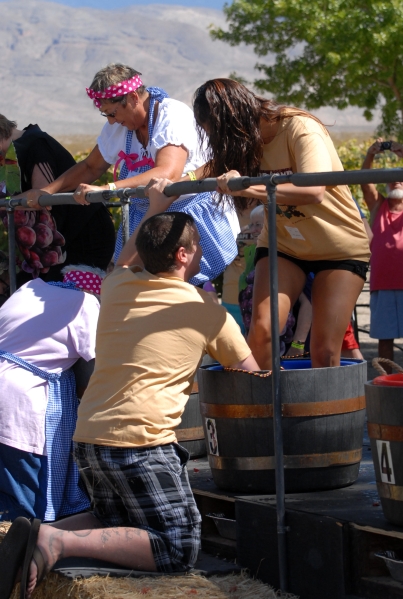 Going on Saturday and Sunday, from 11 a.m. until 5 p.m. each day at the winery, located at 3810 Winery Rd, the fun doesn’t just appear overnight, as it takes some time to put the event together.

Bill Loken, owner of Pahrump Valley Winery, explained it takes several days to prepare for their biggest event of the year.

“We work on it for a couple of weeks, mainly setting up all the tents and everything outside and get all stocked up, because we go through an awful lot of food and an awful lot of wine that weekend,” Loken said.

Loken said that during the two-week setup leading up to the fun, a crew of five workers set the whole place up.

Showing the popularity of the event, all spots in the two days of the grape stomp competition have already been registered for.

“Saturday and Sunday for stompers is all filled up, but general admission is still available,” Loken said. “There will be 170 teams of stompers for the two days. There is something like 85 teams per day.”

Those numbers are not a change from recent years that the winery sees participate in the stomping event, that is the maximum amount of stompers the winery can handle in the two days until they expand the event.

The attendance is a major jump from when the event first started however, as they were lucky to get a small fraction of what the turnout is now.

“Ten years ago we were lucky to get 20 stompers,” Loken said. “It’s grown big time.”

Both days the stomping takes place at four different times, noon, 1 p.m., 2 p.m. and 3 p.m. All competitors must sign in 30 minutes prior to their start time.

Each team is made of up of two contestants and has exactly two minutes to smash the most juice possible. Any team stomping after time is up will be disqualified.

One person will be in the barrel stomping while their teammate will be outside the barrel collecting the juice as it’s produced. The stomper and the partner may change positions as needed.

The winners will be determined by the volume of juice they produce and awards will be given to first, second and third place finishers.

those who don’t perform so well can still walk away winners as an award for worst stomper is up for grabs as well.

In addition to the grape stomp event, there will be several vendors, live entertainment that begins at 11:30 a.m. both days, and the ever-popular wine sale.

“Our wine sale, that’s a big draw,” Loken said. “We have a massive wine sale over the two days, as most of our wine will be 40 percent off for a case.”

Loken said the winery sells about 20 different wines and customers are welcome to mix and match all they want.

Loken mentioned that the Nevada wines are gaining in popularity and are starting to become one of the winery’s biggest sellers, despite them being relatively new.

“Many of them we have only had for a couple of years,” he said. “The vineyards just really started developing around 2011 and 2012, to start producing enough grapes for us to make nearly a couple of thousand cases a year of Nevada wine now. They’re getting much more popular from year to year as we continue to improve those wines.”

All who want to enjoy the stomping madness can with the general admission tickets selling for $10 per person at the gate. Admission includes the live music, complimentary wine tasting and access to all of the tasty treats to go with all that vino.

Although the spirit of competition is always a big draw for those who compete, for those who are more comfortable in the spectator role, the excuse for them is to let loose and have an enjoyable time.

“It’s basically an excuse for people to come out and eat too much, drink too much and make a fool of themselves,” Loken said.