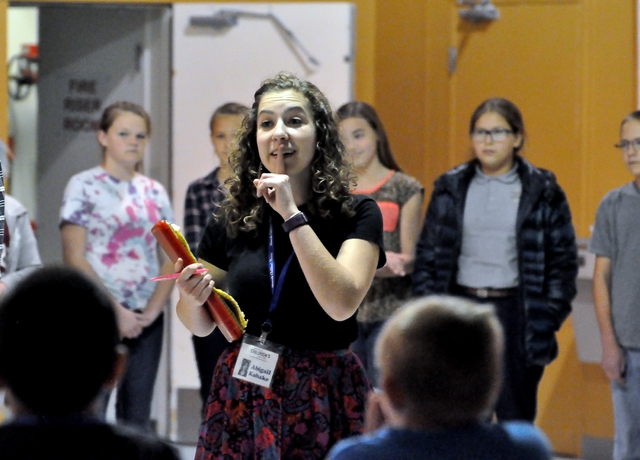 Director Abby Kohake talks to children during the auditions for the Missoula Children's Theatre's production of "Alice in Wonderland" at NyE Communities Coalition activity center on Monday. The show will be presented on Saturday, Dec. 3. Horace Langford Jr. / Pahrump Valley Times 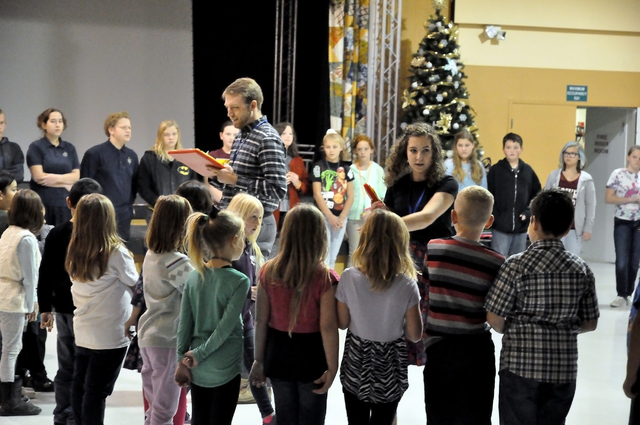 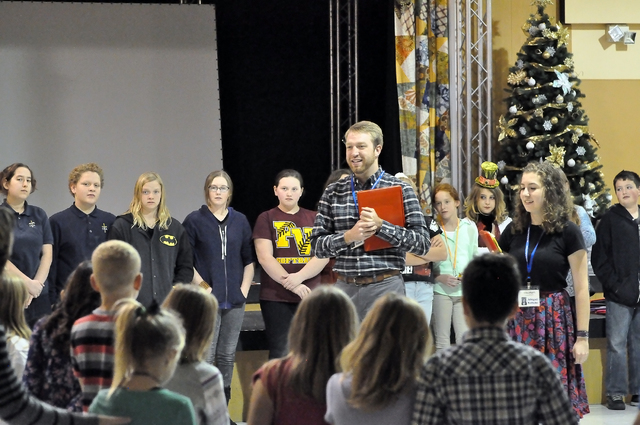 On the floor at the NyE Communities Coalition Activities Center, about 75 children sat in a large circle, patiently repeating lines after the two directors in the middle.

The auditions for the Missoula Children’s Theatre’s production of “Alice in Wonderland” kicked off Monday, giving Pahrump children a chance to participate in the performing arts.

Loretta Lindell, president of the Pahrump Arts Council that presented the Missoula Children’s Theatre residency, said this year’s auditions brought one of the largest groups.

“The auditions are always fun to watch,” Lindell said. “The kids are competitive but also support each other. This was one of the largest groups ever to audition.”

Director Abby Kohake said the Missoula Children’s Theatre gives children in different communities across the country an opportunity to get involved and experience theater.

“(There are) a lot of talented kids, I think it’s the hardest part of our job since we can’t always cast everybody, we have to pick and choose. It’s very hard,” she said.

Throughout the auditions, Kohake and another director, Jay Echols, look for loud and clear voices, expressive faces and the ability to listen and follow directions.

Kohake said they cast between 58 and 62 children in different roles. The first rehearsal with dancing and singing took place on Monday, with Echols working with the cards and the Queen of Hearts, the King of Hearts, the Knave of Hearts; and Kohake working with Cheshire cats, three Alices, the dutchess, the cook, the fish and the frog.

Renise Larsen, who came to the auditions with her 7-year-old daughter Ralyn, said it’s important to bring children to auditions so they can mingle with others.

“They get to meet new people, they get to build their character,” she said about the event.

“I’ve been entertained. Watching all the kids be silly and be themselves is cute,” she added.

Linda Connors came to the auditions with her two daughters, Lyn Gillies and Joselin Haugen-Brown.

“It gives them opportunity because it shows them that they can go out of their box, do something different, they don’t have to be shy all the time, they can make new friends and bond with other people,” she said.

Kohake and Echols will rehearse the children cast in roles during the week after school. On Wednesday, they will start runs of the show that will be followed by another rehearsal and the actual show on Saturday.

“It’s a progression. Not everyone is called for every rehearsal, but we gradually teach the show,” Kohake said.

Kohake and Echols have been touring across the country since the end of May with one mission, to put on “Alice in Wonderland.” They meet the same excitement anywhere they go, she said.

“We see such a wide variety of talent. The numbers may differ, every community is different, that’s what we love about each week. The kids bring something different to the role, so it’s never the same show twice,” she added.

Kohake called seeing the growth of kids that participate the most rewarding part of her job.

“We might see someone that was shy and then, they are speaking loudly at the end of the week or just watching kids’ potential and how they grow is really rewarding,” she said.

“Alice in Wonderland” will be presented on Saturday, Dec. 3 from 3 p.m. to 5 p.m., at the NyE Communities Coalition Activities Center.