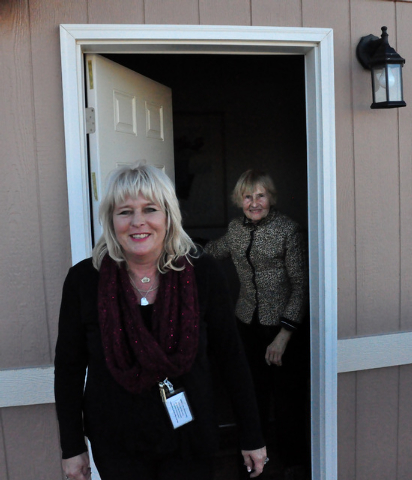 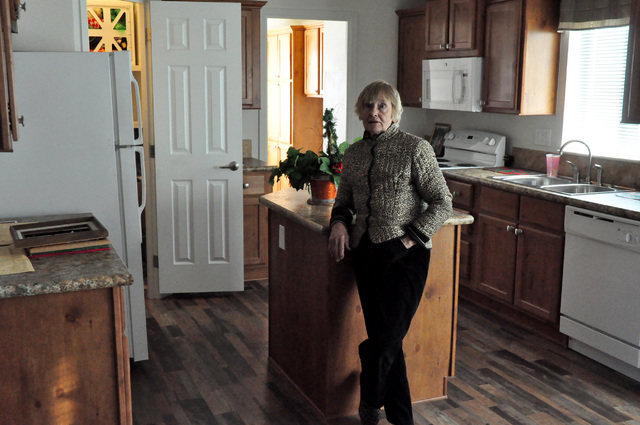 Living with Alzheimer’s is a reality for many people everywhere, even here in Pahrump.

To care for someone with Alzheimer’s is a major undertaking and poses many challenges.

Wombaker has lived with the disease for more than a decade and in that time she has made 95 You Tube videos on the topic. Wombaker said there are seven stages of Alzheimer’s. Her own mother is now in stage seven.

Wombaker made a You Tube video on these stages with her mother as the example of each stage. The video has over 90,000 views.

Joanne and Chris Baumgarten have chosen to live with Alzheimer’s. Joanne’s mom, Joan Rockouski, was diagnosed with the disease in mid-2010. Joan is now in stage five.

Joanne and her husband talk about the many challenges they have faced to keep their loved one at home.

“I moved her out here from Colorado because my brother was going to put her into a home because he couldn’t handle taking care of her,” Joanne said. “I took her out here for a checkup and they said she had dementia with mild Alzheimer’s components. This means she was very forgetful, she had problems remembering dates, times and hours. If you put an object in front of her she would forget where she put it. She would take it from you and won’t remember what she did with it.”

Joanne’s mom moved from Colorado and the family built a three bedroom house for her right next to Joanne and Chris’ house. They built the home in the back yard so the yard is completely enclosed.

For the family, to move mom in with them was not a big decision. Joanne had watched her mother and father go through this with her grandmother so she was familiar with the disease. She watched her loving parents care for grandma all the way until they had to put her in a home.

Chris also didn’t have a problem with his mother-in-law coming to live with them.

“I guess we have been through all kind of things together and this is just another bump in the road in life,” he said. “You can’t let it affect your relationship. We both have the same attitude on it and we do the best we can and take things one day at a time. When it comes to Alzheimer’s that’s the way you have to do things.”

He was the opposite of Joanne. He really had no major experiences with the disease.

“I did have an aunt who had Alzheimer’s. I remember she scared me,” Chris said.

And yet Chris still went into the situation with a positive attitude.

Joanne absolutely didn’t want to see her mom in a home.

“Chris and I talked about it and decided to do this because we didn’t want to see her in a nursing home,” Joanne said. “So it was a better decision to let her live with us. It really was not a big decision for us because between Chris and I it was the best thing to do.”

If you were to meet Joan, you would never know she had the disease. A year ago, Joan sliced her hand on a can and needed stitches. Joan called an ambulance. Joanne was not at home and was working. The doctors at the hospital didn’t know she had Alzheimer’s and were about to release her. Fortunately for Joanne, a friend had seen Joan at the hospital and let Joanne know she was there and she was able to get to her mom just in time.

“Just the thought of my mother being lost in this town was frightening. We were lucky,” Joanne said.

Since she was diagnosed, her mother was placed on two medications.

“Both the medications they gave her, the doctors said it would slow down the progress of the Alzheimer’s and it didn’t. It really hasn’t done what they said it would do,” Joanne said.

Joanne said her mother slowly got worse in the past two years. She developed paranoia. She thought people were taking things from her and getting into her house, despite being in an enclosed yard.

Although she has gradually gotten worse, at the moment she is on an even keel.

When she first arrived in Pahrump, Joanne’s mother was able to function and socialize with the family. She could make conversation. She did some daily things like clean and pick up things. Now that has changed, but Joanne, who does most of the care-giving said it is not to the point where she needs constant care and a nurse.

Joanne still has her day job, working with the Nye County School District as a secretary. She says she won’t give that up. If her mom gets worse, she will hire a nurse.

The family has made some big sacrifices since grandmother has come to live with them.

When Joanne is not working she makes sure her mother gets cleaned and takes her to the doctors. A typical day with her is like this: Joan is up at 5:30 a.m. and at Joanne’s house. She socializes with family and eats breakfast. She then goes out and tinkers in the yard. She sweeps the driveway and makes sure everything is clean there. Then she goes and hides in her house.

“If I have to go to the doctors then it’s a fight to get her to bathe. We have to force her to wash her hair and take a shower,” Joanne said. “It’s like taking care of another kid and it’s hard to see her like this.”

At 6 p.m. she will go and hide in her house until Joanne goes to her house and gives her a pill at night and then she is pretty much up all night.

“When she was at my house she would walk around the house all night so we had to keep her contained in the room,” she said. “It’s called Sundowners Syndrome. That is when a person with Alzheimer’s will stay up all night and just tinker.”

Chris to this day maintains a good attitude about his situation.

“We don’t know what tomorrow is going to look like,” he said. “The terrible thing about this disease is you don’t make plans. If you make plans around people who have Alzheimer’s, they will be broken pretty quick.”

He said his biggest challenge is just having patience.