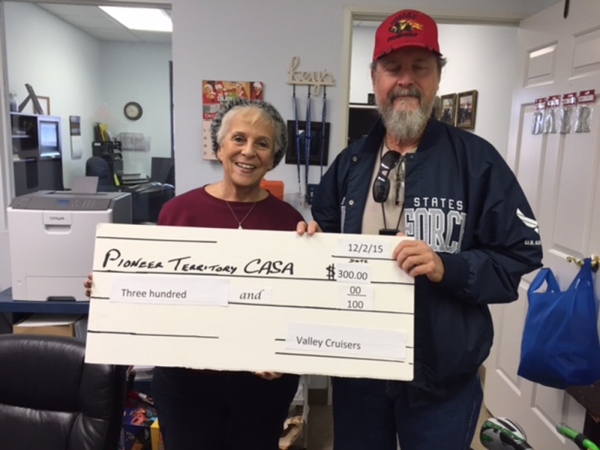 Making the holiday season a special one for local foster children is the goal for the Valley Cruisers of Pahrump.

The agency recruits, trains and supports advocates for abused and neglected children so they can thrive in safe, permanent homes.

“They will be coming to the party, which is not open to the public due to the confidentiality of the children,” she said. “We partner with the Division of Child and Family Services (DCFS) to put on the party for them. We’ll have games for them to play and cookie decorating. There’s also craft making and a visit from Santa and Mrs. Claus who will be doling out all of the gifts.”

Baer said officials held a ‘wrapping party’ this week for all of the unwrapped, donated gifts the agency received.

“The donated gifts must be unwrapped for safety purposes,” she said. “The caseworkers did a lot of the wrapping for us and they will also be manning the tables where the games will be played by the kids at the party.”

Additionally, Baer said she plans to continue the partnership with DCFS after a few problems sprang up in previous years.

“In the past, it was always done by somebody else and last year we had some difficulties trying to get everything organized,” she said. “It worked out very smoothly and so much better, so we decided to do it again this year with the help of all of the CASA advocates and caseworkers. We think the kids will have a great time.”