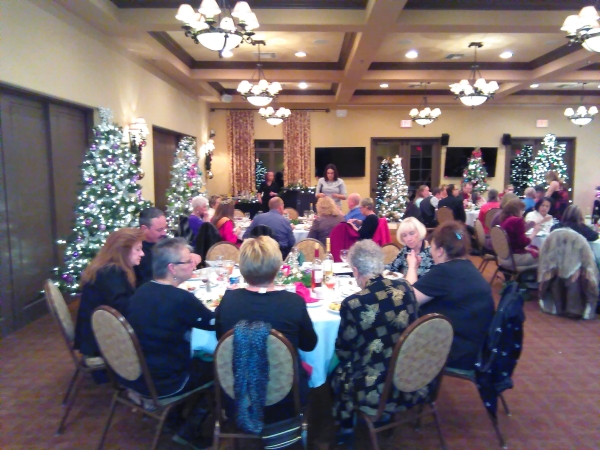 More than $5,000 was raised during the popular auction portion of the gala evening at the Mountain Falls Grill Room.

The event allows for attendees to bid on the decorated assortment of Christmas trees, wreaths and for the first time this year, stockings, stuffed with ‘comfort items.’

“We raised a total of $11,000 between the trees, the wreaths and the Christmas stockings this year which is new; we raised over $5,300 and that stays here in our community. You could sure tell people really love the wreaths because we had one of them that sold for over $700 and the other one was over $600.”

Censke noted a moderate crowd does not necessarily mean fewer dollars raised, as upward of 100 guests were in attendance.

“It’s not the size of the crowd that counts, it’s the size of the generosity of the people who are at the function,” he said. “I’m glad we were able to break a couple of records and I thought it was a phenomenal event. The whole evening was a win-win all the way around.”

The Christmas trees, wreaths and stockings were decorated by several local businesses and agencies.

Though she was pleased with the overall event, Holecheck said the hospice is considering a slight change to the fundraiser next year.

Censki, meanwhile said he’s always honored to be part of a community event that provides such a valuable service.

“To me, bar none, it’s the most important fundraising event of the year,” he said. “The service that Nathan Adelson provides is just phenomenal. A lot of people don’t think they will ever need something like that but when the time comes, they are there for you. As usual, the event was very festive and I really enjoyed it.”