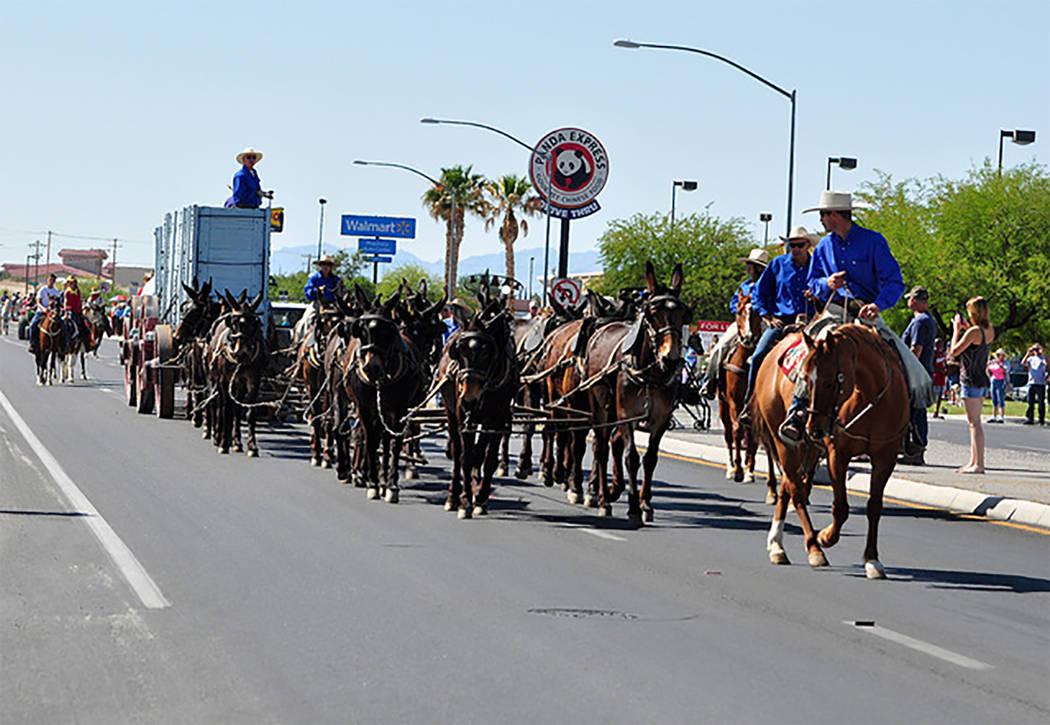 Selwyn Harris/Pahrump Valley Times The Wild West Extravaganza Parade is scheduled for at 9 a.m. Saturday near the Pahrump Nugget. Organizers said motorists should avoid the highway as it will be shut down from Highway 372 to Basin Avenue. Horses and wagons will be in the parade, along with numerous other sights and sounds.

A Pahrump western-themed tradition returns to town beginning today and running through Sunday.

The tradition was started by the late Bob Baker more than a decade ago with musical performances, vendors, games and more.

On Saturday, the popular parade is scheduled to proceed up to Petrack Park from Highway 372 at Highway 160.

“Highway 160 will be closed from Highway 372 at Crawford Street to Boot Hill Road from 8:45 .a.m until 11:30 a.m., for the Wild West Extravaganza Parade. There will be horses and wagons in the parade, along with numerous other sights and sounds.”

Just adjacent to the park is the Bob Ruud Community Center, where several performances are scheduled, courtesy of the Shadow Mountain Community Players.

All seats and performances are $5.

Attendees are encouraged to cheer the hero and boo the villain, during the performance entitled, “Shootout at Hole-in-the Wall.”

Among the diverse activities for families to enjoy is the goat dressing contest.

“That is a lot of fun because it’s a contest that will take place for kids, where we set up a little arena in the park,” she said. “We located a person in Pahrump who has a lot of baby goats, so we thought that would be kind of fun for the kids to do. One of our committee members bought some clothes at the Salvation Army. This will be for kids as young as 5 years old. They have to catch the goats and hold them in place and dress them. I think it will be a great experience for the kids.”

Elefante also mentioned the ever-popular outhouse race, where teams from local agencies and organizations are pitted against one another while pulling an outhouse on wheels.

“This year we have we have staff from the Nye County Sheriff’s Department against members of the Pahrump Valley Fire and Rescue Services team,” she said. “That is so totally awesome to watch. In the past, we have tried to get the banks in town to challenge each other or other groups and agencies. The outhouse race will be on Saturday. Last year they crashed halfway through.”

Additionally, a group from California known as “Guns and Garters” will stage various lighthearted gunfighting skits throughout the weekend, while two rodeos are also part of the western-themed event.

The Pahrump 4-H Club is scheduled to showcase its Doggie Drill Team on Saturday, while on Sunday the organization will display small livestock at the park.

“Of course we will have the Old West setup as usual and just beyond that will be Boot Hill,” Elefante said. “One of the most awesome aspects about this event is the community involvement to make it all happen. You can sit back and enjoy the bluegrass music or go listen to all the great music throughout the weekend.”