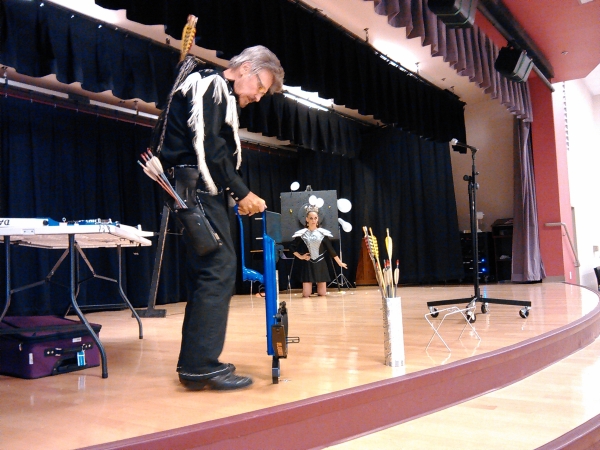 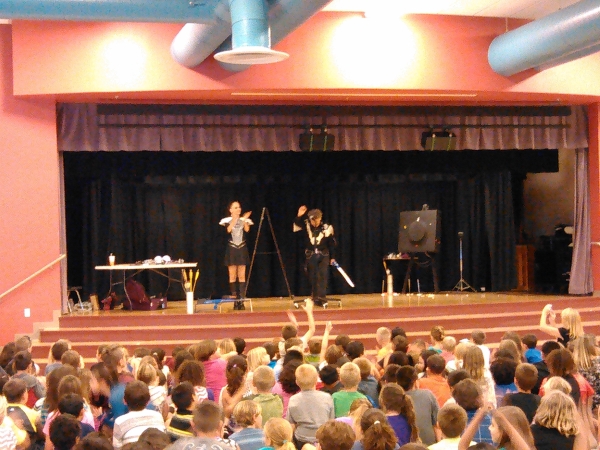 Students and staff at Floyd Elementary were so riveted by the skills of world class archery expert Bob Markworth on Sept. 9, school officials are now planning on implementing the sport as part of their physical education curriculum.

Markworth was the featured performer during last week’s special assembly, where the archer thrilled students as he performed one death-defying challenge after another.

Floyd physical education teacher Lance Englund said Markworth was a natural with the students, who were also taught a few history lessons during the performance.

Englund noted viewing the performance was akin to watching Markworth perform on television, when the archer was invited to compete on the nationally televised talent show, “America’s Got Talent,” last season.

“I thought he was wonderful and very entertaining,” Englund said. “He talked about the history of archery and had numerous different styles of bows to show the kids. He spoke about the need to practice and stay in shape to be an athlete. He also talked about the safety aspect of archery, which was equally important.”

With an assortment of bows and arrows in hand, Markworth was able to capture and maintain the students’ attention in mere seconds, while it would take a teacher several minutes to do the same with a textbook in hand.

Englund said he’s now working on a way to incorporate the sport of archery at the school, as a result of the well-received performance.

“The previous PE teacher at Floyd Elementary had an archery unit for her classes and I plan on doing the same thing when it cools off this fall,” he said. “The students just loved it and it was like sitting in the front row at America’s Got Talent. I know they are excited to see Mr. Markworth at the Pahrump Fall Festival this year.”

Though Markworth’s performance last week provided plenty of assorted tricks, he noted he’s saving some for next week’s Fall Festival routine, where he will perform several different shows during the five-day event.

“It will be about a 10-to-12 minute program with music so it’s kind of a schmaltzy thing,” he said. “I love humor because I feel that it’s very important. I’ve been all over the world and there’s sometimes a language barrier but when you use laughter there is no language barrier, because it’s universal. If you made a person laugh, that means they have enjoyed your company and you’ve enjoyed theirs.”

Humor aside, Markworth said he expects his Fall Festival performances will focus on variety.

“A lot of the shots that I will perform I will change them up and alter them so the people who have already seen the show can come back and see different things during the next show,” he said. “I try to make it as interesting as possible so I save the exciting stuff for the end of the program.”

Joining Markworth on the Fall Festival stage is his ever-present assistant Mayana, who routinely takes part in the more challenging routines, which Markworth noted are never routine.

“She’s new and she’s also a contortionist, a great dancer and a showgirl,” he said. “It’s a pleasure working with her because she is so very professional. Her real name is Julie but I use a generic name for the girl that works with me on stage, so it’s always Bob Markworth and Mayana.”

While performing at the elementary school, Markworth said he was so pleased at the reception, he’s now making plans to visit other schools in the community to teach and perform his skills.

“I develop a program that kids really like because I mix the entertainment with the history of archery as well as teaching them how to shoot,” he said. “Of course I provide overtones of anti-drug ideas to tell the kids. I’ve already contacted the high school and the middle school and I’m still trying to contact the other elementary schools.”

Floyd Elementary students will also receive a bonus from Markworth during the Fall Festival.

When he’s not performing, he’ll have an archery booth where attendees old and young can test their skills with the bow and arrow.

“It’s a shooting booth and both adults and kids can shoot,” he said. “It’ll cost just $5 and they can win prizes. The kids that come with their school ID and tell me they saw my show, I will give them an extra few rounds to shoot or an autographed photo. I have some projects which involve Pahrump where I may open up an archery range where archery is available to every age group within the community.”