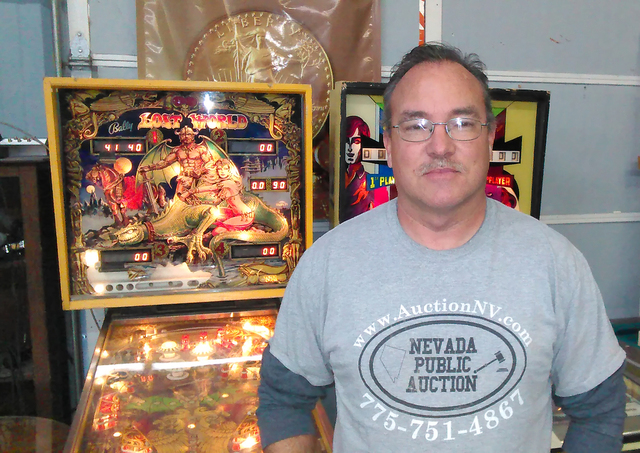 The oldest and largest auction house in Nye County is hosting its first auction of 2017 on Sunday.

Nevada Public Auction owner Ron Chase said hundreds of items will be on the auction block beginning at noon on Sunday.

The business is located at 800 Margaret St.

“Each year we like to start out the New Year with our annual New Year’s Day auction, which is usually one of our bigger auctions of the year,” he said. “This year, we are looking at about 400 lots this Sunday.”

Among the items up for auction are vehicles, antiques and a wide variety of collectibles.

“Right now, we are looking at about seven or eight automobiles, a box truck and at least one Harley Davidson motorcycle,” Chase said. “We are anticipating two more motorcycles for the auction. We also have a tractor and backhoe. It’s kind of hard to say what exactly will be auctioned off in advance because we receive items up to the day before the auction. We have two very nice pinball machines up for auction as well as a pool table.”

“We are not going to do coins for this New Year’s Day auction,” he said. “We are just going to stick with antiques, cars, guns and numerous other items. We have changed it because we get people driving in from Las Vegas who don’t want to sit through the coin portion of the auction.”

Additionally, Chase said an assortment of firearms and knives are also up for bid.

“We will have at least 20 guns up for auction as well as ammunition,” he said. “We also have an estate collection of KA-Bar knives which are absolutely beautiful and it’s one of the nicest knife collections I have seen in a very long time.”

As part of the special auction, Chase said those in attendance can enjoy appetizers throughout the morning.

Those interested can preview the items on Saturday from 9 a.m. to 3 p.m. Bids can also be made online at auctionnv.com.

During that event, Chase said he was able to make a donation to Pahrump’s Toys for Tots organization.

“We got it least 300 toys this year which is quite a load,” he said. “It was very nice because we generated more than last year. The Toys for Tots officials picked them up and distributed them around town and they were very grateful for our donations. I thought it was nice to have our customers come through and donate so many toys and I definitely want to thank my customers for that.”