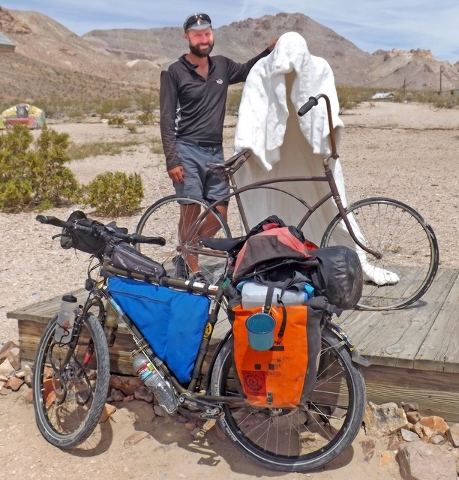 RHYOLITE — Alexander Krauss is having quite an adventure.

The Austrian traveler set out two years ago to explore the Americas by bicycle and arrived at the end of April in Rhyolite.

After working with a mechanic friend to construct a bicycle from parts he gathered from many manufacturers, he started out on April 4, 2013, by flying to Buenos Aires, Argentina.

Roughly following the Andes, he visited many famous spots along the way, including Lake Titicaca, Cuzco, Machu Pichu, and Salar de Ayuni, the highest salt flat in the world.

Sometimes he would spend time in a place getting to know the people and the culture and improving his fluency in Spanish. He said people along the way have been great. He has enjoyed, “getting invited home by complete strangers and being treated like a son—or a child sometimes.”

He has never been robbed or assaulted on the trip.

“Sometimes there were drunks who were annoying, but I just avoided them,” he said.

He took a two-month break at one point when his grandmother died. He flew back to Austria, leaving his bike and equipment in Ayacucho, Peru, later returning to resume his journey.

“I love traveling,” Krauss said. “I tried it before by car or bus, but the places between you can see better by bike. It is exercise as well, and you have time to think about things.

He says that the desert here in southern Nevada reminds him of northern Argentina. He has found the Americas a study in extremes of altitude and climate, “very, very hot or very, very cold.”

Besides the locals who befriended him along the way, he has enjoyed meeting and occasionally traveling a while with other cyclists. He said there are special hostels for cyclists called “casas de cyclistas” in parts of South America.

Sometimes he stays as a guest in homes or in hostels. Other times he camps out. He carries some food and water on his bike. In some places, like Mexico, where it is inexpensive to eat out, he will eat in restaurants.

From Rhyolite, he said he was heading to Las Vegas, then to the Grand Canyon. From there he plans to go to Utah to visit Zion and Bryce Canyon, then on to Colorado, to the continental divide, and then to take a mountainous route into Montana and Wyoming.

He has not decided where to go after that, but he often changes his plans as he learns about new sights to see and places to visit.