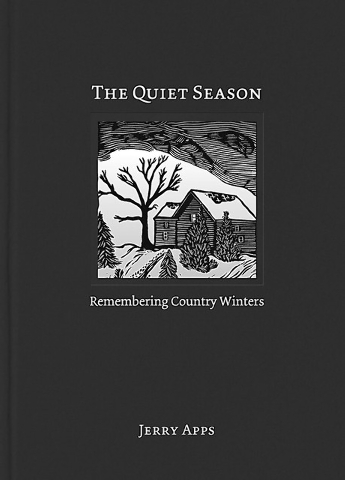 You saw it first thing this morning, and you grumbled. You know how much extra work that stuff is: shoveling, brushing, scraping. Everything needs more time to warm up and get going — including you.

Sure, snow is pretty… for about 10 minutes. Or, as you’ll see in “The Quiet Season” by Jerry Apps, it’s beautiful for a lifetime.

Born to a pair of farmers in the “midst of the Great Depression,” Jerry Apps says that, save but for his time spent in the Army, he’s never missed a Wisconsin winter. For folks in snowy climes, winter reminds us that “we are not in charge,” he says.

The winters of 1939-1947 were particularly memorable for Apps. Electricity hadn’t yet come to his parents’ farm — it didn’t arrive until the spring of ’47 — which meant that milking cows and fetching water was all done by hand. Dinner was made on a wood-burning stove that served both to prepare food and to heat the kitchen. Homework for the three Apps boys was done by kerosene lamp.

Apps remembers how his father prepared for winter by “making wood” from dead oak trees and hauling it closer to the house. The family butchered a hog every fall because they “needed the meat if we were going to survive the long winter.” Produce from garden and field was laid in for the season.

Even when there was a snowstorm, the three Apps boys had to walk to school and they tried not to miss a day. The season’s first snow was especially exciting; says Apps, he and his classmates were “running around like we were possessed by first snowfall demons.” As white stuff piled up, his teacher in the one-room schoolhouse tapped one of the bigger children to shovel a path to the outhouses.

Apps recalls playing in the snow, and wading through waist-high drifts. He remembers hunting in it, travelling by car and on foot through it, and hoping that Santa could handle it. He recalls when neighbors took care of neighbors and dances were held in someone’s dining room. And he remembers the perfection of winter some 70 years ago, its loveliness and its magic.

I’m not sure where it came from, but reading “The Quiet Season” gave me a definite sense of pulse-slowing calmness.

Maybe that’s because author Jerry Apps — who often mentions his love of a good story — is himself the teller of tales that circle around community in a TV-less, packed-calendar-free, horse-drawn but hard-working world that fewer and fewer folks remember. They’re told with awe, gratitude, grace, more than a little knee-slapping — and lots of love for the way things were, the rotation of the seasons, the bounty of the land, and the perseverance of its people.

This is the kind of book that elders will read and read again. It’s a book you’ll want to give to a whiny young adult. It’s one you’ll be glad to curl up with because, though it’s mostly about winter, “The Quiet Season” will leave you warm.