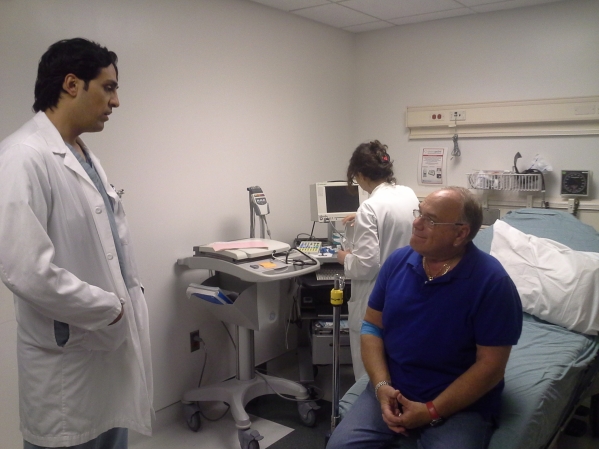 Pahrump resident and business owner Marty Greenfield’s eyes were as sparkling as the diamonds and gemstones displayed in his shop on Tuesday.

The certified appraiser is anxiously awaiting the results of an experimental procedure taken nearly three years ago at the UCLA Medical Center.

Greenfield suffers from angina, a heart condition caused by poor blood flow to the organ.

Since the age of 40, Greenfield has had no less than eight heart attacks, underwent three surgeries, and roughly a dozen or so angiograms.

As a result, Greenfield decided to undergo the experimental procedure on Oct. 17, 2013.

The operation was part of the third phase of a clinical trial called RENEW, which uses a patient’s own blood-derived stem cells to restore blood circulation to their damaged heart.

The trial used the latest technology to map the heart in 3D and guide doctors to administer the stem cell injections to targeted sites in the heart muscle.

Nearly three years after the procedure, he said he feels much better and he’s regained his energy.

“I have been so blessed that my body has been taken to the max on stress levels and working levels and everything else,” he said. “Under normal conditions, three years ago, I would have died of a heart attack.”

Greenfield said this week if the procedure proves to be successful, it would be a huge advance in stem cell therapy.

“We will get the final results at any given time and we’re expecting to hear from Baxter Pharmaceutical Laboratories, or we will get a phone call from UCLA,” he said. “The thing that makes it so remarkable, is that they were originally talking about 444 patients for this program and I am number 112. They stopped the program after me because they felt they got enough data. They called me the perfect patient.”

What made Greenfield the perfect patient, according to doctors, was his physical makeup, which was exactly what the doctors were looking for prior to the study.

“My DNA makeup, my chemical makeup, and physical makeup was everything they were looking for in an ideal patient,” he said. “I didn’t know that in the beginning. I had found out much later that they felt they not only got enough patients, they also found out that I am that ideal person that they can work with their research.”

Although Greenfield and his team of doctors at UCLA were unaware whether he was given a placebo or the actual stem cell therapy, he said he’s pretty certain it was the stem cell treatment he underwent.

A placebo is a harmless pill, medicine, or procedure prescribed more for the psychological benefit to the patient, rather than for any physiological effect, as it’s commonly used as a control in testing new drugs.

Another reason Greenfield said he’s sure he received the stem cell treatment was due to a few side effects he noticed following the treatment, which he noted were quite interesting.

“In the beginning the side effects were abdominal pain and severe neck pain, but they have subsided,” he said. “My body is still producing a tremendous amount of white cells and it’s good in the fact that we know my bone marrow is working and everything is functioning. I ended up with fatigue and flu symptoms. My blood pressure is perfect, but my white cells fight one another and sometimes my hemoglobin drops. I am willing to live with the side effects in order to have a new life which is extremely important to me.”

Additionally, he said, he’s since changed his diet and his family’s support also contributed to his greatly improved condition.

“My girlfriend and my best friend, Elizabeth Sterling, has been with me for over six years and I now have adopted grandchildren and they have accepted me graciously,” he said. “One grandchild who is now 15, just experienced the UCLA Medical Center with us last month because she is going into the medical field and I thought it would be a great experience and she agreed.”

Years prior to the experimental procedure, Greenfield said doctors had just one very risky procedure in mind to save his life.

“When this all first occurred, the doctors told me they could get me on a heart transplant list, but that was not even thought of by doctors at UCLA,” he said. “They said why change the motor, if the motor is working perfectly. It just needs a couple of parts. Coronary artery disease is what my problem is.”

While holding back tears, Greenfield said he obviously has a much different outlook on life in general.

“I was told two or three years ago that I was going to die and it was just a question on when but UCLA put me into this program,” he said. “I appreciate life and don’t forget the little things in life that are so valuable to us all. I look at life differently now because I can walk without shortness of breath and I could be taken to limits where my heart just pumps away and the flow is just incredible.”

The only thing that would put the icing on the cake is receiving the news about the success of the procedure, which Greenfield said would not have happened had the Obama administration not taken action on funding stem cell studies.

Federal funding for stem cell research obtained from human embryos were cut under the George W. Bush administration in 2001.

“I thought it was remarkable that the president resumed federal funding of stem cell research,” he said. “Before all of this occurred, I knew nothing about stem cell research and stem cell therapy because I was totally ignorant. I had heard about it through the Christopher Reeves Foundation when he was paralyzed I never would have thought I would be part of this tremendous research program and actually having it done to me.”