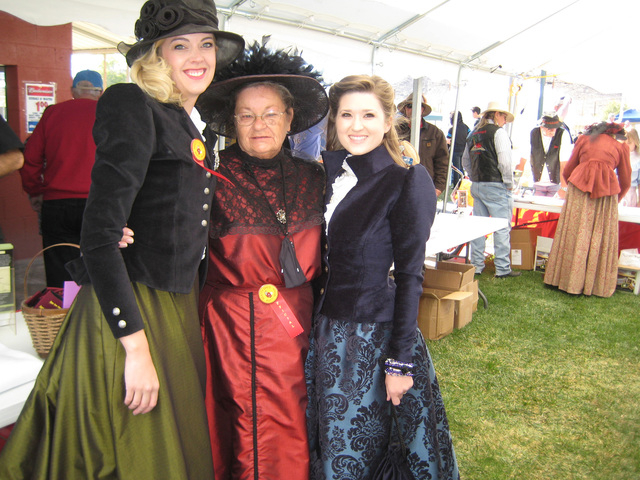 Beatty will celebrate its 109th birthday Oct. 25 – 27 at the Beatty Days celebration.

The event, sponsored by the Beatty Chamber of Commerce, takes place the last weekend of October each year and festivities are scheduled for Cottonwood Park, Third and Amargosa streets, beginning at noon Friday and ending Sunday at 3 p.m.

One event which brings people to Beatty Days from other locations is the sanctioned chili cook-off. The winner of the annual International Chili Society (ICS) regional cook-off automatically advances to the World Championship, where they have the chance to win $25,000.

The cook-off is only open to ICS members but anyone can join by filling out an application with a $50 annual fee. Membership provides eligibility to compete in all ICS events throughout the year.

The first-place winner at Beatty Days will receive a cash prize of $500 for red chili, $300 for verde chili and $100 for the best salsa. The winners with be honored with a plaque, advance to national competition and will hold the bragging rights for one year. The competition should be heated.

Also on Saturday there will be an antique car show, which draws nearly 75 vintage cars, many decorated for the Halloween season and carrying bags of candy for the crowd. The bike show will return Friday this year, with entrants seeking the Judge’s Choice award.

Friday night will kickoff with the crowning of Miss and Jr. Miss Beatty, the bike show, a costume contest, a carved pumpkin contest and live music.

Also on tap for Friday are the tricycle races.

Saturday’s annual parade will honor Co-Grand Marshals Elaine Parker and Zoe Cathcart, former co-owners of the historic Exchange Club in the 60s and 70s and builders of the Burro Inn Casino and Motel back in the 1980’s.

This year’s Sr. King and Queen will be longtime residents Renie and George Younghans. Renie has served a couple of terms on the Beatty Town Advisory Board and her husband George has been the airport support network for the AOPA for the Beatty Airport for many years.

Events back by popular demand are the 5K run and 2K walk, the Bed Races, the Halloween costume contest, trick or treating in the park, and a poker walk. Other fun events returning are the hot dog-eating contest, Mom’s rule-breaking and near-deafening Root Beer Belching contest, the hot, hot Wing Eating contest, and the Pickle-Liquor Hoot-n-Holler.

There will be a antique engine display on the north side of the park and the Model Railroad Exhibition at the community center presented by Las Vegas Garden Railway and the Pahrump Model Railroad Club.

After hours you can dance the rest of the evening away with live music.

The annual Kite Flying Contest will be held in the upper park again this year for all ages.

For a complete listing of events and times go to www.beattynevada.org/BeattyDays2013.htm.