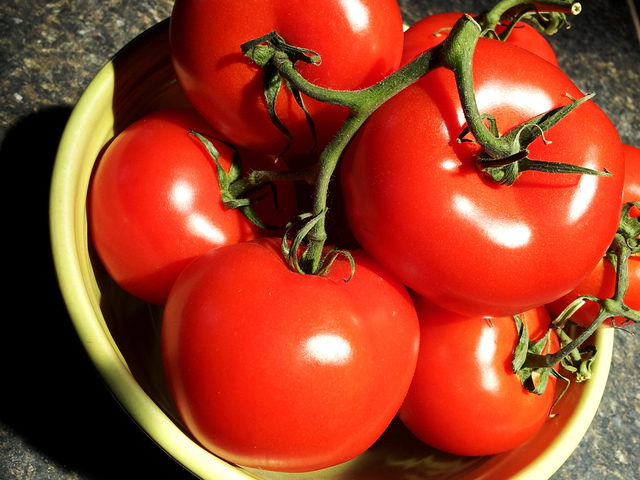 But besides the juicy, ripe sweetness and jewel tone color enriching your salads there are even better reasons to eat this beautiful fruit. Tomatoes are great for your health! Here are some fun facts you may not have known about summer’s most beneficial bounty.

Tomatoes are nutritional powerhouses. Well-known for their vitamin C content, they offer considerable amounts of vitamin A, B vitamins, including riboflavin and niacin, and minerals: magnesium, phosphorous and calcium as well. Tomatoes are also a good source of lutein, chromium, folate and last but not least, fiber.

Vine-ripened tomatoes have more than twice the beta-carotene and vitamin C than those purchased at the store. The reason for this is most purchased tomatoes are picked green to make them easier to transport and to extend shelf life. If you do purchase tomatoes at the store try to buy the ones that are still on the vine.

If you grow your own tomatoes, leave them on the vine and pick them when they’re at their reddest. Lycopene and beta-carotene, both powerful antioxidants, are found in the red pigment of tomatoes. The reddah the bettah.

The highest concentration of vitamin C is found in the jelly-like substance around the seeds so don’t de-seed your tomatoes.

Our friend lycopene is found in large quantities in the cell walls of the tomato and is a powerful antioxidant that helps to protect the cells in our bodies from damage.

When you cook the tomato you release the lycopene so it can do its thang. By the way, its “thang” is reducing the risk of a variety of cancers most notably prostate cancer, but also lung, breast, endometrial, pancreatic, cervical and skin cancers. A diet that includes lots of tomatoes is also known to lower the risk of cardiovascular disease.

Who likes fat? Tomatoes like fat! Lycopene is fat-soluble so to help your body better absorb lycopene cook tomatoes in a little olive oil, butter or other natural fat, or partner up tomatoes with avocados for a super nutrition boost.

We all know spinach contains lots of iron, but did you know that iron found in plants is not easily absorbed by our bodies? What can help with this? You guessed it – tomatoes. The vitamin C in tomatoes can increase iron absorption by up to three times, so you get more benefit from spinach if you combine it with tomatoes or other foods high in vitamin C.

Frugal Foodie Fodder contributed by Patti Diamond, author of Divas On A Dime – Where Frugal, Meets Fabulous! www.divasonadime.com Join us on Facebook at DivasOnADimeDotCom.