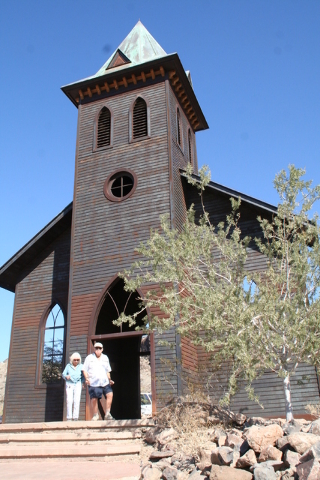 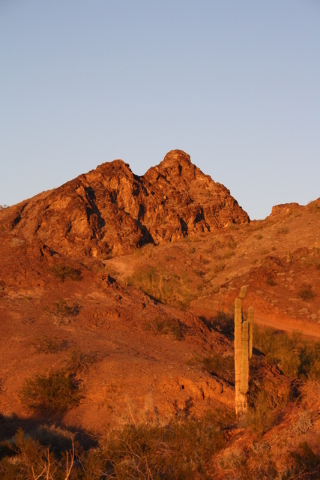 Footloose southern Nevadans travel in all directions of the compass, but tend to reserve southerly excursions for colder months.

You still have time for at least one more trip southward before the weather warms too much.

One of the best for this time of year is to the region around Parker, Arizona, on the lower Colorado River. Only 400 to 450 feet above sea level, it has mild weather most of the winter and plenty of outdoor activities to take advantage of the balmy days.

Of course the area is famous as the location of Parker Dam, one of the engineering marvels of the 1930s. Even from water’s edge below the dam, it does not tower so far overhead as its sister dams farther up the Colorado at Boulder City or Glen Canyon. However, that’s because you are seeing only a quarter of its 320-foot height. It is said to be the deepest dam in the world.

The water pooled behind the dam constitutes Lake Havasu, about 45 miles long, and able to store enough water to supply the principal cities of Southern California as well as Phoenix and Tucson. It was a controversial project in its day, and Arizona actually sent National Guard troops to block construction until it was assured a fair deal for allowing its construction partly on Arizona soil.

Driving south from the dam, along the 18-mile “Parker Strip,” you will find many opportunities to access the Colorado River itself. Some of the best are in the Buckskin Mountain State Park, which offers a beach, as well as areas for camping, picnicking and launching boats.

Parker itself is a small town located within the Colorado River Indian Tribes Reservation, a territory designated in 1865, originally for the Mohave and Chemehuevi people who had lived in the area for many years. Later, Hopi and Navajo people were moved to this reservation, and today all four ethnic groups there maintain separate identities but are recognized as a single tribal unit.

Besides these native peoples, many people of Caucasian and other ethnic groups also reside in and around Parker and the other principal community on the reservation, Poston. The tribal headquarters is located in Parker, and a museum and gift shop are there at 1007 Arizona Ave.

About two miles north of the town, the tribe operates BlueWater Resort and Casino. Besides the standard hotel and casino, the resort features a movie theater, an indoor water park and a marina. It is accessible to passing river traffic as well as motorists.

On March 18-19 the Colorado River Indian Tribes (CRIT) presents Mega Throw XII, a “traditional bird singing and social event.” Bird singing is a form of music traditionally sung by the native Americans of the Southwest. Accompanied by gourd rattles, some of the songs are believed to be thousands of years old. Besides singing, the event will feature traditional dancing, Native American arts and crafts, food vendors and a meal with each visitor contributing a covered dish.

One offbeat attraction of the area is the Nellie E. Saloon and Desert Bar. Spurning conventional wisdom that a convenient location is important to a successful restaurant, the Nellie E. can be reached only by driving five miles into the Buckskin Mountains on a road that is well-maintained. Here a visitor will find a sort of cantina operated on the site of a former mining camp, with antique vehicles still standing about, an outdoor bar, a horseshoe pit, a strange church that is more facade and photo-prop than sanctuary, and plenty of the funkiness and eccentricity endemic to the desert Southwest. A simple menu of burgers, hot dogs and other basic fare is all you will find in the restaurant, but the prices are modest. Bring cash, though, for they take no credit cards. Despite the presence of alcohol, I consider this a destination suitable for children. Unfortunately, it is open only Saturdays and Sundays, October through April, from noon until 6 p.m. Arizona time. Speaking of which, Arizona time is one hour earlier than Nevada during the standard-time season, but agrees with Nevada clocks after March 13, once Daylight Saving Time goes into effect almost everywhere but Arizona. It is best to show up early, for the place fills up quickly most days.

On your trip home, traveling north on AZ 95, consider stopping at the Bill Williams River National Wildlife Refuge. Established in 1941, the refuge was named after a mountain man, trapper and guide active during the 1830s and 1840s.

To reach the choicest part of the refuge, take a right turn onto a gravel road just after you pass the park headquarters on your left. This gravel road passes through a pretty riparian area of cottonwoods and willow, surrounded by cliffs and hills dotted with saguaro and other Sonoran vegetation. Javelinas, gray foxes, desert bighorns, and plenty of other wild animals make homes in the 6,105-acre refuge.

More than 300 bird species have been seen here including the brightly colored Lazuli bunting, yellow-billed cuckoo, vermillion flycatchers and the endangered Southwestern willow flycatcher. Another endangered bird, the Yuma clapper rail, frequents the marshes here, and sometimes even stays the winter.

Established in 1941, the refuge, like the river, was named after a mountain man, trapper and guide active during the 1830s and 1840s. Williams was noted for traveling more widely and seeing more of the West than any other of the famously far-ranging mountain men. An afternoon in this refuge will persuade you, he found the best places.

From Pahrump take NV-160 south about 52 miles to Las Vegas. Merge onto I-215 east and drive about 12 miles. Merge onto US-95 south and drive south through Searchlight to California, about 110 miles, exit onto I-40 going east, crossing the Colorado River into Arizona. Drive about 32 miles. Take AZ 95 south for about 45 miles to the Parker area.

From Parker take AZ 95 north about five miles and then go right onto Cienega Springs Road. Follow the gravel road for five miles to the parking area and saloon. Suitable for most vehicles except during or after rain. www.thedesertbar.com.