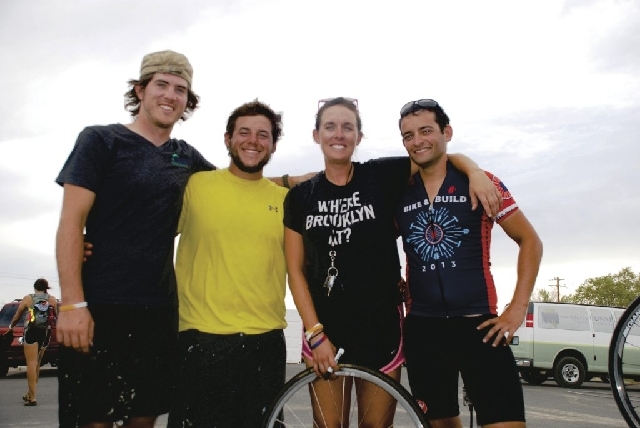 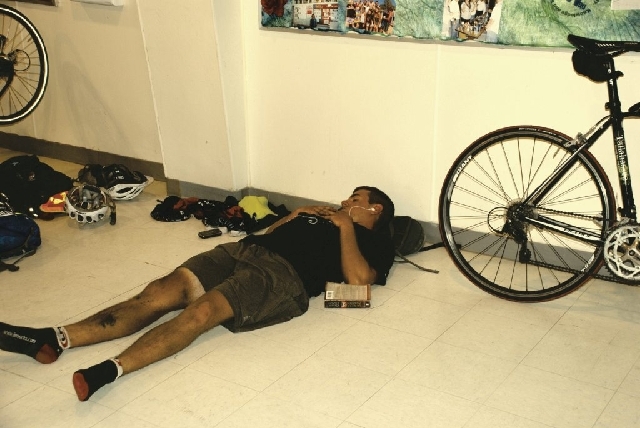 Most people have heard of Habitat for Humanity (HFH), but not many know about Bike and Build, an organization of young volunteers who turn their summer over to biking from East to West, stopping at HFH and other community building efforts to help construct affordable homes for the less fortunate.

Ranging in age from 23 to 76 years of age, 27 volunteers (13 male, 14 female) signed up for the 2013 summer national ride. Almost all of them are attending college, recently graduated or are in an advanced degree program. Most heard about Bike and Build via word-of-mouth on Facebook.

This group met for the first time in Florida. Riders dipped the rear tire of their bikes in the Atlantic Ocean and began the 4,000-mile ride to Santa Cruz, Calif., where they will dip their front tires in the Pacific Ocean and end their experience.

On Sunday, July 21, the 27 members rode into Pahrump from Boulder City, about an 80-mile ride on a hot, humid and stormy day. They are only two weeks away from their final destination on the California coast.

“It is bittersweet,” said Bike and Build Director Kelly Kraft. “We become very close along the route, so it will be good to get a good rest in our own beds and have a lot of memories, but it will be very difficult to see it come to an end.” This is the second Bike and Build national ride for Kraft, who is from New Jersey.

Typical of other stopover locations throughout the nation, local organizations provide food and overnight lodging. Here, the group stopped at NyE Communities Coalition Campus, where Fidelis Church provided dinner from China Wok. St. Martins in the Desert Episcopal Church found lodging for each of the riders.

The experience with Bike and Build is not for the faint of heart. Before starting the trip, riders must raise at least $4,500.

Bike and Build donates a majority of the money to youth-led housing projects across the country, and provides a bike for each rider.

The riders keep the bikes at the end of the ride. The funds also pay for part of the three-month ride expenses.

Riders must also contribute at least 10 hours helping on a construction site, and log 500 miles of riding on “their” bike before starting the trip. Training is provided by Bike and Build.

In the two weeks remaining, riders have two more “builds,” in Modesto and Ridgecrest, Calif., both are HFH homes.

The group gets up at 5:15 a.m. daily and stops riding at 4:30 p.m. There are breaks for lunch and rest through the day and riders go at their own pace. Some arrive an hour before others but a tracker keeps watch and everyone is accounted for.

Three have dropped out: one due to illness, one from a collision with a car that resulted in a broken elbow and one from fatigue.

Reasons for spending a summer vacation riding a bike across the country to help build houses vary.

At age 25, one of this year’s riders just finished his Master’s degree in public health and was inspired to do the Bike and Build ride because, “It’s a way to learn more about the national community.”

One 23 year old spoke of living many different places in his youth and not really having a home and was inspired to be part of an organization that creates homes for people who wouldn’t have them otherwise.

Some talked about the sense of having a goal and achieving it as a good base on which to build a life, others about giving back for having had many opportunities others have not.

For those interested in participating or contributing, either the Facebook page or www.bikeandbuild.org is a good place to start.

The organization is 10 years old and has in that time contributed more than $4 million to housing groups to fund projects planned and executed by young riders like those who made this year’s journey coast to coast.

Leaders on this trip said riding the long miles and introducing young adults to involvement in community activities in a way they can see the difference they are making, “creates incremental service opportunities among young adults that empowers them, with the hope that they will continue to do the same for others.”