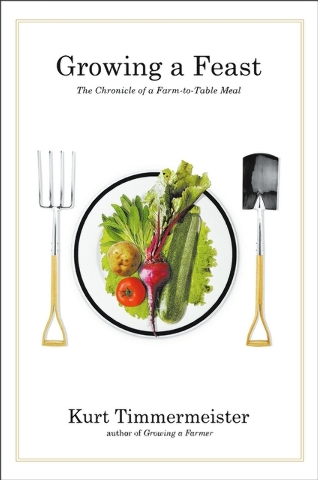 You got it at the grocery store on the way home from work: neat little strips adhered to a rectangle of cardboard, wrapped in plastic. Some bread, a hothouse tomato, a head of lettuce, and you’re set.

So where does your food come from? Go ahead. Point to the grocery store, then read “Growing a Feast” by Kurt Timmermeister, and follow along with one scrumptious meal…

On a Sunday evening not long ago, Kurt Timmermeister decided to have a dinner party for friends. Years before, he’d run a restaurant on his island farm near Seattle, but since he’d closed his French doors to diners, he realized that he missed cooking for a crowd. It would take a lot of preparation — and yet, dinner that night, with its formidable menu, started some two years prior with the birth of a calf.

When a heifer is born on a farm, it’s cause for celebration. Heifers grow up to be cows that give milk to make cheese, the main income for Kurtwood Farms. So when Alice (the name given to the calf) was born to a Jersey cow named Dinah, Timmermeister was pleased.

Alice was born in later fall, which is usually a quieter time on the farm. Still, there are things to do: as winter replaces fall and spring creeps in, Timmermeister and his hired men tend livestock, and they begin to prepare for the garden by mixing compost with soil and planting seeds in a ramshackle greenhouse.

Fruits, vegetables, and meat needed for his dishes are mostly grown on the farm, although Timmermeister sheepishly admits to bartering for some of his seedlings.

As summer eases into fall, and then another year passes, Alice matures enough to birth calves of her own. Other livestock have come and gone, Timmermeister made and stored dozens of cheeses in the interim, canned and processed vegetables, and he harvested honey. He also butchered a steer for meat.

And on a Sunday afternoon not long ago, final preparations for a lavish meal began…

If it’s possible to fall deeply in love with words, I believe I have done so with author Kurt Timmermeister’s.

Despite descriptions of hard physical work and chores he’d rather not be doing, there’s a sure lushness to “Growing a Feast.” Timmermeister shares his gentle life: getting to know his cows, nurturing his formidable garden; and dreaming of the meals that will come from his current efforts.

But the bucolic pages of Timmermeister’s book belie the loss, worry, hard decisions, death and necessary destruction that come on a farm. We get mere peeks at the difficult things about agriculture-based life that may shock city readers, but of which farmers are all too familiar.

And yet – you have to love a book that makes you want to wiggle your bare toes in the grass, eat sumptuously, or try a new, challenging recipe. I sure did – and if you’re a gardener, farmer, or cook, “Growing a Feast” is a book you’ll want to bring home, too.