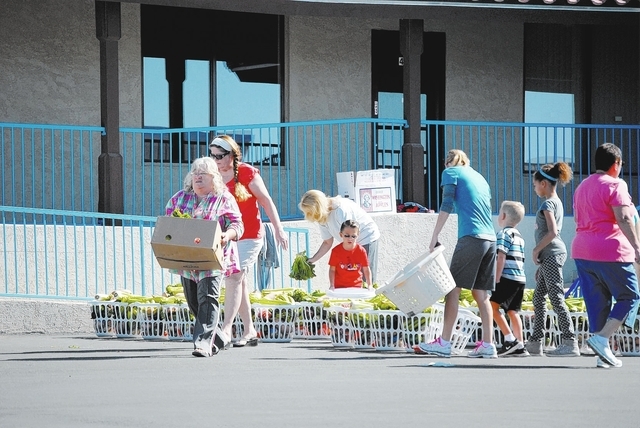 Having a garden is a wonderful thing. People have the option of growing what they want to eat. Many gardens planted in the desert fall prey to wind burn, rabbits, insects and over or under watering, all of which can destroy a garden in 24 hours by the time gardeners discover the damage.

Local resident Nikki McPherson said those circumstances were what made her look for other alternatives to eating fresh and led her to discover Bountiful Baskets. “I planted a garden and didn’t get anything out of it. I had friends who were getting produce from Bountiful Baskets but they didn’t have a drop-off here. When I signed up, we had to take turns driving to Beatty.”

Bountiful Baskets will establish a drop-off location if there is enough interest in its service to warrant sending a truck out from Las Vegas.

The grassroots organization is a nonprofit cooperative which allows its members to pool their money and get fresh produce for less.

McPherson, a volunteer, said she saw an increase in the number of people from Pahrump making the trip to Beatty to pick up produce and decided to start a local site. “I didn’t know at the time that Lyn Turnbull, who is also a BB volunteer, was doing the same thing.

“We ran into each other and joined forces to get a site set up for Pahrump.”

Now the truck arrives at Wheeler Springs Plaza every Saturday loaded with cases of fresh produce, which founders Tanya Jolly and Sally Stevens of Arizona, have purchased in bulk. There are BB locations in 23 states.

Volunteers sort the produce into white laundry baskets for distribution to the members who have ordered a basket for that week. Members bring their own bags or boxes to tote their produce home. BB keeps the laundry baskets.

McPherson said a “site” refers to where you order on the Internet. Pahrump now has two, each can accommodate 96 orders and when it has taken the allotted orders, the “site” closes. She also said if there is enough interest, she and Turnbull can get another site added.

Here’s how it works. Those interested should go to bountifulbaskets.org and open an account. All ordering is done online and payments are referred to as “donations.” There is a link for first-time participants and detailed instructions are available.

After you become a member, you will be able to find your state and then your location. When you click on the baskets for Pahrump, it will take you to the order form where you can order a basket and choose from any number of other items.

The sites open Monday at noon and close when either the orders are full or the deadline has been reached. The site only stays open for about 36 hours.

Just ordering a basket will cost $15 and you get whatever is fresh and in season. It may contain lettuce and avocados, tomatoes and onions, potatoes and green beans, celery and peppers, sweet potatoes and mangoes, apples and pears, bananas and grapes, casaba melons and cantaloupe, among other fruits and vegetables.

McPherson added, “There are also specialty packs that come with a standard basket. Like the Italian pack will have the fresh oregano and basil, dried porcini mushrooms and other things Italian. We get Mexican packs, too.”

You won’t know what will be in the standard basket until it arrives for pick-up. The motto on the website states, “Half vegetables, half fruit and 100 percent healthy.”

However, there are add-ons available. For instance, McPherson said you can order a basket of artisan breads in whole wheat, rolls, sourdough, French baguettes, sometimes 12-grain bread and other choices. There are also natural cereals and granola.

McPherson said she and Turnbull have made a list of what came in their weekly basket and taken that list to the local supermarkets to see how much money they were saving. “I save between $15 and $30 on every basket,” McPherson said. “It’s well worth the time and effort that goes into distributing the food.”

She alternates Saturdays with Turnbull sorting and distributing the food. She said, “The number of baskets varies. We have weeks with as few as 30 and as many as 96. Two weeks ago I sorted food for 80 baskets.” She said 12 to 20 volunteers work each Saturday to get the food sorted quickly.