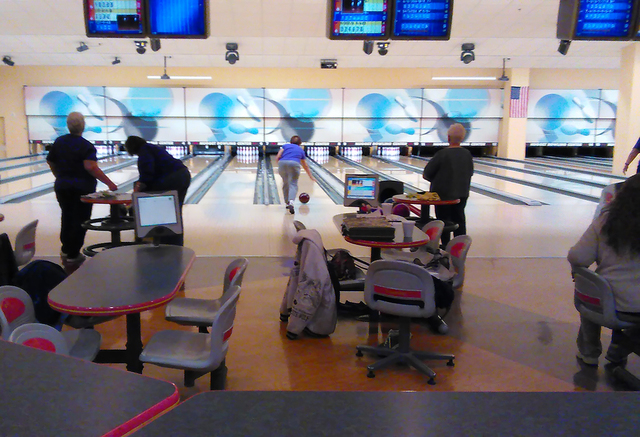 On Sunday, the second annual Wounded Warrior Project Bowl-a-Thon fundraiser will take place at the Pahrump Nugget bowling alley from 2 p.m. to 5 p.m. All are invited to participate. Selwyn Harris/Pahrump Valley Times

Turning a successful 7-10 split into a spare in bowling is a difficult feat to accomplish, but not as difficult as providing adequate care to area veterans, according to Denise Flanagan of Pahrump’s Wounded Warrior Project.

The agency is hosting its second annual Wounded Warrior Bowl-A-Thon on Sunday at the Pahrump Nugget Bowling Alley.

The Wounded Warrior Project is a charity and veterans’ service organization, offering a variety of programs, services and events for veterans wounded during military actions following the 9/11 terrorist attacks.

“So far we’ve signed on 30 people, but you don’t have to sign up beforehand,” she said. “Last year, we had 28 people pre-enroll, but we ended up having more than 200 bowlers. People can feel free to sign up on the same day if they choose to.”

The cost for the three-hour event is $10, which includes three games of nine-pin, no-tap bowling and bowling shoes.

Entrants may use their own balls or choose from the bowling alley’s selection.

Aside from enjoying a relaxing afternoon of bowling, Flanagan also said attendees will have a chance at several raffle prizes up for grabs as well.

“We have some very nice raffles this year, from the likes of area businesses in the community,” she said. “The Pahrump Valley Winery gave us a lot of raffle prizes. We will have raffle tickets for oil changes and Jewelry of Romance gave us a $100 gift certificate. We also have prizes from various restaurants here in town and gym memberships.”

Flanagan said she is hoping to surpass the inaugural event last year, which generated a hefty sum for the project.

“Last year we raised $2,500 and that was awesome,” she said. “Obviously we are looking to beat that total this year. What I’ve learned from last year is that a lot of people came and they just want to take part in the raffle but didn’t want to bowl, which is fine.”

Additionally, Flanagan, who actually participated in last year’s event, said she entered into a friendly competition with a fellow bowler who displayed some fairly keen skills for the sport.

“There is no age limit to participate in the bowl-a-thon,” she said. “Last year, we had a 5-year-old who actually outbowled me. It was incredible because the child did not even have lane bumpers raised. I was also surprised last year because there had never been a local event held for the Wounded Warrior Project. Pahrump is very supportive of various charities so it just surprised me and of course being a veteran, this project is one of my passions.”

Judging from last year’s turnout and the fact that they already have close to 30 bowlers signed on at present, Flanagan said she’s anticipating a big response on Sunday.

She also gave thanks to the venue’s staff for supporting the event.

“I have to thank Lori Hartwell at the bowling alley, who is just so very supportive of any charity here in the community and I could not do this without her,” she said. “It’s unfortunate that we have to hold fundraising benefits such as this for our wounded warriors. The government should take care of our wounded soldiers, especially those who are suffering from PTSD. Whatever I can do to help, I will do it.”