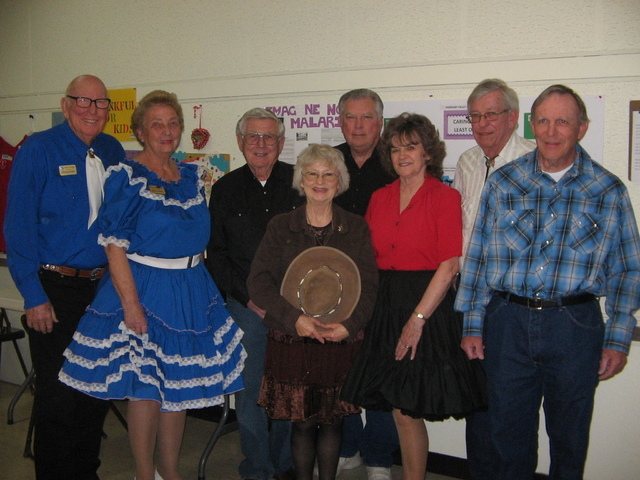 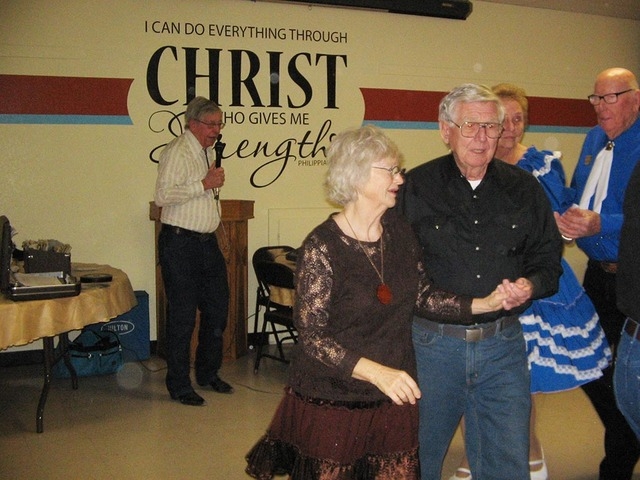 “Do si do,” “swing your partner,” and “promenade” are some examples of the language of square dancing which is popular worldwide.

Every week Wayne Walker puts these directions to music as the caller for the Desert Squares, a square dance club sponsored by the Pahrump Arts Council.

Walker is now “calling” on others to join the group, which meets Thursday evenings at the Pahrump Valley United Methodist Church, located at 1300 E. Highway 372.

He started calling for the group about two years ago. Until then, the group was dancing and taking directions from CDs, which were repetitious. Walker added some “live” calls and music for the square dancers’ pleasure and progress in learning new movements.

Walker started square dancing with the Swinging Stars in Las Vegas at his church in 1968 after returning from Vietnam and friends invited him to join.

He has even danced at Disneyland as part of the 2001 National Square Dancing Convention in Anaheim, California.

Georgia and Gaylon Hutchens have been square dancing for eight years, starting in central California before moving to Pahrump about two years ago when they joined Desert Squares.

“It’s a lot of fun, you meet a lot of nice people,” Georgia Hutchens said.

Husband Gaylon did some square dancing as a kid in grammar school, but didn’t really get serious about it until he retired.

“We had some close friends that had been square dancing for years and we said ‘what do we have to do to learn to square dance,’” Gaylon Hutchens said.

They joined a beginners class dancing in three separate clubs in California and quickly advanced to the plus level.

“It’s good clean fun, you know, there’s no alcoholic beverages at the square dances or anything like that, so you don’t have to worry about, you know, people that drink too much. It’s just a lot of fun.” Gaylon Hutchens added.

“Like everybody else is saying, it’s a lot of fun, you meet different people, you get to go to different sites, good exercise.” Lloyd Prochnow said.

Prochnow’s wife, Barbara, sums up the best part of being a square dancer, “Because it’s so darn much fun, and if we make a mistake, well, then there’s a lot of laughing and we just know how to make a little fun at ourselves,” she added.

The group has performed demo dances for seniors at area assisted-living centers, at the Fall Festival, for the Pahrump Arts Council and during Shoshone Days last fall.

Jim and Midge Benedict saw an ad for the Desert Squares in the Pahrump Valley Times a few years ago and that is how they started square dancing. Like the others, they said they have lots of fun and get to meet new people.

“It’s really not the steps, it’s how you have to move around the square, you really just kind of shuffle your feet,” Benedict said.

“Everybody’s very helpful. I mean if we have new people come in, we help them to learn how to dance,” Midge Benedict stated.

Two squares of four couples each, or a total of 16 dancers move in and around the squares based on the cues of the caller.

“The most difficult part about it really is getting the people back where they started back home in their home position with their partner,” Walker said.

There are about 69 families of calls, or actually 150 directions Walker can vocalize such as “circle left” or “circle right” to direct the dancers in various turns and patterns.

Square dancing is taught in English throughout the world, because they haven’t figured out how to translate “do si do” into Japanese,” Walker said.

“It’s interesting, there’s a lot of things to learn, but it’s fun learning it, and a lot of nice people,” dancer Bill Almassy said. “It’s challenging to remember it all, but the more you do it, the easier it gets.”

One of the newest members is Amy Green, who is visually impaired and got involved with the Desert Squares since moving from California.

Walker will sometimes use Green to demonstrate a move which gives her a “body memory” of the movement.

“There are some things that you can’t do because you are blind, but square dancing certainly isn’t one of them,” Green said. “As long as you can tell your left from your right, you’re okay.”

About half of the states have made square dancing their state dance.

Linda Hartweg is with the Oasis Squares in Fallon. She and State Assemblywoman Dr. Robin Titus of Lyon and Churchill counties are trying to get square dancing legislated as the state dance of Nevada. They came close to achieving that goal last year.

During the upcoming Silver State Square and Round Dance Festival from May 6-8 in Reno, Nevada residents will be able to sign a petition endorsing square dancing as Nevada’s state dance.

“It’s good exercise, it’s quite a stress reliever,” Hartweg said. “You get out and start square dancing during an evening and you just forget your troubles.”

No special shoes or attire are required for practice. Casual is best. Couples usually wear matching outfits when dancing at a demo or festival.

Georgia Hutchens said dancers can purchase outfits at very reasonable prices, so you don’t have to spend a lot of money.

The Desert Squares is seeking for new members: singles, couples, and families including children ages 10 and above. The mainstream and plus dancers meet at 5 p.m., beginners at 6 p.m. A new beginners’ class will be starting Thursday, April 7. For more information contact Wayne Walker at 702-403-2146.