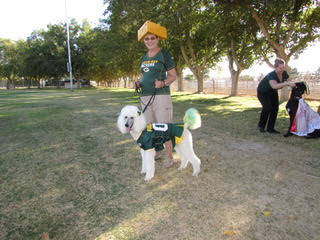 Mary Foley/Special to the Pahrump Valley Times Holly Henseler and her dog River, (aka River Song, is a 2 year old Standard Poodle from Pahrump Valley Obedience Club.) Holly and her dog won the Halloween costume contest for best theme at the 10th Annual Obedience and Rally Trials at Petrack Park. The event was held from Oct. 27-29. 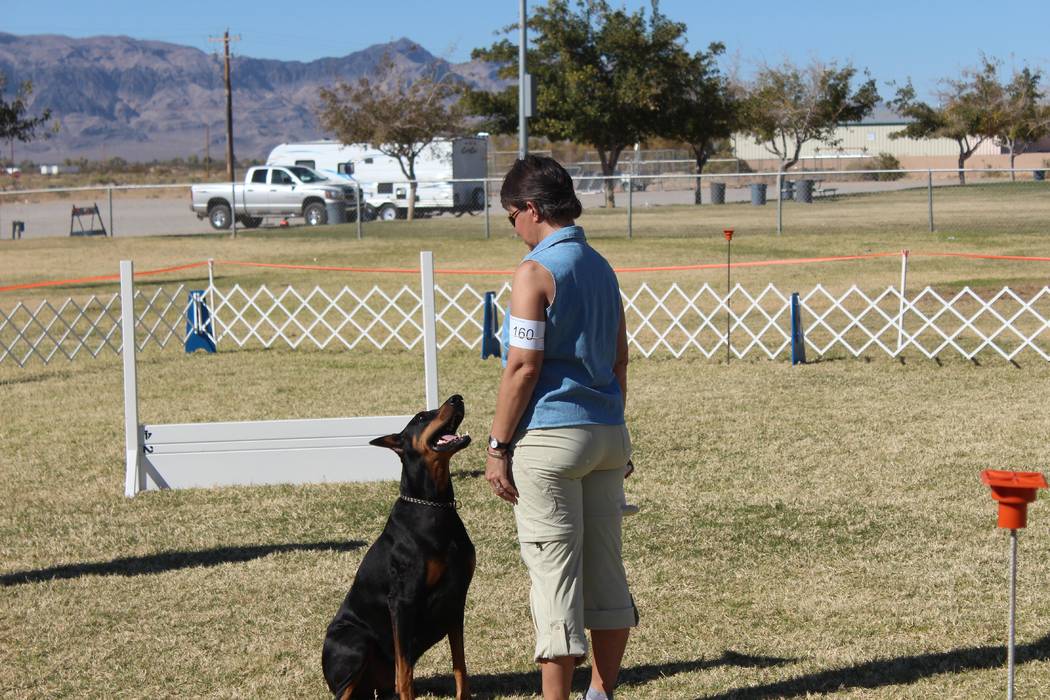 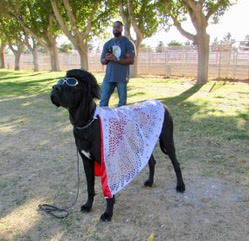 Mary Foley/Special to the Pahrump Valley Times Elvis Whittle (front) is a 21-month-old great Dane, owners Wendy and Dax Whittle, members of the Pahrump Valley Obedience Club PVOC, dressed for a Halloween costume contest for the 10th Annual Obedience and Rally Trials at Petrack Park on Oct. 28, 2017. Dax Whittle is in the background. The three-day event was presented by the PVOC from Oct. 27-29. 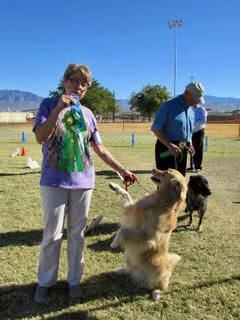 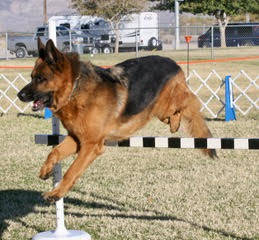 Mary Foley/Special to the Pahrump Valley Times Kaiser Murray (aka Kaiser v Bullinger) jumps over a hurdle at the 10th Annual Obedience & Rally Trials, held Oct. 27-29. Kaiser if owned by Kathy Murray from Salt Lake City, Utah and has titles in obedience and tracking. 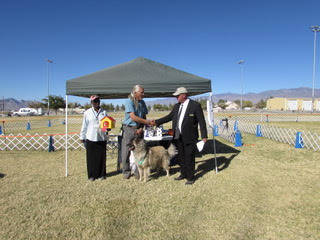 Mary Foley/Special to the Pahrump Valley Times Tynia Dickson (left), new director of dog training and chief steward for the Pahrump Valley Obedience Club, Arthur Bell (center), owner of Levi (front), stand next to Curt Curtis, a judge for the 10th Annual Obedience & Rally Trials. Levi, a Belgian Tervuren, was first for the high-scoring dog from the herding group in obedience. 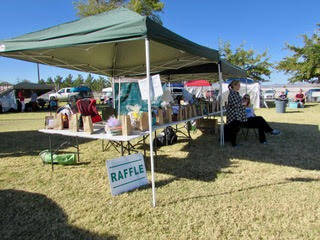 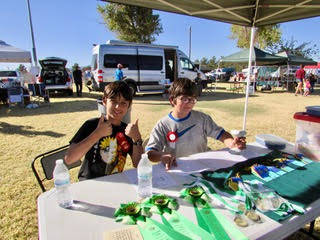 Mary Foley/Special to the Pahrump Valley Times Ivan Preston (left) and Ethan Dickson (right) function as ring stewards at the 10th Annual Obedience & Rally Trials, held Oct. 27-29, provided service to judges in helping set up obstacles and jumps in addition to helping with the smooth flow of participant entry and exit from the ring. 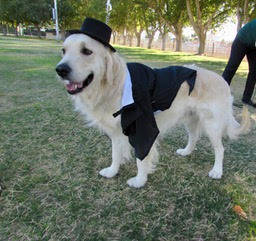 Mary Foley/Special to the Pahrump Valley Times Charlie was entered into a Halloween costume contest during the 10th Annual Obedience & Rally Trials at Petrack Park on Oct. 28, 2017. Charlie, who has awards in the beginner novice class in obedience and the novice class in rally, is owned by Patricia Schoeb. 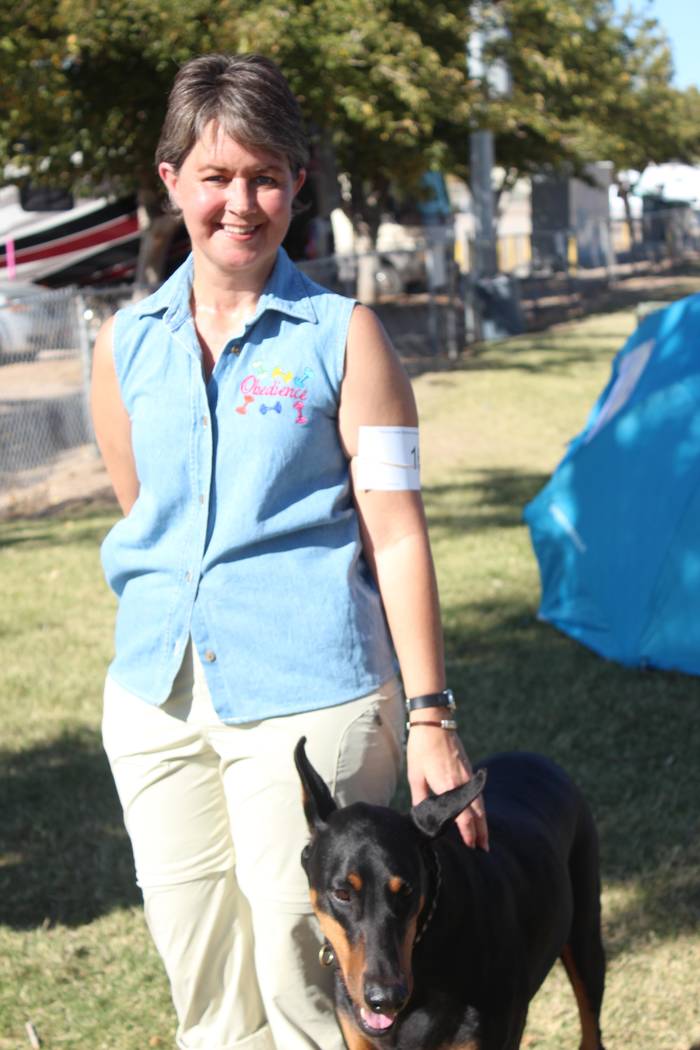 Jeffrey Meehan/Pahrump Valley Times Janet Wagner (left), stands next to her doberman pinscher Bakar's Ready for the Ride (right), who won first place in the preferred novice class for obedience in the 10th Annual Obedience and Rally Trials at Petrack Park on Oct. 27, 2017. The three-day event was put on by the Pahrump Valley Obedience Club from Oct. 27-29.

Owners of canines from the local, regional and other areas brought their animals out to Petrack Park at the end of October to test their attentiveness and agility.

From the small to the large, each dog fought for the acquisition of ribbons and trophies and other prizes.

Canines and their owners, gave it their all during the 10th Annual Obedience and Rally Trials—presented by the Pahrump Valley Obedience Club (PVOC).

The three-day American Kennel Club-sanctioned event at Petrack Park, which was held Oct. 27-29, had 194 entries in various obedience and rally exercises. The canines competed for various prizes, ribbons and trophies and other prizes and statuses.

Helen Schneider, president of the Pahrump Valley Obedience Club, said owners were local and from neighboring Las Vegas, along with some traveling from places such as Arizona, California and Utah.

Schneider explained that the dogs can compete on two different tracks: obedience and rally, each with different qualifications. Prizes and trophies were handed out to some dogs, but dogs also competed for AKC titles.

Besides all the seriousness of competition, dog owners and dogs dressed up for a Halloween competition.

On the obedience track, judges instruct owners/trainers what action they must do. That differs from the rally track, where owner/trainers must follow signs for direction on how to move around the course.

“In order to get a title on this one (obedience), and a title over there (in rally), you have to get what they call three legs,” Schneider said.

The three-leg system is an American Kennel Club requirement, she added.

Essentially, this means that a dog must qualify in its class three times, in either rally or obedience, in order to receive a title from AKC.

That’s why the event is three days, where a chance to qualify is available once each day.

Also, the dogs must be judged by at least two judges to qualify for an AKC title.

Each track in rally and obedience has a different set of things dogs are judged on and can potentially lose points on.

The competition attracted many different breeds, from Yorkshire terriers to Dobermans and others.

Purebred and mixed-breeds were both eligible to receive titles from the AKC and awards at the event.

If the dog is purebred, also known as a conformation dog, their title goes in front of their name in the AKC listings, Schneider said.

For mixed breeds, the title goes in the back of their name, she added.

Judges for the competition also go through their own qualifications.

“They (judges) have to participate in these trials before they get their judgeship, and they have to learn under somebody,” Schneider said.

The judges for the 2017 event were Karly Curtis and Curt Curtis of Salem, Oregon.

The grace of many of the dogs that sit on command, move in unison with their owner/trainer without argument and other synchronic behaviors between owner/trainer and dog, don’t show the work that goes into getting to that level.

“It’s a lot harder than it would appear to be,” Janet Wagner, a 20-year veteran trainer, said.

Wagner entered her Doberman Pinscher, Bakar’s Ready for the Ride, in October and took first in the obedience track for the preferred novice category on the first day of competition.

Wagner explained that it’s easy for dogs to do exercises in a familiar area.

“It’s going to someplace different that is the hard part, especially with Dobermans, who are a guard breed,” she said.

The Pahrump Valley Obedience Club doesn’t just do a single event each year.

The obedience club holds their general meeting on the third Tuesday of each month, except December, in the Bob Ruud Community Center at 150 N. Highway 160 at 7 p.m.

Annual membership costs run $10 per year for adults and $5 for an associate membership for those under 18.

Membership includes monthly meetings, lunch dates, a Christmas party, play days and other offerings, according to the group’s website.

The next six-week session starts in January, and you don’t have to be a club member.

If someone purchases a dog at the shelter, they may be able to get a free class.

“Our purpose is to encourage responsible dog ownership,” Schneider said.