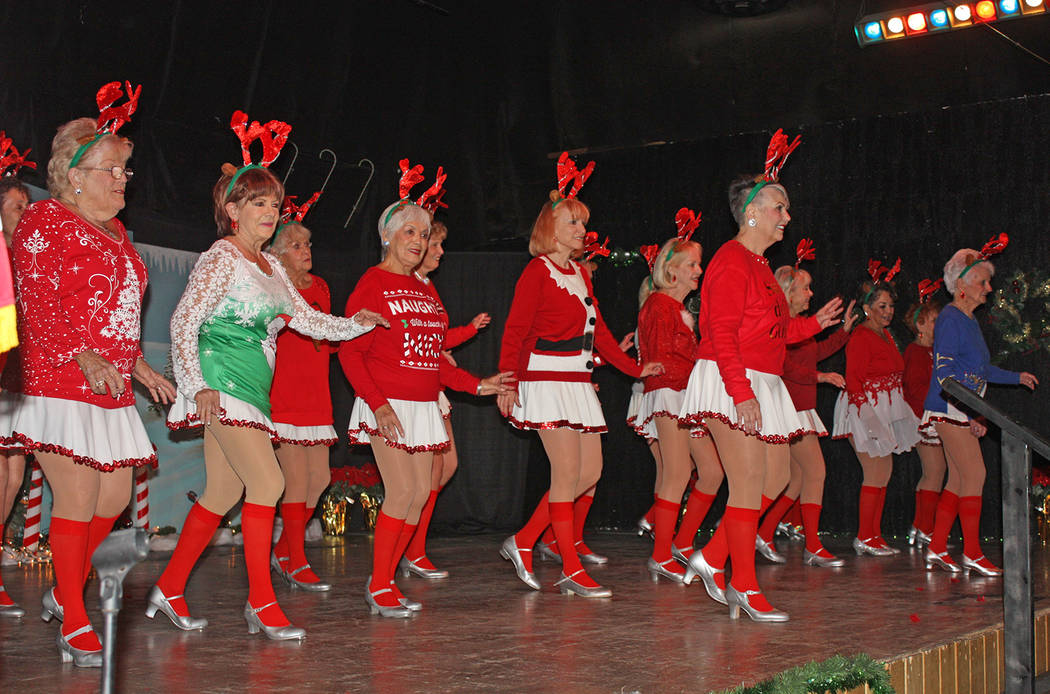 Robin Hebrock/Pahrump Valley Times Decked out in Christmas style, the ladies of the Nevada Silver Tappers put on a fabulous show for the community on Dec. 8. The fundraiser brought in thousands to support two local nonprofits. 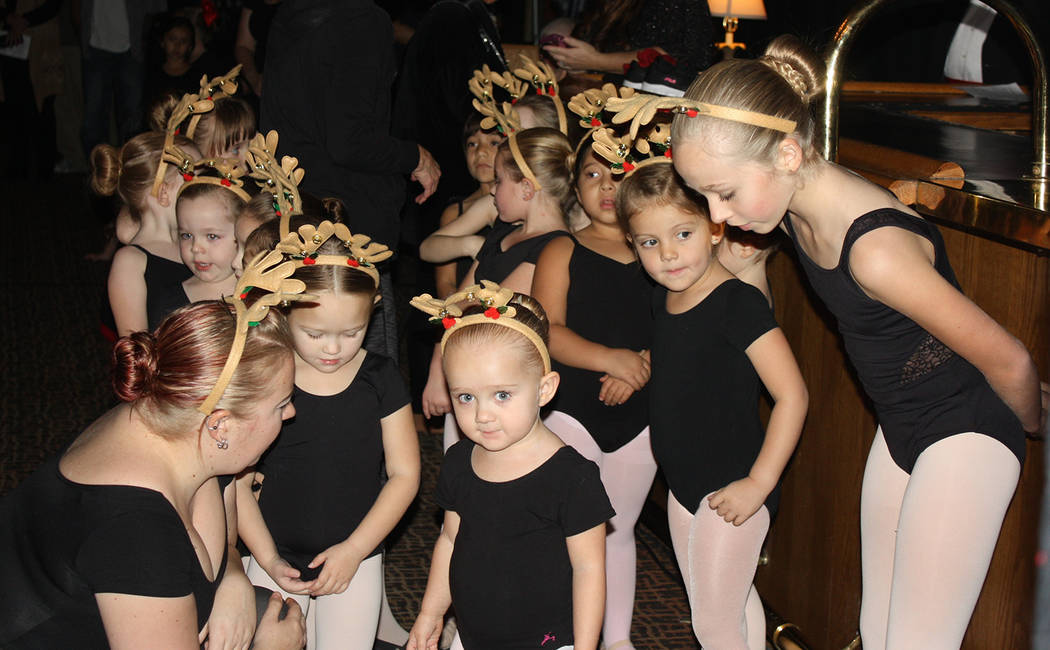 Robin Hebrock/Pahrump Valley Times The Pre-Ballet Dancers from Donna's Dance Studio are pictured awaiting the moment when they would take to the stage. 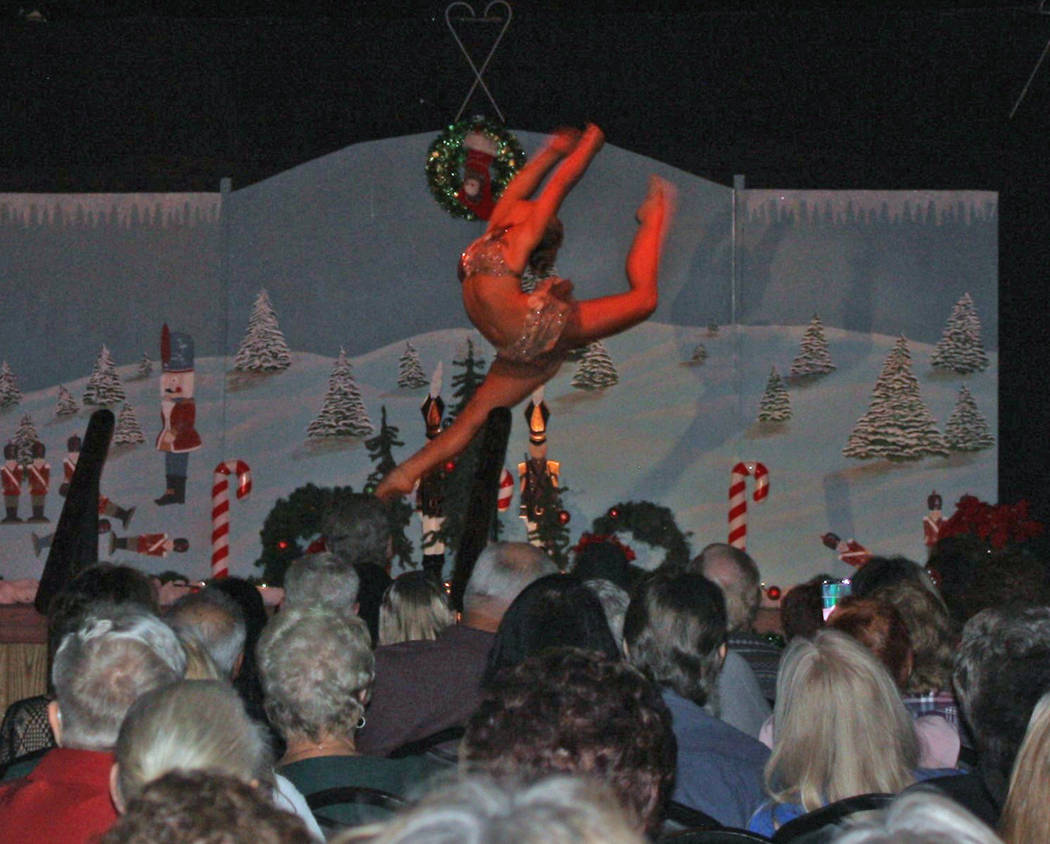 Robin Hebrock/Pahrump Valley Times One of the young ladies from the Nevada Dance Center flies gracefully through the air during her performance at the 28th Annual Christmas Benefit Show. 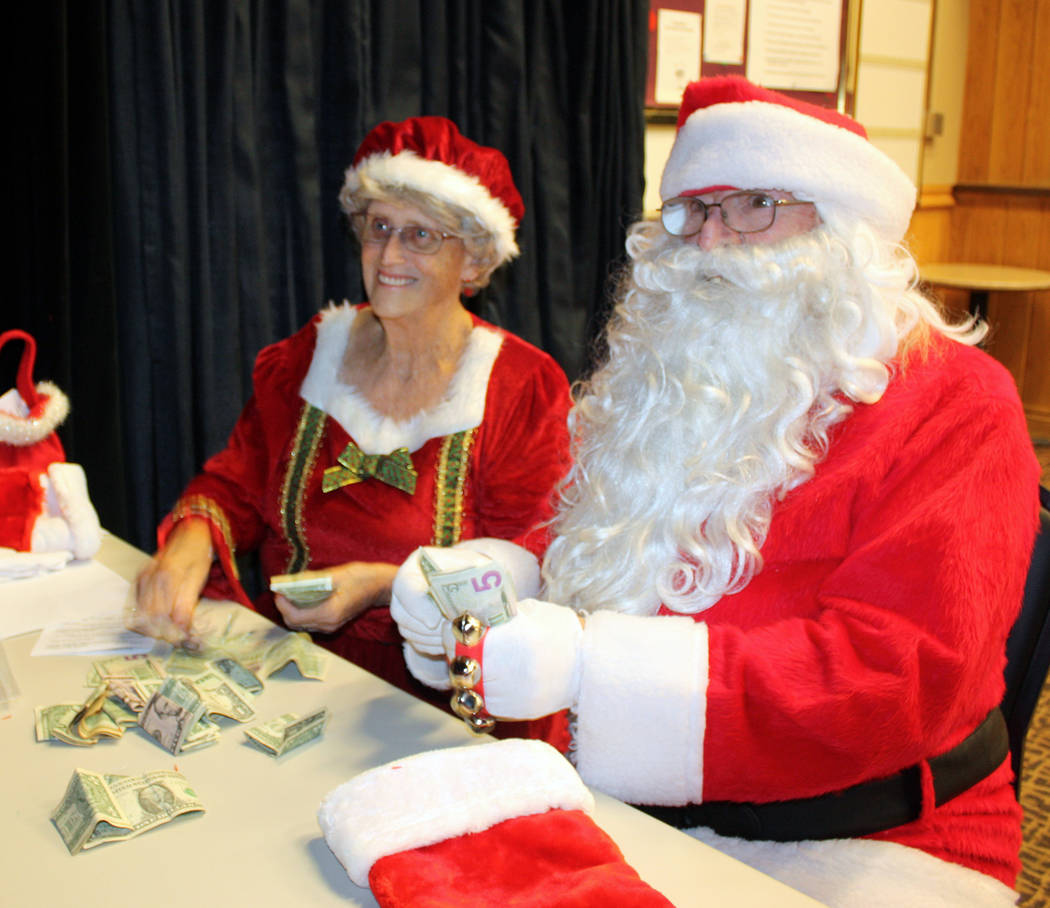 Robin Hebrock/Pahrump Valley Times Pam and Phil Raneri embodied Santa and Mrs. Claus. The two are shown counting up all of the additional donations given during the Nevada Silver Tapper's fundraiser show hosted Dec. 8. 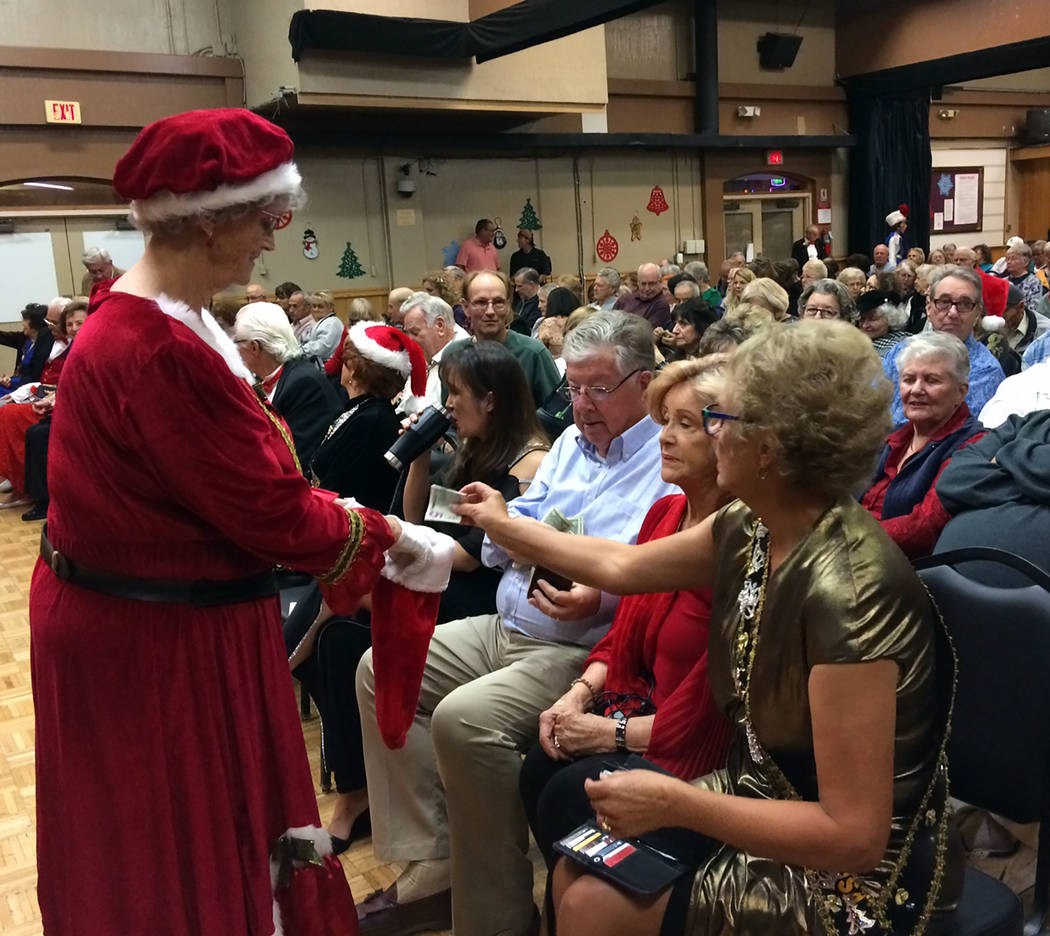 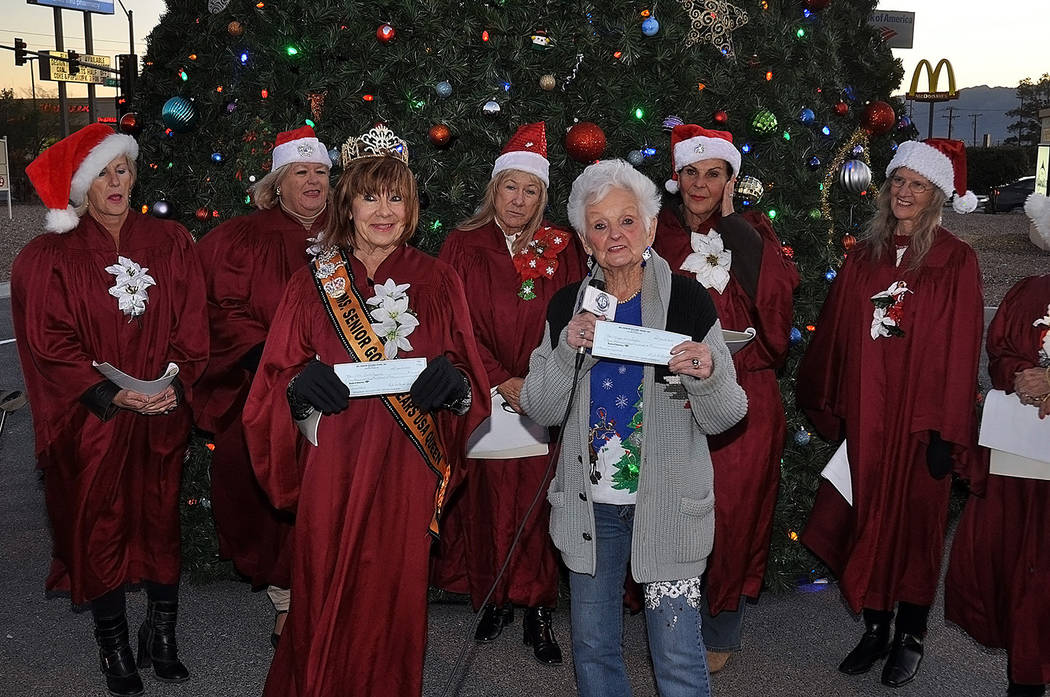 Horace Langford Jr./Pahrump Valley Times Following the 28th Annual Christmas Benefit Show Nevada Silver Tappers and Ms. Senior Golden Years founder B.J. Hetrick-Irwin posed with her ladies before the Community Christmas Tree and announced that a total of $2,200 would go to Meals on Wheels and another $2,200 would go to the veterans food pantry.

It was a magical night of entertainment for those attending the 28th Annual Christmas Benefit Show, hosted by the Nevada Silver Tappers.

The yearly fundraiser brought a host of talent from across the Pahrump Valley, spanning generations from tiny tots to senior performers, all off whom gave their audience plenty to admire over the hour-and-a-half-long show.

With a huge, sold-out crowd packed into the Saddle West Showroom on Saturday, Dec. 8, the 28th Annual Christmas Benefit Show was able to bring in a total of $4,400. The proceeds were earmarked to be split between two valuable community programs, the Pahrump Senior Center’s Meals on Wheels program and the Veterans of Foreign Wars Post #10054 veterans’ food pantry.

Nevada Silver Tappers founder B.J. Hetrick-Irwin said she was delighted to have the opportunity to assist such wonderful local organizations and declared the event to be a resounding success.

Master of Ceremonies for this year’s benefit was Debbie Walsh, who welcomed patrons before Pete Gaszy gave the invocation. Taking to the stage that afternoon was a wide array of acts, including the ladies of the Nevada Silver Tappers and that organization’s sister group, Ms. Senior Golden Years USA.

2018 Ms. Senior Golden Years Queen Teri Rogers had the honor of starting the show off with the lighting of the Christmas tree and the performances that followed swept the audience into a wonderland of music, lyrics and dance routines.

One of the aspects of the evening that Hetrick-Irwin was most enthusiastic about was the youngsters that were taking part in the show for the very first time. Always in search of new talent to entertain the masses that regularly attend the Christmas Benefit Show, Hetrick-Irwin said she was more than pleased to have the budding performers from Donna’s Dance Studio and the Nevada Dance Centre taking the spotlight.

Three young ladies from the Nevada Dance Centre dazzled the crowd with their own solo routines and it was clear each was already a highly-accomplished dancer with skills that can captivate almost any audience. Natalie Minor performed to “New York, New York” while Paris Gerlach selected “Je Suis Malade” and her sister danced to “Ain’t Misbehavin’.”

They held the rapt attention of attendees as they agilely leapt through the air, swirled and spun across the stage, their movements lithe and graceful and their faces suffused with joy.

Other performers included newly elected Pahrump Justice of the Peace Lisa Chamlee, another first-timer at the Christmas Benefit Show, as well as returning talents Bill Watson and Johnny V. Linda Groover and her ventriloquist doll named Angel as well as Autum Casterline added to the variety and special recognition was given to MaRia Apodaca-Shady and Kim Cornell-Lyle for their choreography of two of the Nevada Silver Tappers’ performances that evening.

“I am extremely proud of all of the acts that came to perform for us and of course, I cannot thank my girls with the Silver Tappers and the Ms. Senior Golden Years enough. They are always so wonderful and they did such a fantastic job,” Hetrick-Irwin enthused after all was said and done. “Thank you to everyone who made this such a wonderful success, we couldn’t do this without all of you!”

For more information on the Nevada Silver Tappers email slvrtpr@gmail.com or call 775-727-7011.