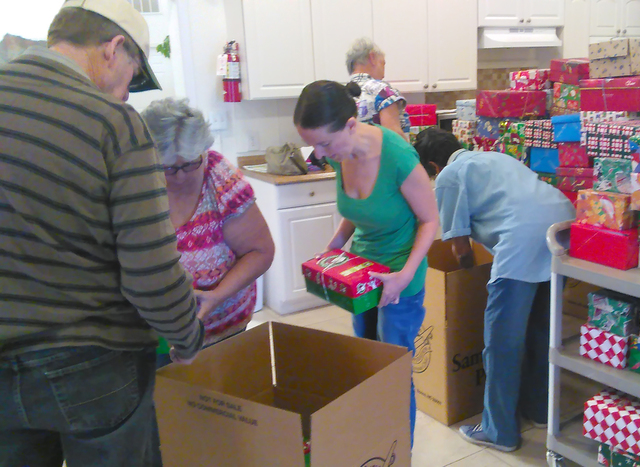 Trinity Assembly of God church volunteers began packing hundreds of shoe boxes filled with supplies for poverty-stricken children around the world. More than a half dozen churches in Pahrump are participating in the program dubbed Operation Christmas Child. The deadline for receiving supplies for the program is Nov. 19. Selwyn Harris/Pahrump Valley

An effort to make a difference in a child’s life this Christmas is underway in the community.

Operation Christmas Child is a program dedicated to providing much-needed provisions to children in third-world countries.

Michele Grabley from Trinity Assembly of God Church is organizing the Pahrump effort.

Grabely’s church is one of eight local churches participating in Operation Christmas Child, where the items and supplies are packed in shoe boxes and shipped to children in need around the world.

Operation Christmas Child and the nondenominational organization Samaritan’s Purse provide spiritual and physical aid to people around the world.

According to its website, since 1970, Samaritan’s Purse has helped meet the needs of people who are victims of war, poverty, natural disasters, disease and famine.

Their purpose, Grabely said, is to share God’s love and promote the Gospel of the Lord Jesus Christ.

The drop-off deadline for supply donations this year is Nov. 19.

“People can either wrap the shoe boxes with Christmas paper and people can fill them with school supplies, hygiene products or even little toys,” she said. “My church, Trinity Assembly of God is the relay center for the Pahrump community.”

Once the supplies and products are donated, church members, Grabely said, hold what’s known as ‘packaging parties’ to stock the shoe boxes.

From there, the boxes go to California, where they will then be shipped out to different countries around the world.

“There’re approximately 150 countries that we ship to,” she said. “The shoe boxes also make their way into parts of the United States for many Native American reservations. In 2015, on the west coast, approximately 608,000 boxes were packed and shipped.”

“Whatever donations people can provide we will gladly accept, including cash,” she said. “Aside from the school and hygiene supplies, people can also send a little toy if they wish, as long as it fits inside the shoe box.”

Additionally, Grabely noted the importance of the boxes to children around the world.

“For some of these children, the boxes are the only thing they will get for the entire year so it’s very important to them,” she said. “Last year and again this year they are going to some of the refugee camps over in the Middle East. A lot of those children have been displaced so often that it’s tragic.”

Regarding the Samaritans Purse organization, Grabely said the group regularly participates in other relief efforts, both home and abroad.

“It’s just amazing what this organization does,” she said. “They do disaster relief and were probably one of the first agencies who flew down to Florida and Texas when there was severe flooding in those states. They provide all kinds of supplies in the event of a disaster.”

Additionally, Grabely said several other churches in town have agreed to enlist their respective services for the effort, including Amargosa Valley.

She noted additional assistance would be appreciated.

“All are welcome to participate in packing the shoe boxes, including people whose church may not be participating in the program, but would be interested in packing a box for a child,” she said. “Anyone who is interested and would like more information on the program can contact Trinity Assembly of God Church at 775 727-4514. We are located at 750 Big Five Road.”

In 2015 the U.S. packed and shipped a total of 8.7 million shoe boxes, with an international participation of roughly 11.2 million.