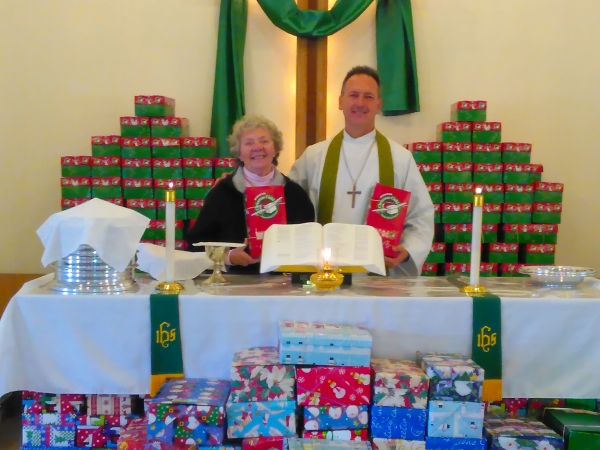 With just over a month until Christmas, several local churches have come together providing the gift of hope to the planet’s less fortunate populations.

Operation Christmas Child is a project of the Christian relief organization known as Samaritan’s Purse.

For more than 20 years the organization has collected gift-filled shoe boxes and delivered them to children around the world living in desperate poverty.

On Thursday, members from Pahrump’s Saved by Grace Lutheran Church took a break from packing and stacking boxes to talk about the project, which began in 1993 by Franklin Graham, the eldest son of Evangelist Billy and Ruth Bell Graham, who serves as president and CEO of Samaritan’s Purse.

The shoeboxes are collected in the United States, Australia and New Zealand, as well as parts of Europe and Asia.

Member Karen Frost said the boxes are delivered to young children in third-world countries, many of whom have never received a Christmas gift before in their life.

“The boxes are filled with toiletries, clothes and sometimes toys, like a stuffed animal if we possibly can,” she said. “I put the word out to everyone I know and I have received packages from all over the country as well as of course, right here in Pahrump.”

Frost and roughly 15 church volunteers worked 30 hours a week at times decorating and filling the shoe boxes throughout the year.

The group even creates some of the gender-specific items by hand.

“We’ve been working on this all year long,” Frost said. “For the girls, we make the dresses and there’s a little bag with a drawstring along with socks, undies and a stuffed animal. We also added some plastic silverware, crayons and a notepad along with a washcloth and soap. For the boys, they get a T-shirt and shorts that we made and of course, the little bag to put it in, along with socks, a washcloth and plastic silverware.”

Saved by Grace Lutheran Church Pastor John A. Biggs noted the importance of letting the children know the true purpose of the Christmas gifts.

“The boxes are presented by missionaries who not only give the children the gifts, but also they explain the reason for the season as well,” he said. “I would imagine some countries that are closed to Christian missions might not be willing to have operations visiting their nation.”

Additionally, each box according to Frost, is carefully examined prior to being shipped off

“From here the boxes go to California and every box is inspected to make sure they don’t have any chocolate, liquids or anything breakable or war-related,” she said. “It is all thoroughly checked out ahead of time, and the boxes will go to villages and every child in that village will receive a box.”

Last year, the church assembled roughly 275 boxes that were shipped off.

This year, Frost said more than 444 boxes will go out.

“We can only hope that we can increase that number next year because you never know who is going to step up and help,” she said. “Many of my friends are at Preferred RV and are the snowbirds who come and go, but when they are here, they are all sewing. When they move on, another group comes in.”

Frost did note one slight disappointment regarding the program.

“We don’t get to see what kind of reaction the kids have when they receive their boxes,” she lamented. “We would love to be a fly on the wall but it’s not going to happen I’m afraid. We just hope and pray that the children are happy and it’s well received. They get a booklet with each shoe box in their native language and it tells the story of the shoe boxes.”

Frost said the collection point for Pahrump is Trinity Assembly of God Church on Big 5 Road.

This week, the boxes are being loaded and are expected to go out early next week.

“We will be shipping these out to Las Vegas by the 23rd or 24th of November,” she said. “When they leave Vegas, they bring semi trucks and all of that is donated. The CDL drivers come from Southern California to pick up the shoe boxes. Then they go to the warehouse where they are all inspected to make sure everything is OK.”

With a congregation of just over 100, Saved by Grace Lutheran Church has been in existence since 2001.

Pastor Biggs said he joined the ministry more than two years ago.

“We have youth programs as well as the Stephen Ministry, which is a visitation ministry where lay people in the church are equipped to listen and offer advice and walk alongside people as they go through difficult times of transition, whether it’s a financial problem or loss in the family. It’s an intentional care ministry. We also have a choir, bible studies and prayer groups. Most importantly, all are welcome,” Biggs said.

On Dec. 6, the church will hold a Christmas service at the Artesia Clubhouse on the south end of town.

Saved by Grace Lutheran Church is located at 6341 Hawkins Way.