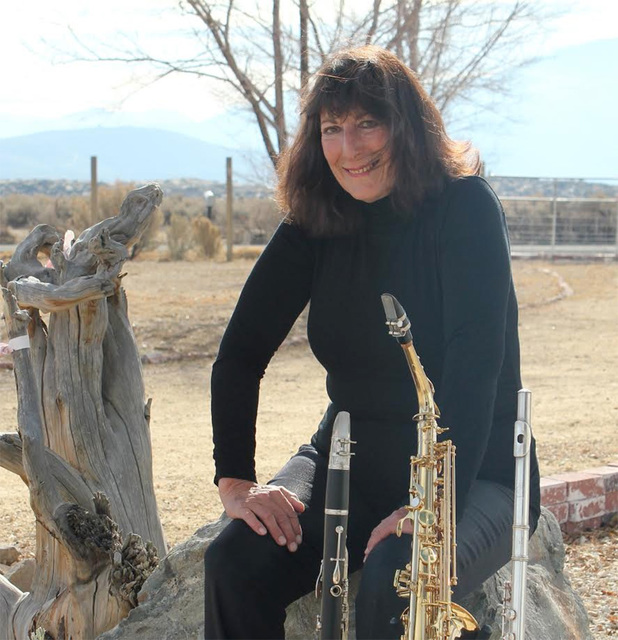 Classically trained musician Patty Vinikow is part of a quintet formed earlier this year. The Pahrump resident and her fellow musicians of the Minuetto Music Chamber Players will play their first public performance today at the Pahrump Community Library, 701 East St., beginning at noon. Admission is free. Special to the Pahrump Valley Times

They are a new group comprised of five classically trained musicians armed with a passion for playing.

The Minuetto Music Chamber Players are set to perform a special Christmas concert today at the Pahrump Community Library beginning at noon.

The quintet consists of Patty Henderson on violin, Barbara Edwards on viola, Ruth Hogan on cello along with George Roberts and Patty Vinikow playing the flute and clarinet respectively.

The group is already planning a spring concert early next year.

“We are a new group and this is our gift to the community and we are putting together a Christmas concert sprinkled with classicals,” she said. “It’s going to be a short program lasting about 45 minutes or so and we will feature Christmas favorites and lovely classical music.”

For a band of relative strangers from different walks of life when they formed in the spring, Vinikow said the group has truly progressed in terms creating and performing musical classics.

She noted that George Roberts put an ad in the newspaper requesting musicians several months ago.

One by one, each musician answered the ad

The group has been in rehearsals for roughly four months.

“We have really been working hard and we sounded so good at the initial practices that we decided that we could hit the road and give something back to the community and that’s what the free library concert will be all about. Most of us are at the good amateur or professional level because we make our living through music. Some of us are retired.”

In her own leisure time, Vinikow, a musician since the age of 9, said she also enjoys playing at different venues around town.

“I have fun sitting at the Hubb Saloon and places like that where they have rock and roll bands,” she said. “I have also played all over the world. I play the flute, clarinet and saxophone, but for the library concert, I’ll just be playing the clarinet. It’s all about lovely people and good music what could be better?

Vinikow also said the group is open to performing at various parties and functions in the community.

“We will perform for private parties, weddings, or any type of setting,” she said. “Right now we are just introducing ourselves to the public and we are excited about the concert at the library and we hope we get a good turnout. The only time slot we could get was noon time, so hopefully it will give people an opportunity to come out during their lunch hour if they want to come and see us.”

Additionally, Vinikow said the group is open to other musicians coming into the fold.

At present, rehearsals are once a week.

“We are also looking for additional musicians who can play, because we can always find a place for them in our lineup,” she said. “It doesn’t have to be a traditional violin; it could be a trumpet or French horn or even an accordion.”

Vinikow moved to Pahrump from the Reno area last December after a brief visit. She has since purchased a home and settled down in town.

For additional information on the booking or performing with the Minuetto Music Chamber Players, call Vinikow at 775-727-7338.