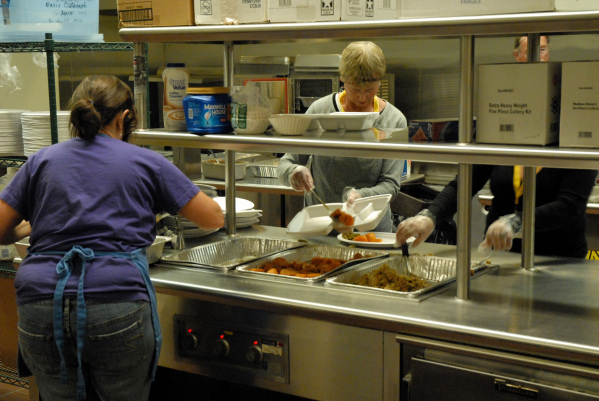 Volunteer Coordinator Linda Wright said the coalition is prepared to provide at least 1,000 meals from noon until 3 p.m. on Thanksgiving Day.

Wright also said provisions were made for those who are handicapped and homebound, courtesy of the Pahrump Senior Center.

Anne Harris, site manager for the senior center, said attending Thursday’s community dinner is as easy as making a phone call and providing a name, phone number, address and the number of those needing the ride to the coalition.

“To ensure a ride, we will need them to call by Wednesday, Nov. 25th, from 9 a.m. to 3 p.m,” she said. “To make reservations, please call Anne Harris at (775) 727-5008, extension 10, and leave a message with the information. We will promptly get back to them to confirm the reservation and we all wish everyone a safe and happy Thanksgiving Day.”

As in years past, the task force did not scrimp when planning for the community dinner, as the meal includes turkey, stuffing and all of the ‘fixins.’

Wright noted the event would be nearly impossible to pull off without the help of area volunteers.

“They are very, very important and very crucial because they are who help us put this on and without them we would not be able to do it,” she said. “We are able to do this with the generosity of those who come out and donate their time as well as many donations from around the community.”

For those who prefer to enjoy their meal at home, Wright said, the task force can also accommodate.

“If a family or individual would like to have their meal delivered to their home, they can call Linda DeMeo at (775) 209-4683,” she said. “Linda will take the delivery calls up until noon on Thanksgiving Day. We are still looking for delivery drivers to deliver the dinners to homebound people. We also need servers for dinners and drinks at the coalition as well as some security volunteers.”

Wright noted the task force has provided the community dinner for more than a decade.

She said without it, many in the community would go without a genuine Thanksgiving dinner.

“If we didn’t put this on there would be many families and individuals who would go without a Thanksgiving dinner,” she said. “A lot of people don’t have families because they are living all by themselves. This gives them an opportunity to come out and socialize with other people and just feel like they are part of a family. We will also have coats to give away because it’s starting to get very cold. We will also have someone there to talk about services in the area for those who need help.”

“If anyone wants to make a monetary donation, they can do so at the NyE Communities Coalition on 1020 East Wilson Road,” she said. “If they make a donation by check, they should put in the memo area ‘holiday meals’.”