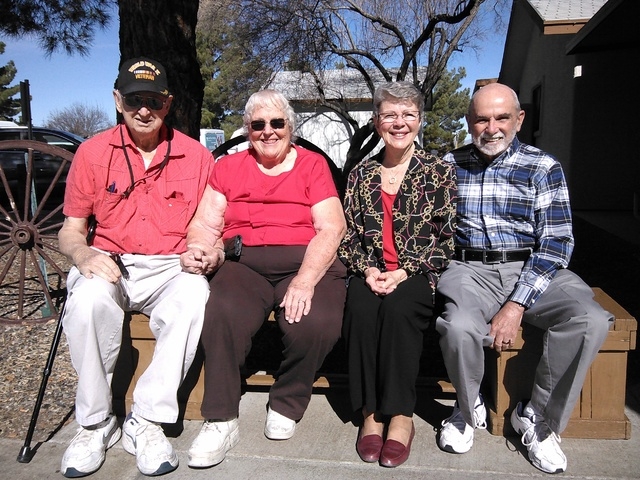 Perhaps they are not among the longest married couples in Pahrump, but Fred and Carol Slaughter, along with Ruth and Richard Uncapher shared their respective stories of married life over the past half century on the week of Valentine’s Day.

The Uncapher’s story began in Las Vegas where they were married at the Little White Wedding Chapel nearly 58 years ago. The couple first met in Van Nuys, Calif., at a skating rink where Richard worked.

He was 30 at the time, while Ruth was just 19. He noted there was nothing fancy about his marriage proposal.

“I think we had gone out for pizza,” he said. “We had been going together and dating for a while. I don’t think I actually popped the question because I just suggested it may be time for us to get married. We had been together for quite a while and she said yes.”

At the time, a few family members and friends actually told the couple the chance of a lasting relationship were little to none.

“We met in November 1955, and we married the following October in 1956 on Oct. 20,” Ruth recalled. “He was 12 years older than me and everybody said it would never last because we were going to Sin City.”

Ruth also said there is no real secret to staying happily married for more than 50 years.

“I think communication is important and not going to bed at night angry at each other,” she said. “Talking about things and not jumping to conclusions are also important. Work your problems out and don’t just get up and leave.”

“I had a jeweler friend who made a heart pendant for her,” he said. “The best decision I made in my life was marrying her.”

Though the couple are always together, there was a time during their marriage when they were forced to live apart for an extended period of time several decades ago.

Richard said they had purchased a new business at the time.

Over the years, the Uncaphers were foster parents to 12 children for roughly eight years.

They plan to spend a quiet Valentine’s Day at home tomorrow.

Carol Slaughter was 18 years old when husband Fred, 23, at the time, popped the question on Saturday, October 17, 1960 in Baltimore.

The young couple had known each other for roughly four years before they decided to “tie the knot.”

“We met at church and I just thought he was the greatest thing in the world,” Carol gushed. “I was about 14 years old when we started going together and about three years later we got married. I remember I was at a wedding with my mother and I told her I want a wedding like this, and she said I had to give her three years’ notice. I said you have it and we had a big wedding.”

Fred, meanwhile, recalled the time when he proposed to Carol.

It was after they left the movie theater one evening when he popped the question.

“As we came out the theater and were walking to the car, we were holding hands,” he said. “I just got this feeling I was floating on a cloud and it was a very emotional thing with me. We got in the car I turned to her and said Carol, will you marry me?”

Once married, the couple had to endure being separated from one another for a few weeks when they were preparing to move from Baltimore to Ocean City, Maryland.

“I had a job waiting for me in Ocean City and I had to go ahead of him,” she said. “He still had work to do in Baltimore. It was about three weeks at the most.”

Carol noted that along with communication, there is another aspect that is key to an enduring marriage – at least for her.

“Separate checking accounts,” she said with a laugh. “That started many years ago while I was working as an Avon representative and we kept our money separate and I had my own checking account. Like Ruth said, it’s also communication and you have to have a lot of patience,” she said. “I think I have more patience.”

Additionally, Fred noted there were a few times over the years when the couple didn’t always see eye to eye on certain family matters after they had kids.

“The roughest years were when we were raising the children,” he said. “We would have a clash now and then over how to correct their behavior. I was the disciplinarian, but we worked things out and it was fine.”

The couple moved to southern Nevada in 2001.

The Slaughters have three children, four granddaughters and five, great-grandchildren

Both couples still exchange Valentine’s Day cards to this day.