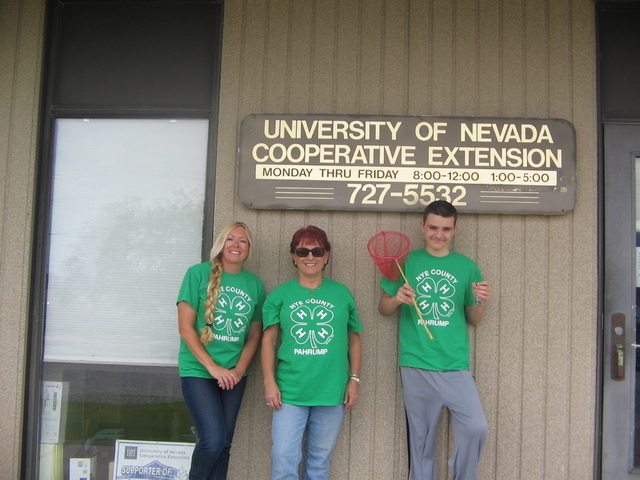 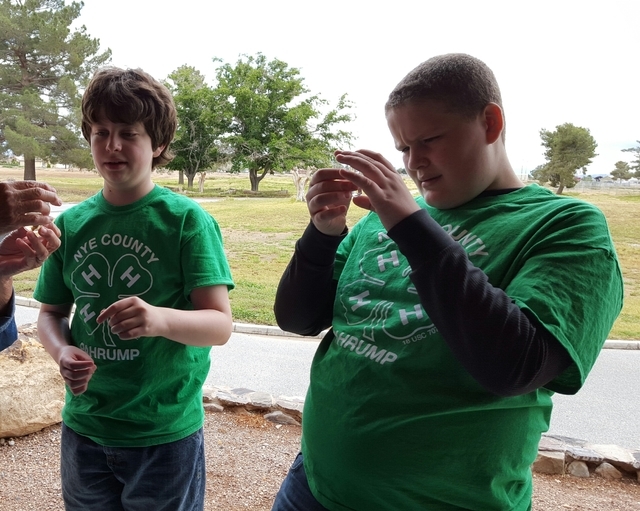 “Insects” is the buzz word at the Southern Nye County 4-H Office in Pahrump.

The 4-H Club, under the direction of new coordinator Lisa Hasse, recently formed a bug club and area youth are encouraged to join.

Master Gardener Ellen Arntz is the volunteer leader of the new club and Hasse is the assistant. Both leaders share the goal of interesting kids in the study of insects, or entomology.

“It teaches them, well, a skill – entomology, and it’s fun, at least I think so,” said Hasse, adding that she loved bugs as a kid.

During one meeting, Hasse included a lesson about the recent chinch bug (also spelled cinch bug) invasion in the valley. A future meeting will include a session on which insects are beneficial to plants and the environment and which bugs to avoid or step around.

Arntz is hoping now that school is out, more parents will want to bring their children or grandchildren to the club for something that is educational and will keep them occupied for an hour.

Twelve-year-old Landon Ingersoll is a member of the bug club and has always been interested in insects since he was four or five years old, especially in the desert where the ground appears lifeless.

“But, you get down on your knees and you look and there’s all sorts of life everywhere,” he said. “And there’s like centipedes, and weevils, and flies and all sorts of different, little tiny creatures with their own little ecosystem.”

His favorite insects are dragonflies since they are colorful and harmless.

“They don’t sting, they don’t bite, they just kind of fly around and mind their own business,” he added.

Ingersoll said he is learning about bugs from the club since he is home-schooled, but overall is studying animals in biology.

“It’s only an insect if it has six legs, so spiders are not ‘cause they have eight legs,” he said. “They’re technically their own group; they’re arachnids. Or a centipede isn’t ‘cause it has about, you know, a lot of legs, not six, way more than six,” he laughed.

He is not sure if he wants to pursue the study of insects and become an entomologist since he is still considering career options at this point.

“Landon is interested in biology as a whole and I think it’s great if you can know what’s happening in the world around you,” said his mother, Stormy Ingersoll. “Like he said, you don’t really know all that’s going on until you really kind of get down and look at it.”

He also participates in the archery and community clubs sponsored by the 4-H Club.

“4-H, it’s amazing the opportunities that 4-H presents for kids in our community,” Stormy Ingersoll stated. “And it’s also a really great opportunity as homeschoolers to be part of our society and clubs and also to learn about specific topics that maybe, you know, I don’t have the knowledge in. It’s a great resource.”

“I really think that 4-H should continue to be around because it gives me and many other children so many great opportunities to go out catch some bugs, or shoot a bow and arrow and be part of the community and have some fun, you know,” Landon Ingersoll added.

Billy Lauder has found bugs “fascinating” ever since he was four years old, especially praying mantises. His family fondly called him the “mantis whisperer” since he would walk around with the species on his shoulder talking and interacting with them.

“I’m am really good at handling praying mantises,” Lauder said. “They are very much my favorite bug.”

Lauder can describe in complete detail the full life cycle of a praying mantis.

He admits that wasps are his least favorite insect.

Even though he’s only 12, Lauder knows he wants to continue his study of insects and become an entomologist.

Lauder doesn’t have a personal collection of insects, he uses the catch and release option.

“I prefer to just like pick one up, examine it for a while and just let it go,” he said.

“Sometimes kids with these interests are looked upon by other kids as being nerds,” Arntz said. “This group offers these kids a chance to make other friendships with kids that have very similar interests. So, it’s really a good opportunity for these kids to get together and feel like, you know, ‘I’m not just one of a kind that’s different than anybody else. There’s other kids out there that have the same interest as I do and there’s nothing wrong with that.’”

The only fee to join 4-H is $1 a year for insurance coverage, according to Hasse. A child does not have to be a 4-H member to come to a bug club meeting.

“You can come as a guest, at least to try it out,” Hasse stated.

She explained the bug club is meant to be an ongoing 4-H project in addition to archery, livestock, sewing and other offerings available to youth through the organization.

No materials are needed by the kids. The club supplies a series of workbooks entitled “Teaming With Insects,” which are part of the national 4-H curriculum, the catching nets and even the bugs.

“I love to work with children and I love to see them get excited about something other than a cell phone or a video game or anything electronic,” Arntz added. “And it’s nice to be outside and just communicate with the kids and nature and have a good learning experience.”

The 4-H bug club meets the third Monday every month from 4-5 p.m. in the annex building on the grounds of the University of Nevada Cooperative Extension office, 1651 E. Calvada Blvd. Newcomers are urged to call 775-727-5532 prior to the meeting, but walk-ins are welcome.