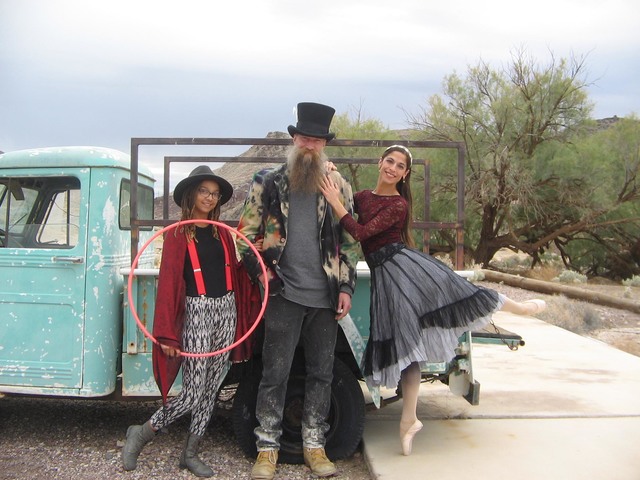 Kayla Thomas, Jim Furlough, and ballet dancer Jenna McClintock are some of the performers in "Teatro El Grande: Tecopa’s Circus of Fine Art" debuting later this month on the grounds of Tecopa Hot Springs Resort, 860 Tecopa Hot Springs Road, Tecopa, California. There will be weekend performances Feb 11-12, and Feb. 18-19. During the week of Feb. 13-17, there will be morning ballet, yoga and music classes. Brenda M. Klinger/Special to the Pahrump Valley Times

A circus of sorts is coming to the desert town of Tecopa.

“Teatro el Grande: Tecopa’s Circus of Fine Art” is making its debut later this month in a huge white tent, complete with a stage.

The event runs Feb. 11-19 on the grounds of the Tecopa Hot Springs Resort.

The brainchild of well-known area ballet dancer Jenna McClintock, who turned an invitation by the Sierra Club to dance at its annual Desert Committee meeting in Shoshone into a public week-long festival featuring classical ballet, hoop dancing, mime, poetry, live music and a few surprises.

McClintock, who performed at the Amargosa Opera House, stressed that the event is not about her being the star of the show.

“This is our first step in creating a community performing arts center for Tecopa and Shoshone; for us, this is our show,” said McClintock, who has embraced her new role as creator, director and host performer.

Teatro El Grande, which means big theater, is a bit ironic, in the literal sense.

“Because we all have this big heart toward this production, there’s a lot of heart,” McClintock said, even though the event is really small in scale.

Originally from the Bay Area of California, McClintock has performed all over the country, in Europe and South America.

She came to the desert and danced for two seasons until last May at the Amargosa Opera House, where her idol Marta Becket performed until 2012. Becket, who died earlier this week at age 92, was the first ballerina McClintock saw dance when she was 6 years old while visiting the opera house. She was hooked and begged her parents to put her in ballet.

McClintock, now 41, would like to have her own theater.

“I did a one-woman show at the Amargosa Opera House, but that’s not really what I am about,” she said. “I’m more into community and inspiring and enlightening our public. So, I’ve asked our local talent to come join me. I will be hosting the show and doing a number of different acts, mime and ballet.”

The show will be totally different from what the audience has seen at the Amargosa Opera House, since it will be all of McClintock’s creations. She hopes to stage it twice a year.

The local talent will include hoop dancing, fire dancing and musical performances on a steel drum by Jim Matson aka “TerraPan Jim,” and a musician on the electric bass guitar. Local poet Mark Haywood will also be part of the program.

Kayla Thomas, originally from Baltimore, will be the star hula-hoop performer.

“I just do it for fun, dance with it, do tricks, illusions,” Thomas said.

She has performed at the Renaissance Festival in Sunset Park in Las Vegas.

“I think it’s really awesome; she (Jenna) asked me to do it, and I thought it sounded like a great idea,” Thomas added. “There are not many things that go on out here, and it will be nice to bring more people in, maybe the next generation coming in.”

Jim Furlough, also formerly of Baltimore, is the stage manager and bass guitarist.

“I like the idea, and it’s extremely willful,” Furlough said. “No one’s ever done anything like that out here, so it strikes me as a good thing to do.”

A $10 donation is suggested with proceeds going to the theater.

Between the weekend performances, ballet, yoga, and music classes will be held Monday through Friday, Feb. 13- 17 at 10 a.m. Amateur night will Friday, Feb. 17 at 7 p.m.