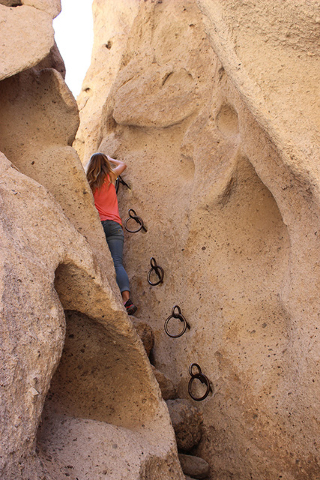 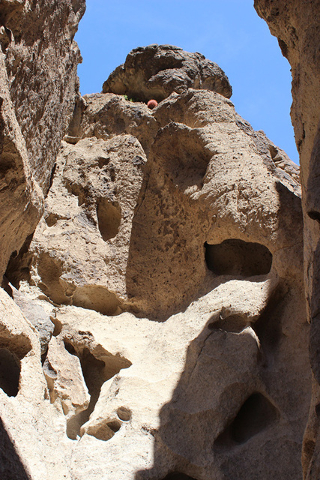 The Rings Trail, located in the Mojave National Preserve, is a fun and short hike that takes you down through Banshee Canyon, including a descent through a steep, tight slot. It’s not a hike you will soon forget because you will make your way through the steepest part of the canyon using metal rings and pins bolted into the rock.

Elevation at the trailhead near Hole-In-The-Wall visitor center is 4,265 feet, so temperatures could be around five-to-10 degrees cooler than in Pahrump.

From the parking area the official trail is an obvious one that begins just behind two interpretive signs. But before you even start on that route it is interesting to go left first and follow a short spur trail to a fenced overlook down into another canyon below. This is a hanging canyon — that is, a canyon whose mouth emerges on a cliff, so you can’t simply walk into it. Once you descend the Rings Trail you can head left and see the dry fall that formed at the little canyon’s mouth as water drained out over the centuries.

Returning to the official trail, just follow the path and in less than a minute Banshee Canyon starts its descent and narrows considerably. Head on down picking the easiest route around the rocks and small boulders. The canyon then takes a sharp left turn and you will be standing at the top of the initial drop-off and first set of ringbolts. Here there are four. The ring system was installed by the Bureau of Land Management about 35 years ago.

I estimate the first descent to be only about eight feet but it’s a tricky one to get started. The safest way to do this is to first turn around so you will be facing the wall as you go down. Position yourself so you can grab the first ring firmly with your hand and then drop one foot down until it is firmly placed on one of the bolts, then grab the next lower ring beneath and so on, repeating this ladder-like pattern as you climb down to terra firma.

After this there will be a very short section where you will be able to walk normally, and then you reach the second drop-off and another set of rings. This segment has six rings and is a longer drop, but the rings seem to be placed better so it will seem easier.

Since the rings were put in place with adults in mind, children will have to reach farther to grasp them, and the pins can be slippery to stand on. But with a strong adult below and another above to help, it’s safe enough for children, yet unusual enough they seem to particularly love this hike.

Once down at the bottom of the slot area, head out to where the canyon widens substantially. Banshee Canyon can be an eerie place, not only because of the unusual formations but the way it sounds when it’s windy. When the wind blows it often causes a peculiar sound suggesting the mourning call of the banshee in Irish legends.

This area was formed about 18 million years ago when massive volcanic eruptions occurred here. Gas was trapped in the ash and formed the thousands of holes, windows and odd shapes. Over time, rain and wind have enlarged these holes. Fossils from plants and animals can sometimes be found in the rock.

As for the hanging canyon I mentioned earlier, once you head out of the slot area head to the left and you will find the dry fall. It is perhaps 20 feet high with small hand and foot holds that have been chipped into the rock. In the Southwest these are often referred to as Moqui steps. Years ago there used to be a climber’s rope here and people would head up using the steps and rope together. The rope is no longer there and I advise against attempting this climb.

For this hike I would strongly recommend wearing canvas, heavy denim or other rugged pants. The slot is very narrow, so rubbing against the rock wall is unavoidable, and the rock can easily tear lightweight fabrics.

Hole-in-the-Wall was named by a gunfighter and cattleman named Bob Hollimon who thought the canyon reminded him of a Wyoming place of the same name, infamous as a refuge for outlaws.

After exploring, return back the way you came. The climb is a lot easier going up.