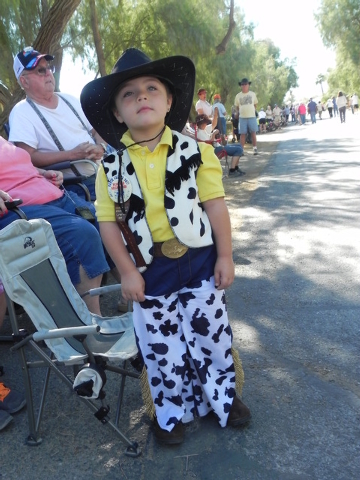 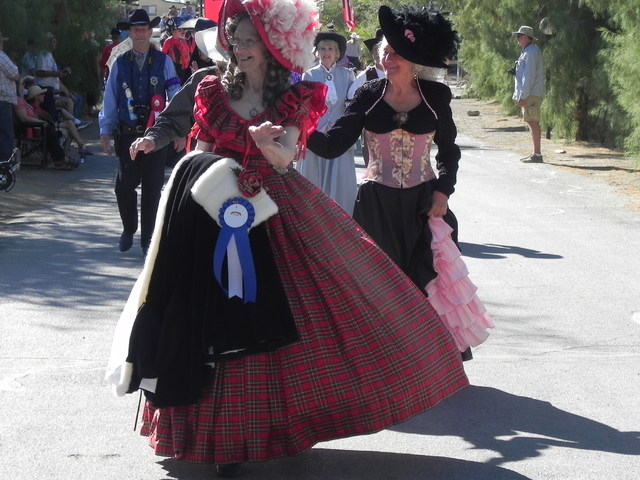 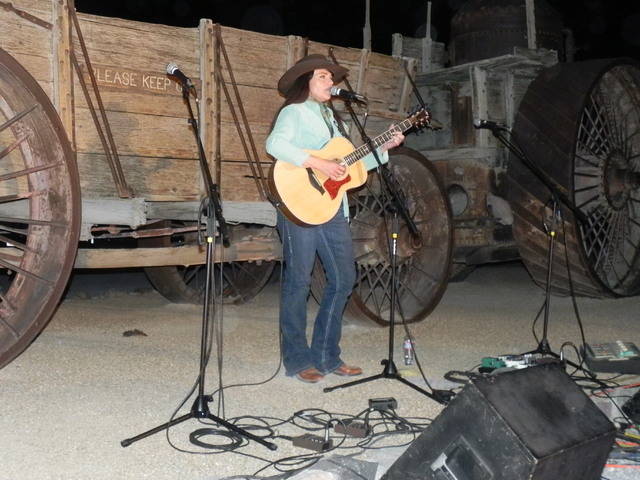 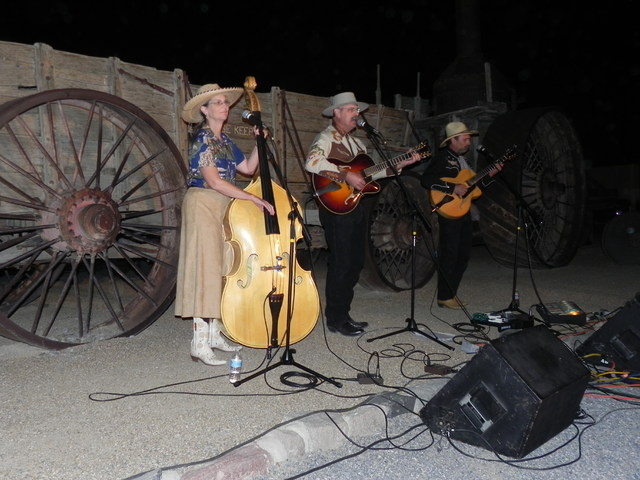 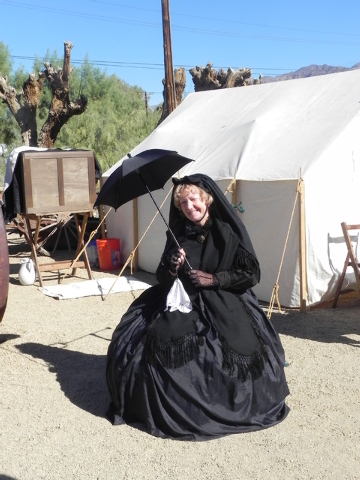 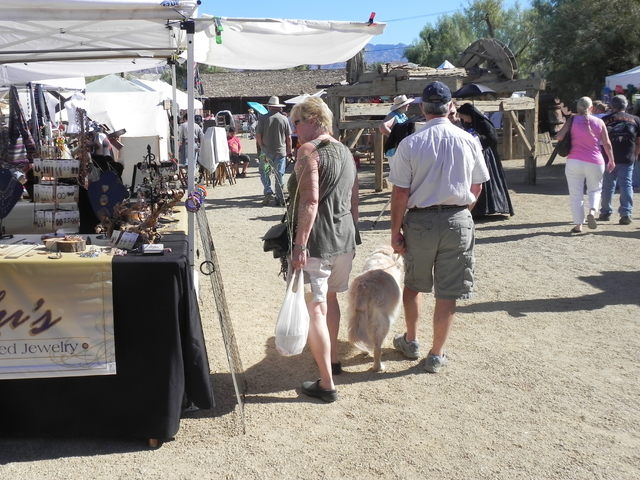 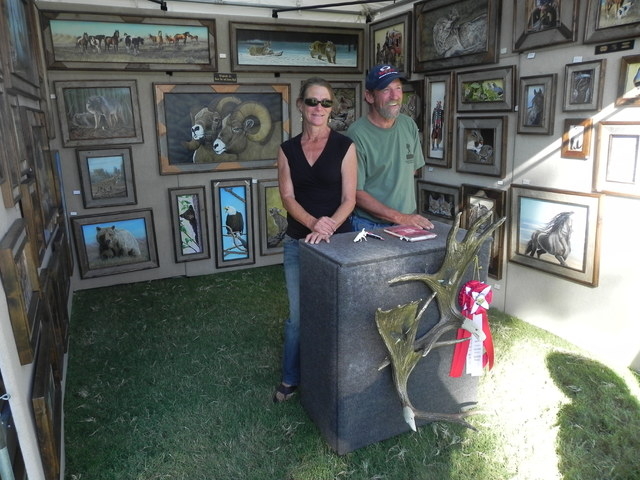 British tourists Gerry and Rose Williams were part of a crowd watching the annual parade of colorful western characters marching through the date palm grove for the annual 49ers Encampment at Furnace Creek last weekend.

“We chanced on it. We came to Death Valley about five years ago and it just happened to be the weekend of the 49ers,” Rose Williams said. “So we promised ourselves we’d come back for a full brush.”

European tourists are fond of the lore of the old West, probably the result of all those western movies and they weren’t disappointed last weekend. While contestants wore 19th century period costume in the parade, fiddlers competed on a stage nearby. At night, classical western stars played tunes like “South of the Border” and “I’m So Lonesome I Could Die” around a campfire in front of the Furnace Creek Resort.

“I just love it and the valley just blows you away,” Rose Williams said. “We came specifically for this. It’s just amazing.”

Gerry Williams said he likes the friendliness of the people west of the Mississippi River.

“The actual 49ers I think it’s wonderful and all it stands for and there’s just so much going on,” Rose Williams said.

Artists showed their work behind the old Borax Museum. Steven and Karen Boyd, with a studio called Art on the Wild Side, won first place for acrylic and oil painting respectively in the 49ers Invitational Western Art Show.

A quartet with stand-up bass, fiddle and guitars called “Senior Moments” was playing a tune called “Sunrise on the Old Guinea Farm” at the fiddlers’ stage.

Bill Whitfield, a member of the Death Valley 49ers who was in charge of the contest, said they follow strict guidelines of the National Fiddle Association. He said the Old Time Fiddlers contest was one of the more popular events at the 49ers encampment according to surveys.

“We had about four national champions this past week,” Whitfield said.

At night, Mary Kaye strummed a guitar with some originals and some classic western tunes. She will be honored as western music entertainer of the year in Albuquerque, N.M. this month.

New acts this year were the Old West Trio from Georgetown, Calif. and the Western Music Association’s male cowboy poet of the year in 2006 and 2013 Andy Nelson, who tossed up humorous tales of life on the ranch. Western music artist Belinda Gail provided entertainment at the parade and at the campfire.

Bill Geist, a member of the Death Valley 49ers, a group dedicated to the preservation of the history of Death Valley, said, “you’ve got to be impressed with how to set up an encampment in a desolate area.”

But attendance was down this year, according to festival promoters delivering reports at the annual 49ers meeting in the El Marquez Room at the Furnace Creek Inn Sunday. Many of the 49ers wore cowboy gear for the meeting, some had the Smoky the Bear hats typical of park rangers.

A prospector’s race and wheelbarrow race was almost canceled. But 55 people took part in the gold panning competition, according to 49er Ted Tatro, Contestant Kay McDonnell of Pahrump scooped up eight gold nuggets and had a clean pan of any sand, a requirement of the competition.

A 49er in charge of the art show, Marty McGrath, wished the results were better for the 23 artists who signed up, including six new artists. Four of the new artists didn’t sell enough to come back, she said.

“There were 18 total sales this year which was really low. The crowd was low and they didn’t bring a lot of money,” McGrath said.

One of the speakers scheduled to make presentations at the Furnace Creek Visitors Center was the great-granddaughter of Death Valley Scotty, though she didn’t really know the man. Historican and author Stanley Paher, who wrote the definitive book on Nevada ghost towns and mining camps, gave talks.

Robert Whipple, outgoing president of the Death Valley 49ers, said seven people from Germany plan on coming back for the encampment, after enjoying the entertainment and the arts and crafts.

“Our average age is on the upper side, so a lot of you volunteers are dropping off. They can’t keep doing what they’ve done in the past,” Harders said.

Last year was a tough year after the federal sequestration shut down federal facilities, he said.

The encampment is typically held on the first full weekend of November.