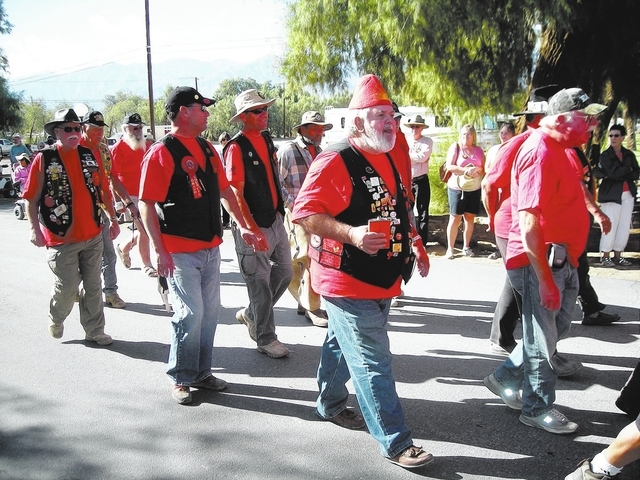 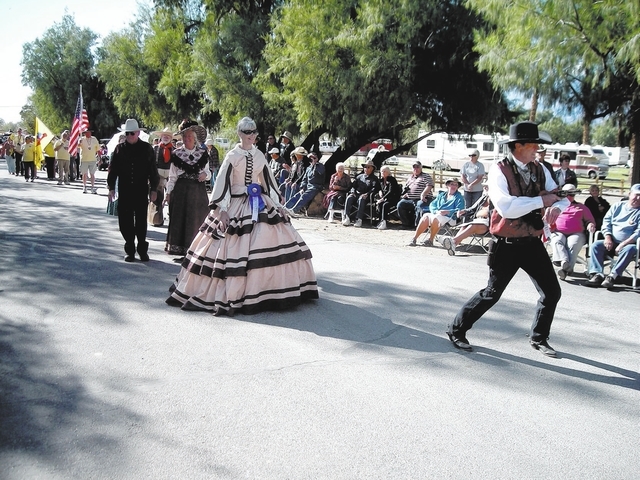 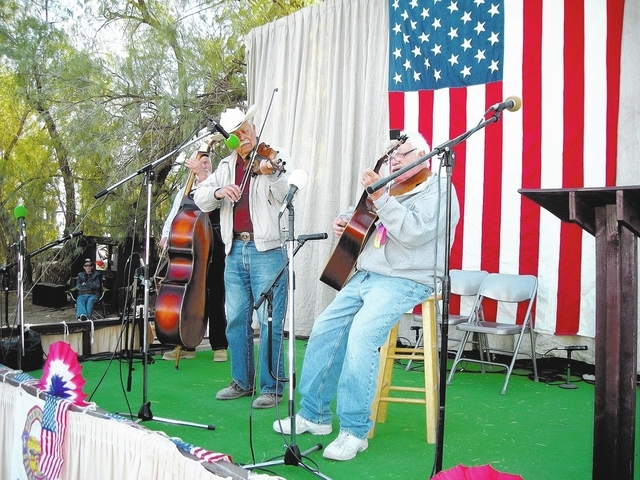 FURNACE CREEK, Calif. — The cooler months are the best time to visit Death Valley National Park and the week of the 64th annual 49ers Encampment, which lasts Wednesday through Saturday, is a prime opportunity to learn about the history of the largest national park in the lower 48 states or just enjoy the artistic entertainment.

The Uplands, Calif. trio “Chaparral,” a popular favoite during the 7 p.m. Saturday night performance around the Ol’ Dinah Campfire, is being replaced this year by The Old West Trio. Lead guitarist Steve Johnson, rhythm guitarist Steve Ide and upright bassist Leslie Ide form the group, which won the Will Rogers Award for 2011 Best Western Music Duo/Group of the Year. The Old West Trio plays spot-on renditions of some of the greatest western tunes, either silver screen harmonies or newly-minted cowboy classics.

At 6 p.m. on Friday night, master of ceremonies Richard Elloyan, Sour Dough Slim aka “the Yodeling Cowboy” and Mary Kaye will take the stage at the Ol’ Dinah Campfire. Mary Kaye won Western Music Association Female Singer of the Year and has performed at the Amargosa Opera House.

But it’s common to find musicians informally entertaining with guitars, banjos and fiddles around the Furnace Creek grounds during the event.

The Southwest Mining, Minerals, Lapidary and Craft Show takes place behind the Borax Museum daily from 9 a.m. to 4 p.m. throughout the event. Golf tournaments are scheduled at 8 a.m. Thursday, Friday and Saturday at the Furnace Creek course.

A 49er hike is scheduled beginning from the Death Valley Visitor Center at 9 a.m. Wednesday. Chuck Knight will be the guide to interesting locations like Lemoigne’s grave, Manley’s bar, the Hole-in-the-Rock Spring and others. By popular request, Knight will lead a four-by-four tour up Cottonwood Canyon, one of the unique desert canyons from 9 a.m. to 1:30 p.m. Thursday, participants must have an all-terrain vehicle.

A tour of the historic Furnace Creek Inn is scheduled at 10 a.m. and 1 p.m. Wednesday. The Inn opened Feb. 1, 1927. It expanded in 1929 and 1937. Famous guests have included Clark Gable, Anthony Quinn, Ronald Reagan, Marlon Brando and Martin Sheen.

The pampered pet parade is scheduled at 9:15 a.m. on the lawn south of the swimming pool.

Award winning guest author Nicholas Clapp will discuss his book “Gold and Silver in the Mojave” at 1 p.m. Wednesday in the Death Valley National Park Visitors Center Auditorium. Clapp produced and directed the film, “The Great Mojave Desert” for CBS and National Geographic.

The Western Art Show kicks off from 9 a.m. to 4:30 p.m. Thursday, one of the longest-running art shows in the West, held annually since 1951. Premier artists from nine western states will display and sell their works on the lawn south of the swimming pool. Prospective artists are welcome to add a few strokes of art to a piece begun by Rich Pelletreau that will be auctioned off at the artists breakfast Saturday morning. A quick draw, a painting started and ended in 45 minutes, takes place at 2 p.m. with entertainment by Sour Dough Slim.

The annual pioneer costume contests get underway at 11 a.m. Thursday. Costumes will be judged on authenticity, workmanship and overall effect. Mary Kaye will provide entertainment.

Author Daniel Arnold will present a program on his book “Salt to the Summit,” the story of his trek from Badwater to Mount Whitney, at 11 a.m. Thursday in the visitors center auditorium.

The Coyote Howl, an informal talent night filled with laughs and music, will take to the fiddler’s stage at 6 p.m. Thursday.

Musicians will serenade diners at the 8 a.m. Hootenanny Breakfast at the fiddlers stage.

Visitors can try their hand at gold panning on the lawn by the tennis courts at 9 a.m. Thursday and Friday, followed by a gold panning championship Saturday.

Historian Stanley Paher, who authored 19 books on western history, will present an illustrated talk on Goldfield, Gold Hill and ghost towns from 10:30 a.m. to noon Friday at the visitors center auditorium.

Unfortunately, due to the washout on the West Valley Road, a mule train and group of trail riders from Ridgecrest, Calif. won’t make the trip this year. Norm Noftsier, leader of the mule train that left Pahrump, is only scheduled to travel as far as Old West Days in Shoshone, Calif. this year. Ordinarily the wagons arrived Friday morning.

Steve Orcutt will lead the auction on the lawn near the pool at 7:30 a.m. Saturday, with musical entertainment. Proceeds benefit the 49ers scholarship program. Through 2011 the program awarded 41 scholarships.

The goal is to provide at least one scholarship each year to a high school senior who has been a resident of the Death Valley Unified School District at least two years or has parents employed by the national park. The group also sponsors trips for area school children to Death Valley.

The annual parade leaves from the stables at the southwest corner of the Furnace Creek Ranch at 9 a.m. Saturday. It includes a hodgepodge of entries: costume contest participants, hikers, trail riders and members of E Clampus Vitus.

A group of Old Timer Woodcarvers will show off their craft near the art show from 1 p.m. to 4 p.m. Saturday, hosted by Lynn Nicholson, president of the California Carvers Guild. Artist Russ Walker will host a polymer clay sculpture workshop from 1 p.m. to 3 p.m. on the lawn by the pool.

On the final day, musicians will join in singing favorite hymns and gospel sounds during the Sunday Morning Sing at the golf course at 8 a.m. A Catholic mass will be held in the Marquez Room at the Furnace Creek Inn at 10 a.m.

The Death Valley 49ers Annual Meeting takes place at 1 p.m. at the Marquez Room. They will install officers for 2014 and give a wrap-up on the encampment. New members are invited to join. The organization is an all-volunteer, non-profit organization that seeks to expand public awareness of Death Valley.

Family memberships are $35, it includes buttons to access all encampment activities, their annual publication, an encampment program guide and their semi-annual Death Valley News.