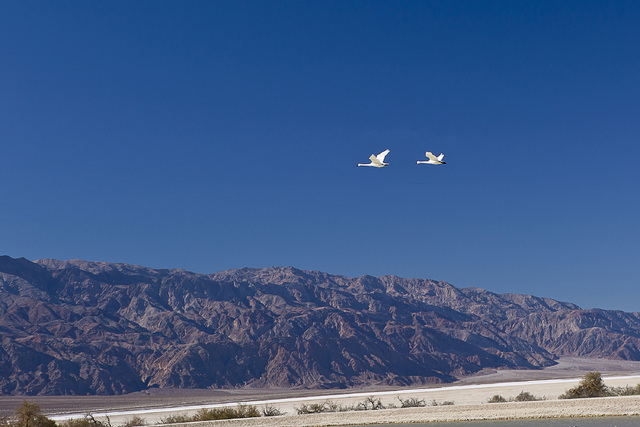 Over 1,000 birds were counted by birding enthusiasts as part of the annual Death Valley bird count on Jan. 3.

Twenty-one volunteers, which included park staff and residents from Pahrump, Henderson and Bishop, caught sight of 45 different species, which included the elusive tundra swan. The swan, which is known to be found in western marshes during the winter months is not frequently seen in the Furnace Creek Wash, Ranch and Travertine Springs where several were spotted.

Like many other swans, ducks and geese, the tundra swan molts and loses all of its flight feathers at the same time which renders it flightless for a few weeks. Though the black-beaked white swan is the most common species found in North America, Audubon Society climate change projections estimate that species number will dwindle by over 60-percent by 2080.

Several other species rarely spotted in the park were the Common Goldeneye, Goshawk, Hermit Thrush and Townsend’s Warbler. Participants debated the identity of a juvenile Goshawk, which was ultimately positively identified by a comparison photo.

Participant Linda Manning said the reason for the debate was because of the Goshawk’s close resemblance to a juvenile Cooper’s Hawk, which is common in the park. There have been only two prior sighting reports of a Goshawk in Death Valley, she said.

Though not spotted on Jan. 3, a peregrine falcon was sighted during the week. That is the third such sighting of the falcon, which indicates that at least one has taken up residence in Death Valley, she said.

A chapter of the Redrock Audubon Society is forming in Pahrump. There will be a meeting on Jan. 28 from 6 p.m. to 8 p.m. at the University Extension Building located at 1651 E. Calvada Blvd. Members are being sought and no experience is necessary. For more information call Rich or Carol Cantino at 775-727-0645.