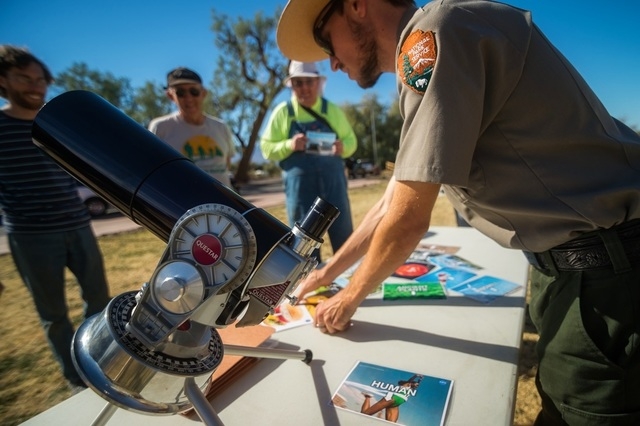 Death Valley National Park is set to celebrate a pair of events next month, with one being out of this world.

Death Valley is hosting the Celestial Centennial Mars Fest, April 8 through April 10 and all are invited to attend this free night-sky and outer-space festival celebrating Death Valley’s connection to the cosmos and the centennial of the National Park Service.

The event is set to include talks, field trips, programs, stargazing, and expositions with scientists, park rangers, and astronomy experts.

“Death Valley National Park is proud to team up with NASA, SETI Institute, Mars Science Laboratory, and many others to showcase the amazing work being done,” said Mike Reynolds, superintendent.

“Death Valley is a great place to bring all of this together for the public to see.”

In addition to being the lowest, driest and hottest point in the United States, being away from bright city lights, Death Valley offers some of the best stargazing in the country. The International Dark-Sky Association has designated Death Valley National Park as a Gold Tier Dark Sky Park, which is the highest rating of darkness.

Reynolds explained that most tourists can’t believe what they can see in the sky at night in the middle of the desert.

“Visitors to the park are often amazed by the amount of stars they can see here,” he said. “Some people have never seen the Milky Way before visiting Death Valley.”

The Mars-like terrain of Death Valley has also helped researchers gain a better knowledge of the solar system.

Death Valley is one of several National Park Service sites that have been frequently used as ‘analog sites’ to test theories and equipment before employing them in space. This year’s edition of the Celestial Centennial plays off previous years’ Mars Fest events, as National Park Service staff and visitors look beyond the red planet and contemplate our place in the cosmos.

Most activities will be based at the Furnace Creek Visitor Center, beginning with the evening of April 8, when astronomer and night-sky advocate Tyler Nordgren will give a keynote address, followed by a live taping of Planetary Radio with Mat Kaplan of the Planetary Society and astronomer Jill Tarter, former director of the SETI Institute.

The park will host day and night family-friendly events on April 9, including festival expositions, stories, demonstrations, and night sky viewings.

Talks and field trips will run throughout the day. Field trips and speakers will continue until mid-afternoon on April 10.

All Celestial Centennial events are free, open to the public, and do not require registration. The schedule for talks, presentations, and field trips is available now and can be accessed by visiting www.nps.gov/deva/planyourvisit/celestial-centennial.

For more information, contact Alexandra Rothermel via email at Alexandra_Rothermel@nps.gov or call 760-786-3277.