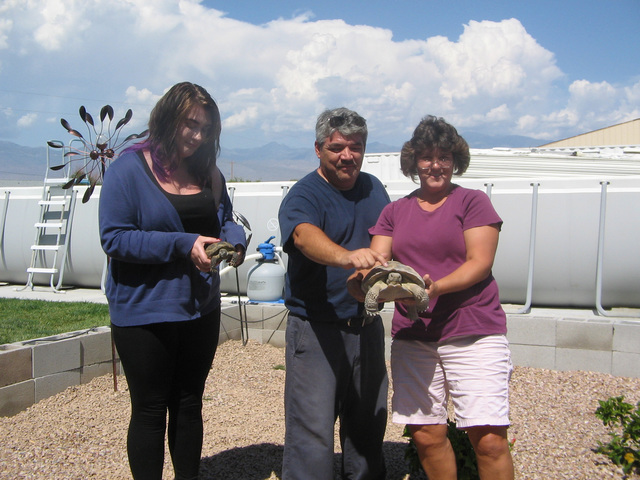 A trio of tortoise lovers, from left, is Amanda "Mandy" Jones with her Russian tortoise Cecelia, and Jerry Foster and Heidi Hill with Shelly, a Mojave desert tortoise adopted from the Tortoise Group in Las Vegas. Brenda M. Klinger/Special to the Pahrump Valley Times 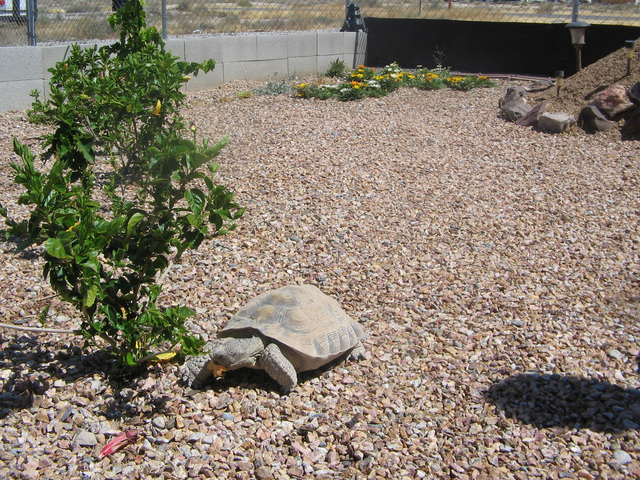 Shelly, a Mojave desert tortoise believed to be in her 20's, makes her way around the enclosed habitat in the backyard of Heidi Hill and Jerry Foster. Brenda M. Klinger/Special to the Pahrump Valley times 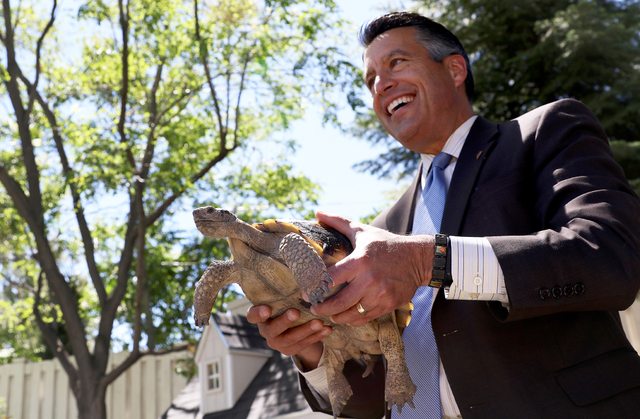 Governor Brian Sandoval recently adopted Carson through the Tortoise Group, a nonprofit organization based in Las Vegas which promotes and protects the well-being of desert tortoises. The group also advocates responsible adoption of the species. Courtesy of Gov. Brian Sandoval's office

Heidi Hill always wanted a tortoise. So her sister, Joyce Wiedeman, who also lives in Pahrump, gave Hill a birthday present by paying the adoption fee for Shelly, a female Mojave desert tortoise.

Shelly was adopted through the Tortoise Group, a Las Vegas-based nonprofit organization that educates and advocates the protection and well-being of desert tortoises in captivity and the wild. They also have an adoption program to rehome tortoises already in captivity.

A few years ago the sisters attended a seminar held in town on tortoise adoptions sponsored by the group. Hill said her sister knew how much she loved tortoises.

“I never had one, but I always wanted one because they were, you know, fascinating to me,” Hill said.

It took several months until the adoption process was completed, and in November, 2014, Shelly finally arrived at her forever home in the tortoise habitat designed in the backyard of Heidi Hill and Jerry Foster.

Within the habitat area, Foster meticulously constructed an above-ground burrow, or shelter, for Shelly, using chat, or crushed stone, on the roof for insulation. Tortoises are cold-blooded and need to stay cool in the summer and warm in the winter. Burrows can be built above or underground as per specifications outlined by the Tortoise Group.

Foster said he didn’t know much about desert tortoises before Shelly, but now he is smitten.

Foster had other pets throughout his life, but this is his first tortoise and he admitted he didn’t think they did much, other than just walking around slowly. He didn’t even think they could hear.

When he comes home from work, he goes to the habitat and Shelly comes out to greet him.

“She does like a figure 8 around my feet, and then she steps on my foot and looks at me like ‘I’m hungry’,” Foster said. “So, then I know it’s feeding time, but yeah, it’s funny, she’s got a personality, she listens to you, she follows you, if you call her over here, she’ll come. I mean it’s just amazing….”

He said she is the best type of pet to have, since tortoises typically outlive their owners. Tortoises can live over 60 years in captivity, according to the Tortoise Group.

Hill said she has learned so much from the Tortoise Group and the seminar she attended, especially about the tortoise diet. She knows someone who found a tortoise and tried to rehome it on their own. It was fed lettuce, which is not recommended because it is sweet and can cause diarrhea and other problems. Hill said the species’ diet is completely different since they live on stuff in the desert.

Shelly is fed a specialty food formulated for tortoises and recommended by the Tortoise Group.

Hill also learned to never turn a tortoise upside down.

Tortoises and turtles are two different species and should not be confused with each other. Tortoises are terrestrial, while turtles live in water. Hill said the only time tortoises are in water is when they drink it through their mouth or snout or absorb it from their anus.

Also, tortoises don’t hibernate like mammals, but instead brumate.

Hill’s daughter, Amanda “Mandy” Jones, already had a 10-year-old Russian tortoise, Cecilia, when she came to live with Hill in Pahrump. At first there was some hissing and discontent on the part of Shelly toward the new visitor, who is smaller in size, but now the tortoises are living in harmony in separate burrows after Foster built a second one.

Jones said there are advantages to having a tortoise as a family pet since they are low maintenance.

“It kind of depends, if you’re the kind of person that just wants a pet and you can leave and come and go as you please; they kind of take care of themselves, but if you want a pet that you can take for walks, then you’re not going to want a tortoise,” she said.

Hill added that they are quiet and they don’t chew up anything. Just make sure they have water and they’ll take care of themselves. You can go on vacation and won’t need your neighbor to come watch a pet.

Sarah Mortimer is the adoption coordinator for the Tortoise Group and said, “I think the biggest message that we want to get across is that, you know, people can have these as pets. I think it is a big common misconception that people think that it’s illegal to have them as pets.”

The two categories of the wild and captive tortoises are considered separate populations.

The Mojave desert tortoise, Gopherus agassizii, is listed as threatened and protected since 1989 under the U.S. Endangered Species Act and the Nevada Administrative Code.

Anyone who got a tortoise prior to this time has been grandfathered in under the act.

Mortimer said her group is not a law enforcement agency and will assist anyone with a tortoise, whether it was adopted legally through them or not.

Don’t mess with them in the wild at all by disturbing, touching or capturing, Mortimer advised. If you want one, contact the Tortoise Group.

“We’ve got plenty in captivity that are looking for homes,” she said, with a list of over 100 up for adoption. The animals can live to be 100 years old.

If anyone has a tortoise and wants to get rid of it, don’t release it back into the wild, or dump it in the desert, since that can be really harmful to the wild population. Upper respiratory tract infections are common among the tortoises, but they are easily treated with antibiotics in captivity. Contact the group for help in rehoming it.

In June, Gov. Brian Sandoval adopted Carson, who is living on the grounds of the Governor’s Mansion in Carson City.

Unlike Sandoval, whose term is up at the end of 2018, Carson won’t be leaving the mansion. He is now a permanent resident, a “mansion mascot,” as the governor described him, and could be around for a long, long time.

Desert tortoises can live to be 100 years old.

“It’s a chance to have a legacy here at the mansion … and also a mansion mascot as well,” Sandoval told the Las Vegas Review-Journal in June.

“This is something the children and the people of Nevada can enjoy for generations. Even better, it’s our state reptile.”

According to the Tortoise Group’s website, desert tortoises in Nevada are considered wildlife and belong to the people of the state. Those who legally adopt them are considered “custodians”, instead of owners, even for those in captivity.

The group promotes spaying or neutering the tortoises and sponsors sterilization clinics to prevent backyard breeding and overpopulation.

“These guys can breed like crazy,” Mortimer said. A female can lay anywhere from zero to 12 eggs in a clutch and can have up to three clutches a year. Two tortoises can quickly multiply to 30 in one year. Also, females can store sperm in their system for several years.

Mortimer said there is still time in the season to consider adopting a tortoise. Depending on local interest, another workshop may be held in Pahrump soon.

Mortimer said if you already have a tortoise, you can register as its “legal custodian” by also going to the group’s website.