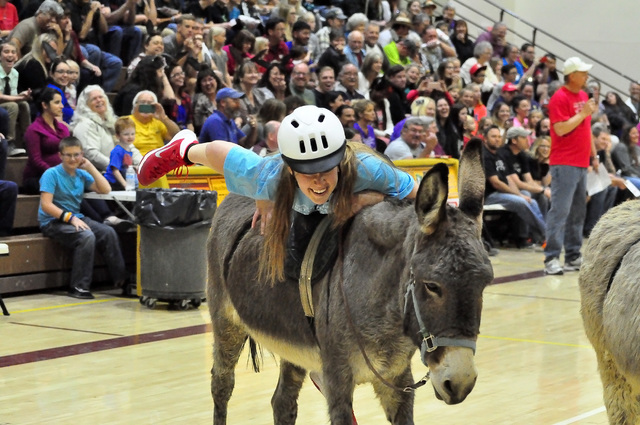 Donkey basketball returns to the high school gym for the fifth year in a row. Call the middle school or high school to get tickets. Horace Langford Jr / Pahrump Valley Times

It’s that time of year again when the asses run wild at the high school for the annual donkey basketball game and we are not talking about the students.

Donkey basketball is in its fifth year and still going strong. It’s a real basketball game involving grown people trying to ride a donkey while trying to shoot baskets.

This year the game will be on March 3 at 7 p.m. at the high school gym.

The game is a fundraiser for the high school and the middle school.

The successful fundraiser was started four years ago by Rosemary Clarke Middle School Principal Tim Wombaker to raise money for a special fund for his students that pays for incentives and rewards for those who do well with grades, testing and attendance.

Both the high school and the middle school have a lot riding on the game and both teams want the win.

Schuerger is sure that the high school will come out on top, revealing some classified high school tactics as she spoke.

“It’s anyone’s game,” she said. “Whoever picks the donkeys that move the best have the better chance. We’ve gone back and forth and have had some good games. The donkeys have a mind of their own. Getting them to go where you want is a challenge. I haven’t been injured yet, but I almost felt like I was going to be sandwiched by the donkeys last year.”

She then held up her index finger and shouted that Pahrump Valley High School rules.

But what about winning? She kept to herself and dodged the question, and then accused Rosemary Clarke of being over the weight limit.

“To watch people try to get on donkeys and fall off of them, it’s kind of funny,” she blurted out. “Tim (Wombaker) does the best he can. He’s a very competitive guy, which makes it fun to play and watch him. I honestly think that most of the people playing donkey basketball are over the weight limit. Maybe there should be a weigh-in. I honestly feel bad for the donkeys. Or make the bigger players be on the bigger donkeys. Makes sense.”

Rosemary Clarke had a chance to respond but Veloz just wanted to talk about cheese and his brother Ben Veloz.

“Ben may be known as Nacho Cheese, but I know him as ‘Rideswithdonkey’,” he said. “He is a natural on the donkey and has been our leading scorer every game, while the rest of us have come up with less than Joe has managed to find on the court.”

We have a crew of sports writers now trying to find out what Veloz was trying to say. The PVT thinks he was just trying to say, “Go to the donkey basketball game and have fun.”

Donkey Sports Inc. of Entiat, Washington will be providing the donkeys and the officials. The game is simple.

Tickets are on sale now at Rosemary Clarke Middle School and Pahrump Valley High School. Advance ticket prices are $8 for adults, students 7th-12th are $6 and children K-6th are $4.

Tickets at the door are $9 for adults, $7 for students and $5 for children.

Note: the interview was done in fun to promote the fundraiser. At no point was anything serious said.