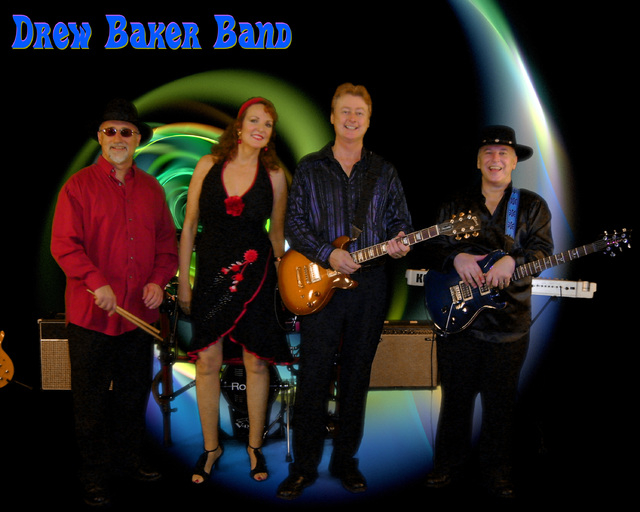 A number of entertainment choices are set for this weekend including the Drew Baker Band at the Nugget, the Reeves family is playing in two locations, a fundraiser at Draft Picks and Movies in the Park begin.

The Drew Baker Band has played at several Pahrump locations, including Lakeside Casino &RV Resort for the annual Memorial Day celebration. This weekend the group will be on stage at the Stagebar Lounge beginning at 8 p.m. Friday and Saturday nights.

The group hails from Las Vegas and performs hits from rock to country and Top 40 to easy listening.

The band caters the set lists to the venue. So, whether it’s a private party or a corporate dinner, special events or nightclubs around town, downtown and the strip, they do it all.

Band members are leader Drew Baker on lead vocals, guitar, keyboard and keyboard bass. Valerie Rose Carter is the group’s lead singer called “extraordinaire and gorgeous” on the band’s website, which is under construction.

Bob Kuhn is on drums and Nick Chiolo plays drums and other percussion instruments.

Matt and Cole Reeves will be playing at the grand opening of “Big’s Place,” next to Paddy’s Pub, starting at 11 a.m. Restaurant owner Eric Webb is Jack Reeves’ son. There will be a bounce house and games for the kids.

Movies in the Park starts June 7 at dusk in Ian Deutch Memorial Park.

Movies will run every Saturday through July. This weekend will feature Disney’s “Frozen.”

Bring blankets or chairs. Concessions will be available and proceeds will benefit Trojan sports. Coolers are not permitted, but participants may bring snacks. It is a drug-, alcohol- and tobacco-free event. There is no admission fee.

The event, organized by Sara Chapman, Commissioner Dan Schinhofen’s daughter, will feature Dan and some of his musician cronies providing the entertainment.

There will be raffle prizes, T-shirt sales, shaved ice, and the cost for $1 per person per game.

On May 19, Mikey Welch, a local elementary school student, was diagnosed with leukemia. The child has a long fight for his life ahead of him and all proceeds will go to aid the family with medical expenses.

An account for donations has been set up at Nevada State Bank and a website is taking donations as well at www.gofundme.com/supportmikeyandashley

First Saturday, a celebration of vendors, music and food, will be held between GEMS BBQ and Attorney Glen Lerner’s parking lots. The monthly event began in May.