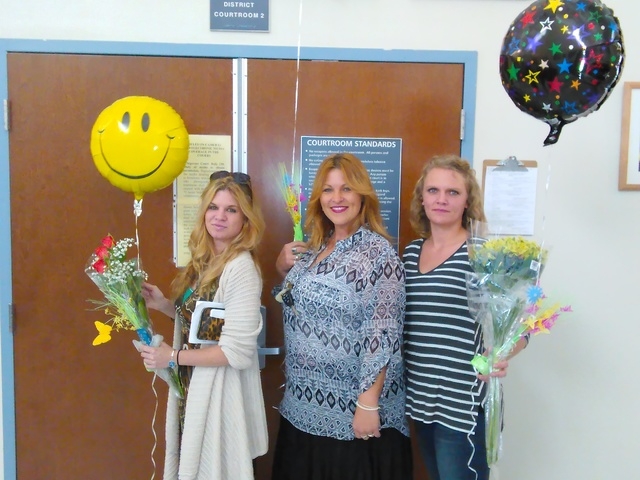 Additionally, it was also is designed to provide an alternative to incarceration and to help participants become and remain drug free so they may get back to living healthier, more productive lives.

All three share similar stories on how they became addicted to drugs and what it took to become sober.

Jennifer Benedict, who has three kids, began using in 2002, and was sentenced to drug court along with three years’ probation for possession of a dangerous drug without a prescription.

The drug was a generic form of Xanax, however, she said her first drug of choice was methamphetamine.

She was once arrested in California, and again in Pahrump back in 2014.

She said it was drug court that saved her life.

“I don’t think I would have been able to quit drugs without drug court,” she said. “Drug court is the main reason why I’m doing so much better right now. I am now employed and I have my family back who trusts me. I’m about to get married and have a stable relationship. The WestCare outpatient program helped me to learn about healthy relationships and unhealthy ones.”

Pahrump’s WestCare provides health and human services in both residential and outpatient environments for addiction treatment and other services.

Benedict also credited her friend Pam with recovering from her addiction.

“She saw it in me that I could do better and she didn’t want to see my kids get taken away by the state,” she said. “She helped me with my children while my mom and my dad took my daughter and raised her. I am getting married on April 23rd, and now that I’m around my family again, I’ve had so many good times.”

From her experience, Benedict offered up advice for others who may get the urge to use drugs.

“I would simply tell them not to get started,” she said. “There is always that urge to use again, but I go to my AA and NA meetings. There will always be that addictive behavior, but you can just change it by doing the right thing. Show me who your friends are, and I’ll show you who you are. I don’t hang out with them anymore. I have my kids and my new fiancé and loving parents.”

She was arrested three times and was originally given probation, but soon afterward, violated the order and ended up behind bars – again.

McKiernan was in the program for 13 months.

Like Benedict, McKiernan credits drug court with her recovery.

Additionally, McKiernan said she does not get the urge to use drugs again, after turning her life around.

“I still continue to go to meetings and I have a whole new life,” she said. “I stay with the program which helps me stay clean. I got my life back, I got my family back, and I have custody of my kids. I also have a good job. I have all the reminders every day in my life why I shouldn’t go back to using drugs.”

McKiernan also imparted some sage advice to would-be drug users and those who have been ordered into the drug court program.

“My best advice to someone young, is just don’t get started,” she said. “There are a lot of new people who get into drug court each week, and they really fight the system. If they put as much energy into doing the program instead of fighting it, they would see that it is there to help them. I think drug court saved my life.”

For Jessika Burke, her drug use began in 2011 and she was arrested that same year.

She racked up another arrest in January of 2014.

Unlike McKiernan, Burke said she initially loathed the drug court program when she first entered.

“I wasn’t ready for drug court back then,” she recalled. “I ended up dropping out, six and a half months into the program, because I thought that I had my problem handled. I ended up relapsing and for the next two years of my life I was living miserably on the streets, addicted and I couldn’t find myself out of it.”

Following her 2014 arrest, Burke wrote the court a letter, asking for another chance.

She said she had really become aware of her problem and wanted to restart the program.

“The court wrote me a letter back saying that if all of my drug tests came back negative, I would be able to get back into the program,” she said. “I had hit the point of insanity to such an extent that I had wound up being sent to the Lakes Crossing Mental Institution in northern Nevada.”

While at the facility, Burke said she was relieved when doctors told her she was well enough to return home.

“I underwent a mental health evaluation and they told me that I was sane and well enough to come home,” she said. “I absolutely love drug court and I love everything about the outpatient rehabilitation program. It saved my life.”

“It was definitely methamphetamine for the upper, and then to come down off of meth, I would drink anywhere from a pint of liquor to a full bottle, while taking many prescription medications like Oxycontin, Xanax and Valium.”

Maintaining her sense of humor, Burke said a lot of her problems began after hitting ‘rock bottom.’

“You could say I got myself into a deeper hole once I hit rock bottom just to prove that I could go even lower,” she said. “I don’t have any children, thank God. I still stay with my grandmother and my mom and it definitely tore a hole through my relationship with them.”

Burke noted her drug use affected her state of mind to the point of mania.

“I had become so paranoid and angry,” she said. “It got to the point where I was just such an angry and depressed personality, that all I would do is sit there in my room and stare at the floor.”

Burke said it was difficult at times for her to stop using, but once she came to grips with her plight, she was able to see and think differently.

Her recovery began soon after picking up an Alcoholics Anonymous and Narcotics Anonymous book while incarcerated.

“I was able to be honest with myself and once I made that commitment to the first step by admitting that I had a problem, it wasn’t all that hard. I began working the steps and I realize that I was working them naturally. I began reading the books and highlighting it with my colored pencil. As I was highlighting it, I realized that I was ready, and that it was working naturally and I didn’t have to struggle. With my first time around, I was struggling because I was fighting it.”

Burke is now gainfully employed and looking forward to the next chapters in her young life.