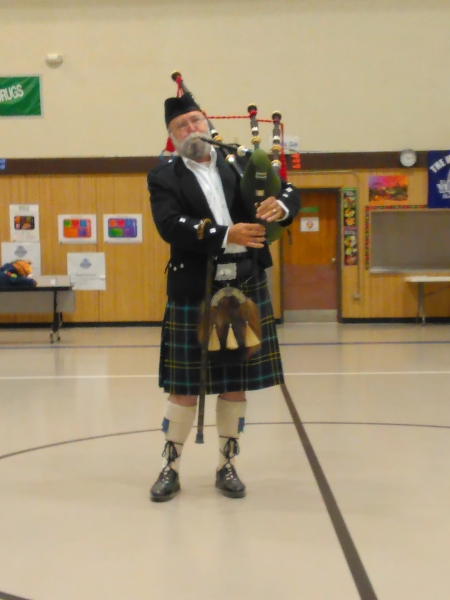 It’s considered one of the oldest musical instruments on earth and contrary to popular belief, its origin is not the British Isles.

The bagpipes are a class of musical instrument, aerophones, using enclosed reeds which are fed from a constant reservoir of air in the form of a bag.

On Wednesday, faculty and students at J.G. Johnson Elementary School were treated to a brief performance courtesy of substitute teacher Leo Marchetti.

The performance was part of the school’s Student of the Month Assembly.

Marchetti, who offers lessons in bagpipes, said he started playing the instrument when he was a junior high school student.

“The teacher surprised the whole class by having him come to school during our history lesson and play the bagpipes and I was sitting right in front of him and it was awesome,” he said. “That really got me interested and I took two 2 months’ worth of lessons from him after high school but I dropped out of it.”

A few decades later, Marchetti decided to pick up the bagpipes again back in 2003.

He spoke about the history of the ancient instrument.

“There is sheet music for bagpipes and there are thousands of tunes because you’re talking about a 5000-year-old instrument,” he mused. “They didn’t start in Scotland, but in Egypt, where they started off with just the bag, the mouthpiece and the chanter. They then adopted the drone, which is one of the three larger ones.”

Marchetti, who is also accomplished on the drums, guitar and violin, said there is a certain degree of difficulty when it comes to mastering the instrument.

“It is difficult to play the bagpipes and actually I think it’s one of the most difficult instruments to play,” he said. “The only one that would be tougher is the Irish pipes and they are very difficult. This is the first wind instrument I picked up.”

Marchetti said back in 1754, the King of England categorized bagpipes as a weapon of war but they’ve been used for everything from weddings to festival parties.

As a universal instrument, he noted that the bagpipes are also played during somber occasions, funerals being a predominant one.

Due to his busy schedule, Marchetti practices as often as he can and he encourages others to consider learning how to play, but warned it’s not a cheap hobby.

“Bagpipes are expensive and they are impervious to heat, cold weather, wet weather and dry weather,” he said. “I would encourage others to learn the bagpipes because it is very fun to play. Anyone who wants to learn can contact me because I give lessons.”

He said his genealogy branches all throughout Western Europe.

“Most all Scottish have tartan plaid which is a type of plaid,” he said. “In fact, countries throughout Europe have their very own plaid. From my experience, usually the Irish have a solid color plaid, but the original kilt is what you would see in Rob Roy, where they fold it all on the floor and roll into it.”

Marchetti is not alone in his love for the instrument.

He said he knows of at least one other person locally, who also plays the pipes.

“There is one student at the high school who plays the bagpipes and I’ve been trying to work with him to get him to play more and hopefully we’ll be able to play together sometime,” he said. “In the rest of Nye County, there are no other bagpipe players that I am aware of.”

“We are lucky to have Leo Marchetti and he does substitute teaching for us numerous times during the year,” he said. “I welcomed him to our next assembly and he took me up on the offer. He is a spectacular player and it was a wonderful presentation.”

For information on bagpipe lessons, Marchetti can be contacted via email at leom702@gmail.com.