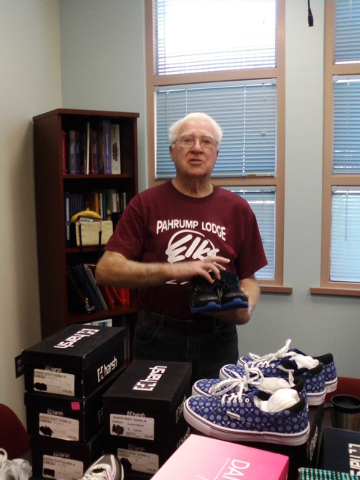 According to Linda Fitzgibbons, school district homeless liaison, this is the current number of homeless students in the district. This number will fluctuate from week to week.

Fitzgibbons said the Elks bought all the shoes through a grant. Each year Elks Lodge 2796 applies for a grant and then buys the shoes for the students.

“At the moment we have stacks of shoes thanks to the Elks that are stacked as high as five feet tall,” she said on Monday. “We started distributing the shoes at Rosemary Clarke Middle School on Friday of last week and will finish on Thursday.”

For the third year in a row the Elks distributed shoes to the homeless students to the tune of $4,000 worth of shoes, which translated into 329 pairs. Big Five donated $500 to the cause which brought the total to 363.

Lester Geohring said John Berg, a former Exalted Ruler of the Elks, came up with the idea.

“This was one of his ideas three years ago,” Lester said. “The kids come in to fit their shoes and then get to walk out with a free pair.”

At Hafen Elementary, the group distributed 31 pairs of shoes.

Pat Loetterle said she was amazed how proud that some of the students were.

“We have done one school,” she said. “It’s amazing how that some refused to take them.”

Homelessness is defined by the federal government by the McKinney-Vento Homeless Act and is all children who don’t have a fixed, regular or adequate nighttime residence.

She added that under this act foster children are also considered homeless.