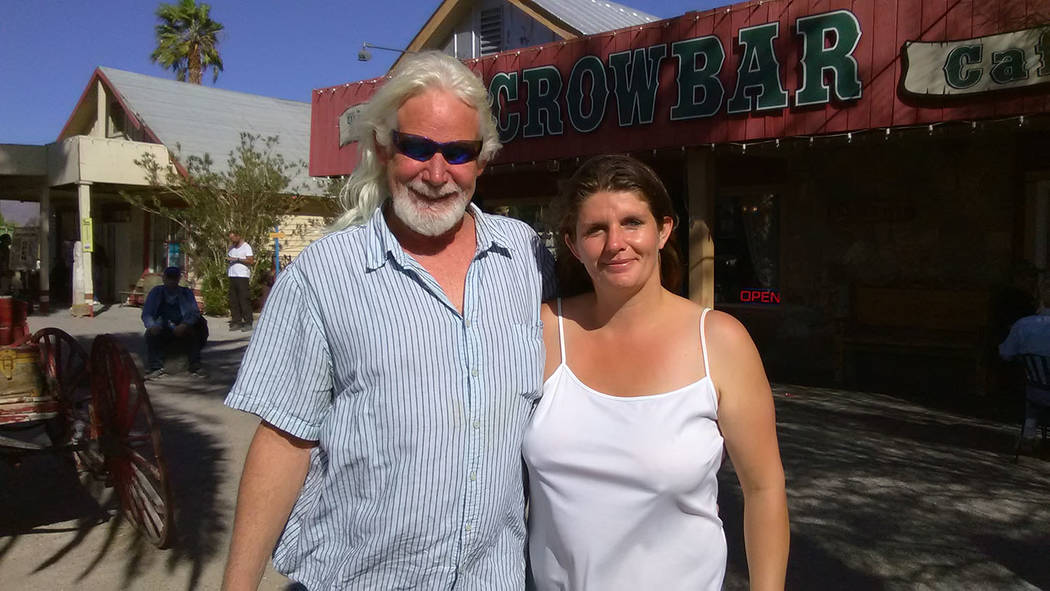 Selwyn Harris/Pahrump Valley Times Pahrump resident Jenifer Turman, right was out strolling the grounds with her friend Steven. Both enjoyed the annual event, except for the gusty wind conditions on Saturday. 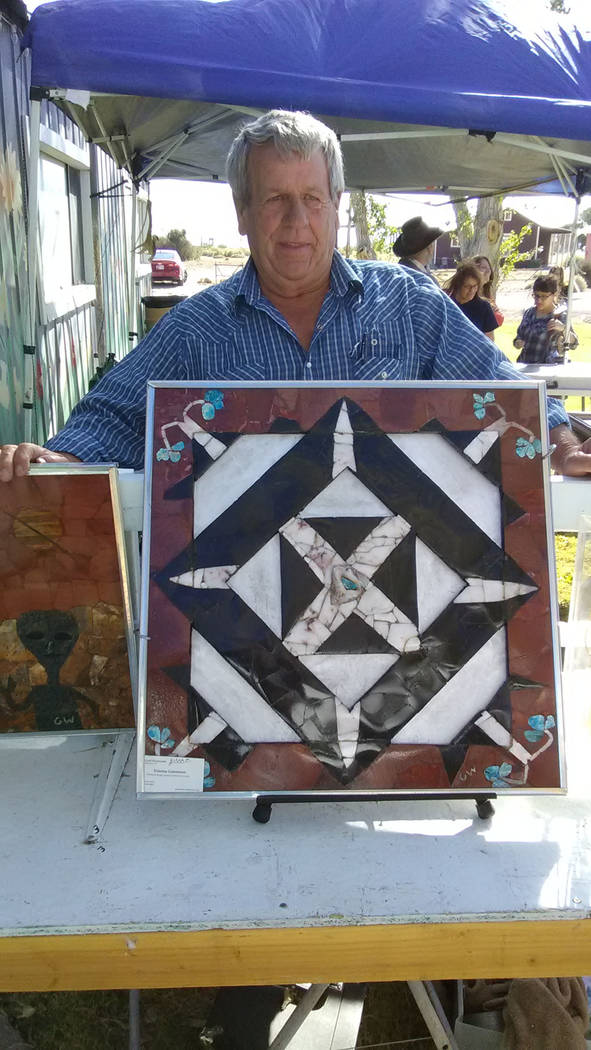 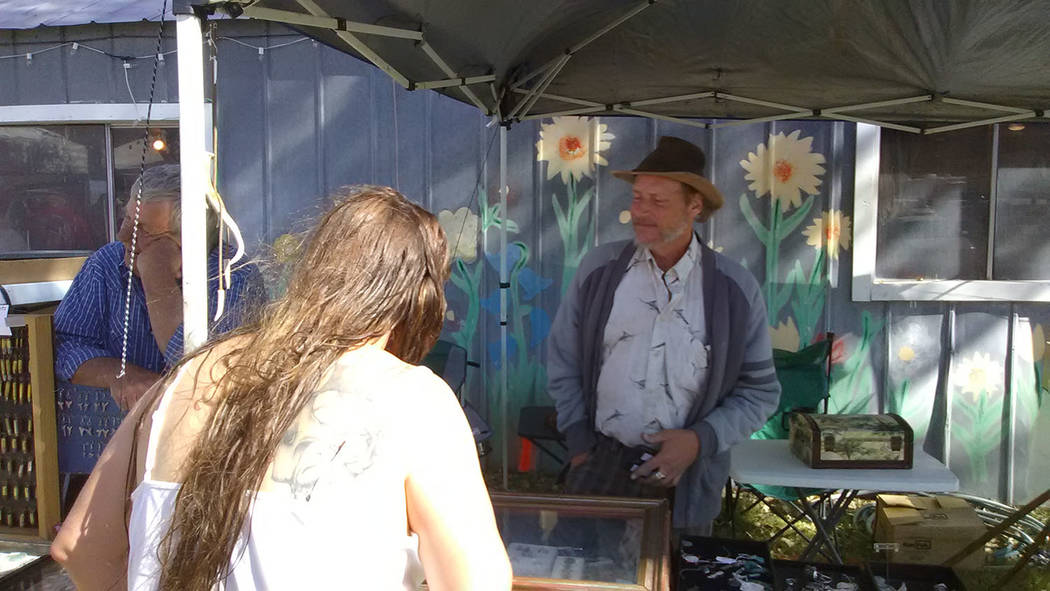 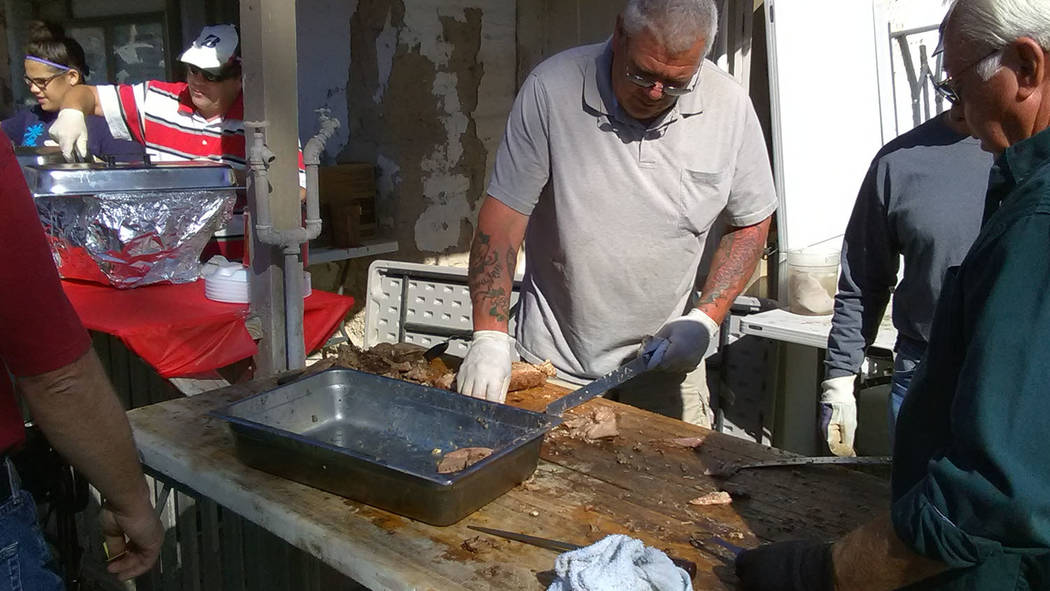 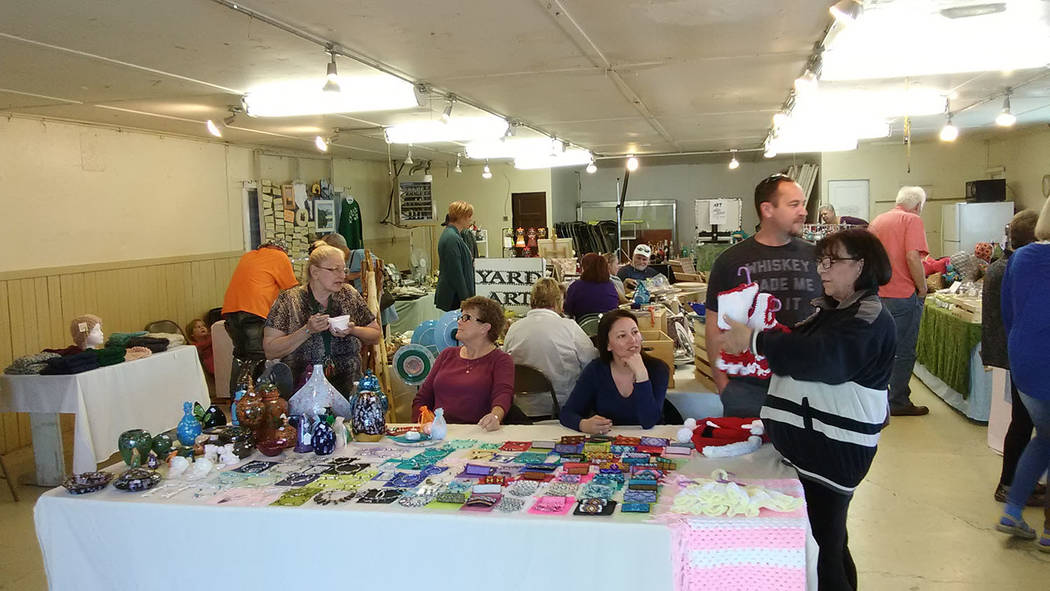 Selwyn Harris/Pahrump Valley Times There was no shortage of visitors at the arts and crafts portion of the Old West Days event this past weekend, as scores of shoppers and browsers visited the show.

An annual autumn event returned to the community of Shoshone, California this past weekend as Old West Days began its three-day run.

Each year, Shoshone Village recognizes the heritage of the area by joining history enthusiasts, along with vendors, food and live music, to the area, just a scant 28 miles from the heart of the Pahrump Valley.

Tours and a host of other festivities were also offered to the hundreds of visitors at the Old West Days event.

One such visitor was Pahrump’s Geoff Wordsworth, who set up shop as a vendor for the event.

Wordsworth’s business is known as Tularosa Gemstones, where for the past 30 years he’s created rock art pieces and gemstones.

“Things are going pretty good today, despite the winds,” he said on Saturday. “We’ve got a good crowd so there’s a lot of people here today. This is my second time participating in Old West Days as a vendor. I’ve been doing business in Pahrump for about seven years. I don’t know whether there is a proper name for my artwork. I just do what comes into my head, so I work with different kinds of rocks. It’s just what I like to do, so I keep doing it. Sales have been OK today so far. Last year was pretty good too.”

Another Pahrump artisan at the event was Marty Schiller.

His business, Marschil &Constance, involves jewelry making and repairs, along with appraisals.

“It’s been great here and there’s a lot of friendly people out and about,” he said. “I’m glad to see that a lot of people from Pahrump came out here. I have been coming out here for quite some time each year and this year makes it my fourth year attending. So far, I have had quite a few people stop by my booth, even though it’s fairly windy today. I’ll be here for all three days.”

Pahrump resident Jenifer Turman was out strolling the grounds.

She, like many others at the event, spoke about the gusty weather conditions.

“It’s too bad the wind is so high today, but other than that, we’ve seen a lot of cool stuff,” she said. “I have lived in Pahrump for the past seven years, but this is my first time visiting the Old West Days here in Shoshone.”

Nevada District 36 Assemblyman James Oscarson said he was very pleased with the overall turnout of visitors attending the event.

“It’s wonderful to see a lot of people here from Pahrump and Amargosa Valley,” he noted. “How much better does it get when you have homemade crafts, great barbecue and great music? This is just a wonderful way to spend the weekend here in Shoshone. I have visited this event several times over the years, and it’s certainly not an event anyone wants to miss.”

Additionally, Oscarson commented on the added revenue the event brings to the area each year.

“Obviously, it’s good for the economy when you consider that a lot of people who come from Vegas, will obviously drive through Pahrump, where they will stop in Pahrump to purchase gas and provisions for the trip,” he said. “There is plenty here to keep people happy, I am so happy for the town of Shoshone, where they are doing such a great job. This is a real fun event because it’s kind of laid back and relaxed. It’s a wonderful place for families to come and have fun for the weekend.”

The event opened Friday evening with a reception at the Shoshone Museum.

This year’s keynote speaker was Robin Flinchum, a freelance writer and editor living in Tecopa, California.

Musical entertainment was provided by Seth Turner and the High Desert Drifters, along with Joey Vitale’s One Man Band at the Crowbar Patio.

The popular barbeque and craft show was also part of the festivities throughout the weekend.