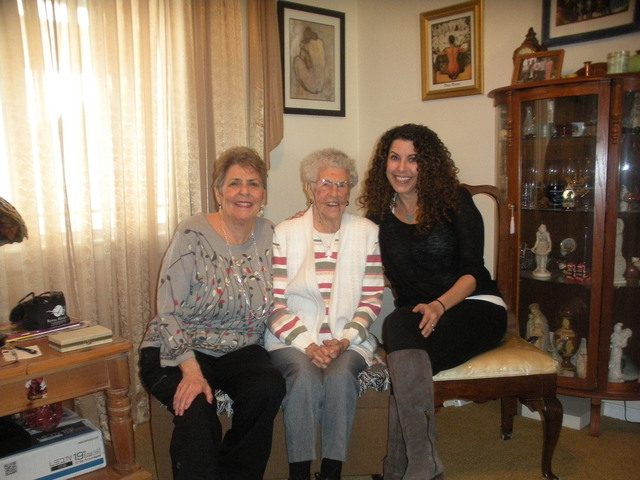 An impromptu family reunion took place this week in Pahrump for the birthday of resident Carmen McFarland, who turned 104 years old this month.

McFarland has a very intriguing backstory, according to her daughter, Armida Derkas.

Of Mexican heritage, McFarland, born Maria Carmen Farfan in Morelia Michoacan, Mexico on Feb. 13, 1913. As a young girl, she and her mother would often travel back and forth between the United States and Mexico to work.

She was working in Needles, California as a “Harvey Girl” for the Harvey Hotels. The hotels were part of the Harvey House chain of restaurants, hotels and other hospitality businesses first built alongside railroads in the western United States.

“The Harvey Girls were women who worked at all the railroad station hotels back in the early 1920s,” Derkas said. “They would clean the hotels and do the laundry and such.”

More than a decade later, McFarland met and fell in love and married her first husband, Manuel Torres, in 1936.

The couple had a son and daughter, Alfred Torres and Armida Torres Derkas. They eventually moved to Los Angeles where her husband’s family lived.

Over the years, Derkas’ father moved the family around California while working for the railroad, finally settling in Sacramento.

“They eventually settled and retired in northern Nevada,” she said. “Ollie passed away in 2002 and mom continued to live in Carson City. We retired and came to Pahrump in 2004 and built a house with a casita.”

Derkas said her mother has slowed down some of her activities the last few years due to health issues.

“She was diagnosed with lymphoma when she was 90 years old,” she recalled. “Mom went into remission for nine years but it came back about three years ago. She went through three months of chemotherapy, and she’s been fine ever since.”

As far as hobbies are concerned, Derkas said her mother’s leisure time consists of gardening, embroidery and reading.

She noted her mother doesn’t get out as much as she used to a few years back.

“She used to go to the Pahrump Senior Center quite a bit but the last five years, her hearing has gotten really bad so she does wear a hearing aid,” Derkas said. “She also used to be very active with the Catholic church, but she became very self-conscious of her hearing impediment and it was very difficult for her. She also used to visit the DAV Women’s Auxiliary, but the last couple of years she stopped doing that because of her hearing.”

Unlike many centenarians in the country, Derkas said her mother is very independent and outspoken.

“My mother just likes to do things her own way,” Derkas said. “As far as her reaching 104 years old, my mother would tell everybody she does everything in moderation, which includes drinking, eating, and even sex. She has never been overweight or heavy. She does take two pills a day which are for her high blood pressure and her thyroid.”

On the issue of her mother’s diet, Derkas said they don’t consume as much red meat as they used to.

“We eat a lot of chicken now and we normally have vegetables and a salad,” she said. “She also loves salmon. We limit our red meat intake at the most, to two or three times a month. She knows when she’s done eating and has had her fill and that’s it.”

Though McFarland prefers to stay close to her home, she remains active there.

“She still enjoys reading, watering her plants and working out in the yard,” Derkas said. “When people ask her why she thinks she has lived such a long life she tells them that she never smoked, always worked hard, stayed active, and did everything in moderation including eating, drinking and even sex. She still enjoys a small glass of Merlot with her lunch. I just think she is incredible. She has the attitude that she put everything in God’s hands, and whatever comes down the pipeline, you accept it and you deal with it. That’s it.”

“She is loved by many, many, family and friends and is a role model and inspiration to all,” Derkas said.