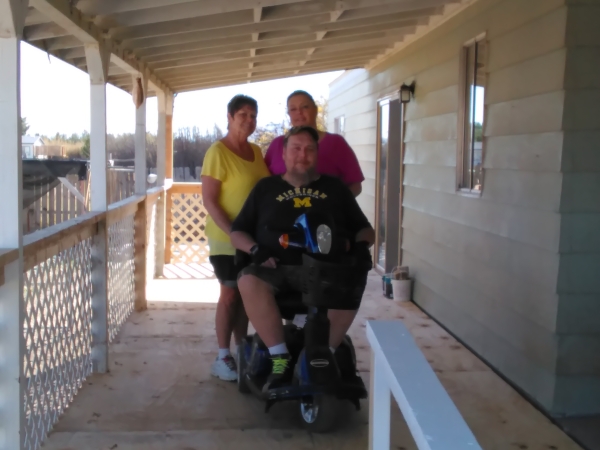 The spirit of giving was very apparent this month to one new local resident suffering from health issues.

Fred Belt moved his family to Pahrump from Michigan roughly a year ago after doctors said the warm climate and low humidity in southern Nevada would help with mobility of his bones and joints.

Though the Belts found a home they liked, along Blosser Ranch Road, it needed some work.

Belt, who requires a motorized scooter to get around said the surface beneath the home’s entryway was in bad condition and in need of repairs.

He was concerned it may collapse one day.

Assistance came by way of a local organization dedicated to helping others.

Before he knew it, roughly 10 to 15 volunteers with tools in hand, converged on Belt’s home and began building a new deck along with access ramps.

“My sister met someone who told us the Pahrump Rotary Club could help out,” he said. “They came out and looked at it and said they could build a ramp. Home Depot provided the lumber for the deck. It was cool because everything came together all at once.”

Belt said once the project got underway, it took about four days to complete, as the materials began arriving at the residence.

“The deck was here one day, then the ramp arrived, and the deck was built the next day,” he said. “They came out here and just started banging away and they got it all done,” he said. “I am so very grateful for all of this and it was awesome. The Rotary Club told me they do about three projects like this each year and this one was the last one for the year. It’s a great holiday gift.”

As a result, Belt said he now wants to help the organization that helped him and his family.

“I am very happy and I was talking to my sister about possibly joining the Rotary Club,” he said. “The local company Encompass provided over $500 worth of labor for this project.”

Belt’s mother, Monica, said she was grateful for all of the entities who came together for the project.

“I love it because it’s so much safer for Fred,” she said. “I was even scared to walk across it because it was in really bad condition, and it was in danger of collapsing I’m so grateful for this.”