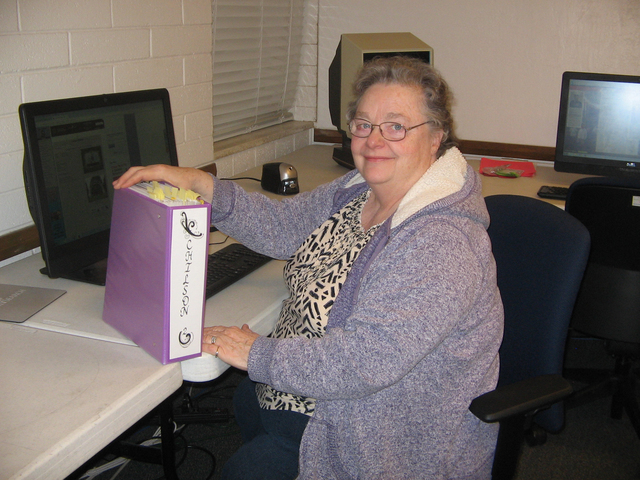 Pahrump resident Judy Theel is a regular patron at the FamilySearch Center. She developed her interest in genealogy from her late mother, who started when she was a teenager until she died at age 74. Theel has about 30 notebooks full of information about her ancestry. Brenda M. Klinger/Special to the Pahrump Valley Times 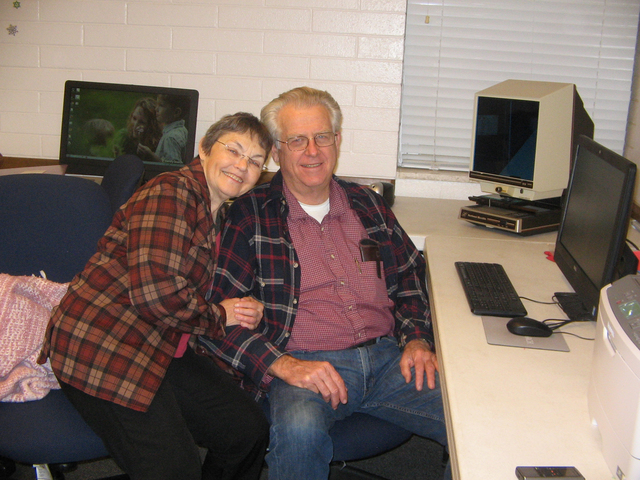 Linna and Andy Barnum share a family moment at the Pahrump FamilySearch Center where they volunteer while researching their own family roots. The center is located at 921 Wilson Road in the building of the Church of Jesus Christ of Latter-day Saints. Brenda M. Klinger/Special to the Pahrump Valley Times 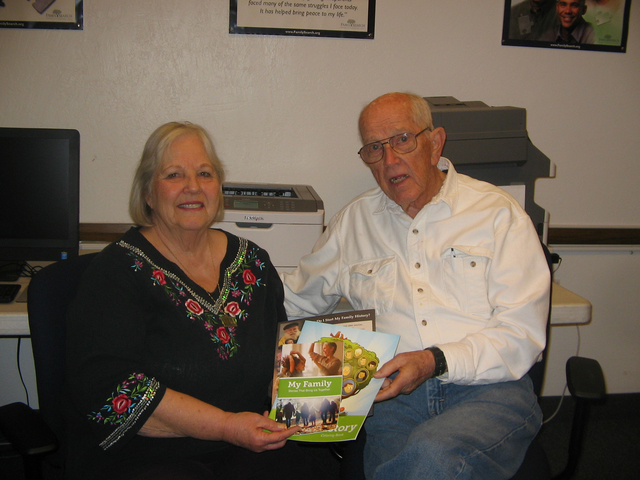 Judith and John Luellen are co-directors of the Pahrump FamilySearch Center, sponsored and funded by the Church of Jesus Christ of Latter-day Saints. The center provides free help and access to a variety of websites for people tracing their family ancestry. Brenda M. Klinger/Special to the Pahrump Valley Times 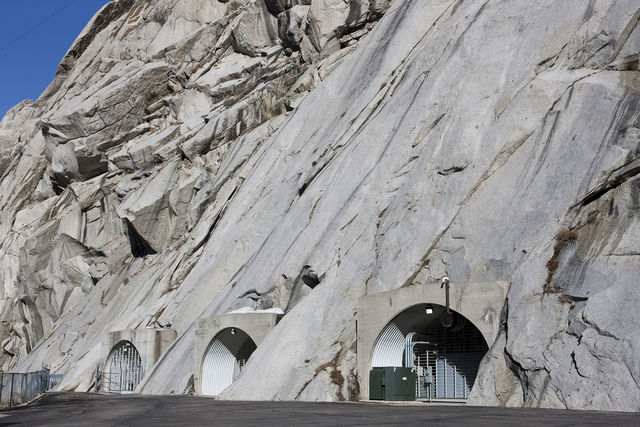 The Granite Mountain Records Vault was completed in 1965 by the Church of Jesus Christ of Latter-day Saints in the mountains outside of Salt Lake City. The mountain repository maintains the proper climate for long-term storage of valuable worldwide family history records on microfilm and microfiche, which are currently being digitized and indexed for online access. Courtesy of 2016 Intellectual Reserve, Inc.

If you have not made a New Year’s resolution yet, here’s a suggestion: How about researching and tracing your family ancestry?

The Pahrump FamilySearch Center offers free assistance, programs and classes to help individuals research their family roots and shake out the family tree.

Judith and John Luellen have been volunteers and co-directors of the center, which dates back to 2010, since August 2014.

The center is a non-profit organization operated and funded by the Church of Jesus Christ of Latter-day Saints, but is open to people of all faiths.

Judith Luellen said the beginning of a new year is typically very busy. She said genealogy is a very popular hobby, the second largest one in the United States behind gardening.

“It’s just that people start in the new year, and they say ‘I’m going to find out about my family,’ and so they start working on genealogy,” she said. “And then they get the bug; we call it the spirit of Elijah.”

The study of genealogy is part of church doctrine for members of the Mormon church, based on the belief that families are forever.

“We believe that we are tied to our families and that me, as an individual, is part of all these generations of my family,” Luellen said. “This is why we want to find out who our family is, what their story is and connect them back to us.”

Luellen, a lifelong Mormon, started researching her family after reading a book written in 1965 by her aunt, a genealogist.

“I would look at that book, and since that time, reading the stories of my ancestors that she had in there got me hooked.”

John Luellen got interested in genealogy after marrying Judith. Until then, he never paid much attention to his ancestry.

“When I was a youngster, my family used to get together and have these big reunions, and they always kind of bored me because there was a lot of people there that I didn’t know,” John Luellen said. “Now I wish I had paid more attention.”

The center is equipped with computers with free access to a variety of websites, including Ancestry.com, Findymypast.com, MyHeritage.com and many others, including FamilySearch.org. The center networks with the Family History Library in Salt Lake City. There are also volunteers who can help in the search to uncover birth, baptismal, marriage, death and other records to connect individuals with their ancestors.

“If you want to do it at home on your own computer, you buy, you pay for it,” John Luellen said. “We have all of them for free.”

Resident Judy Theel, a regular patron, was delving into her maternal grandmother’s ancestry under the name of Chilson during a recent visit to the center.

Theel said you don’t necessarily need to be a history buff to research your genealogy.

“But you sure get in the middle of history,” and agreed that it takes a lot of detailed work.

“We find out we have pirates and everything else in our line,” Theel said.

Her late mother was interested in genealogy since she was 17 years old, and was involved with it until she died at 74.

“This feels like a part of her, you know, when I’m working on this,” Theel said.

One of her favorite sites is Findagrave.com, which she said has helped in adding to her vast inventory of family research notebooks, about 30, started by her mother.

Andrew “Andy” and Linna Barnum also spend a lot of time at the FamilySearch Center.

The couple is well known to many in Pahrump through their affiliation with the High Desert Chorale. Andy is the director, and Linna is a singer.

The couple volunteers and helps visitors in their family search at the center, while continuing their own ancestral research.

Linna Barnum remembers exploring family history research by looking at microfilm and microfiche with her father while growing up in Utah.

“You can get all of that information by using these wonderful computers,” Linna Barnum said. “We need them, we need them; we can’t do much of the research without them.”

With the last name of Barnum, one has to wonder if there is a connection to circus great P.T. Barnum. When he was teaching music in the elementary schools in Pahrump, he questioned an actor impersonating P.T. Barnum in a drama group performing in the schools. Barnum learned that he could not be a direct relative to P.T. Barnum, who had no sons.

“Well, the thing that I’ve really been interested in is just getting to know my family,” Andy Barnum said.

Barnum’s research did reveal he had a family member, some generations back, who baptized the man who eventually became president of the Mormon church.

The Barnums do not mind the detailed research, which can be frustrating.

“Just because of the things we find, and if I didn’t enjoy it I sure wouldn’t come,” Linna Barnum said.

Paul Nauta is the public relations manager for FamilySearch International, which oversees the Family History Library in Salt Lake City, the FamilySearch.org website and its network of family history search centers worldwide with 4,960 in over 130 countries, including the one in Pahrump.

FamilySearch International is a charitable operation funded by the Mormon church.

Nauta further explained the church doctrine rooted in family heritage, and the belief that all family relationships continue beyond death.

“We believe, as such, we have an obligation to know the shoulders that we stand on, and to live better lives as a result,” Nauta said. “Research has also shown that children, nowadays, that know more about their family’s history tend to be more resilient against life’s trials. Their self-identity is stronger than those who do not.”

For over 100 years, the church has been working on preserving all the world’s historical records of genealogical value.

“We know that interest in family relationships is not particular to the Mormon church,” Nauta said. “Anybody of pretty much any ethnicity and any faith has an interest in the shoulders they stand on and, therefore, the records and services that we offer are offered freely through the nonprofit organization FamilySearch for anyone to do.”

In 1938, the process of preserving family records on microfilm and microfiche began since that was the best long-term preservation medium at the time.

“During that period, we acquired 2.4 million rolls of microfilm from over 180 countries,” Nauta said. “We’ve made those available to our family history centers.”

The church built the Granite Mountain Records Vault in 1965 outside of Salt Lake City. The mountain repository has maintained the proper temperature, humidity and protection for permanent storage of valuable family history records from all over the world.

About ten years ago, the process of microfilming records was phased out for preserving genealogical records.

“We now are a premiere leader in digital record preservation. So, we digitally preserve the historic records worldwide through our efforts and are making those available on FamilySearch.org for free,” Nauta said.

FamilySearch International has 330-plus camera teams in over 45 countries working to digitize the historical records to make them more accessible for individuals. There are also teams working on-site at the Granite Mountain Records Vault digitizing the records from microfilm.

Nauta said microfilm is not a great accessible medium, which has to be distributed through the family history center network compared to a digital version.

“We can publish it online very, very quickly, and using technology that we’ve developed, we can give you access to the digital image of the original, which, in most cases, is much better actually, and much more clear ,” he said. “So, you don’t have to travel to Germany, or France or South America to look for records of your ancestors that our teams have already filmed and put them right online for free, for you.”

Indexing is a ongoing program throughout the church where volunteers are taking the digitized records, putting them on a computer screen and then logging the information so it can be indexed.

Judith Luellen said there are about 30 or so of these indexers right here in Pahrump.

According to FamilySearch.org, 2016 marked the 10-year anniversary of the online indexing initiative. Thanks to the efforts of employees and dedicated volunteers worldwide, more than 5.57 billion searchable names are available online from over 1.2 billion published historical documents.

Free online classes and webinars are offered every month. Check the site for more information.

The center will be offering a new session of free classes on Wednesdays beginning at 10 a.m. The center is located in the Church of Jesus Christ of Latter-day Saints building, 921 Wilson Road at the corner of East Wilson and West streets.