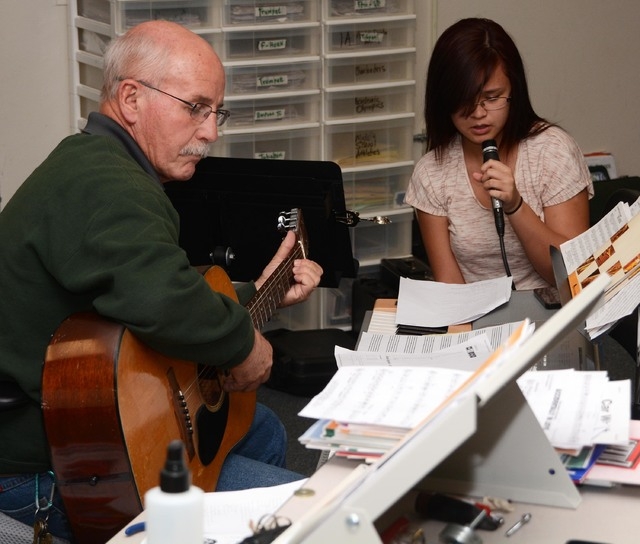 Music teacher Dale Lerbakken conducted his final school concert last night, May 7, and the question on many people’s mind now, or maybe the last day of the school year, is will it be remembered as the day the music died in Beatty?

The allocation of teacher positions to schools is driven by numbers and economics.

Nye County School Superintendent Dale Norton said Beatty’s student enrollment has been on the decline. Currently there are fewer than 100 students from early childhood through eighth grade and 101 in the high school.

With enrollment down and two teachers retiring — the other is long-time Beatty teacher Vern Nelson, who is currently teaching grades 2 and 3 — it is possible that the numbers may not allow for the hiring of two replacements.

The matter is further complicated by the difficulty of recruiting teachers for the rural schools. If Beatty is able to post the position as available, they may not be able to find someone to fill it.

“Their chances of finding someone as good … as committed, is slim to none,” said Norton, noting that Tonopah was unable to fill the music teacher position when their’s retired.

It was Marian Koerner, mother of Assistant Superintendent Kim Friel, who laid the groundwork for Beatty’s very successful music program. She started the program in Beatty Elementary upon which Lerbakken built when he came to Beatty in 1991.

At that time Beatty was riding the wave of population expansion from the now-closed Barrick Bullfrog Mine. It was the first year of classes in the new high school building.

About ten years ago Lerbakken was able to secure a $45,000 grant from the Hughes Corporation to buy instruments and uniforms.

“It’s been a journey of a lot of growth,” Lerbakken said. “I’ve watched the program start out — struggle a lot in the early years because we didn’t have equipment and so forth, and then once we were able to get instruments and uniforms it just blossomed.”

Currently 60 percent of the high school students are in the music program, most of them in band.

“We’ve done many wonderful trips to southern California and to the Laughlin Music Festival for competitions, and done parades in Beatty, Bishop, Amargosa Valley, and Las Vegas,” he said. “We always did well in competitions, with excellent or superior ratings.

“Since I announced my retirement, the kids have been great, upset at first.”

Student Brandon Cross has been involved in the music program since 4th grade.

“It has pushed me to achieve higher goals in the music industry,” the senior said. “I’ve always seen music as a kind of release, a getaway. I’ve learned to have fun while learning.”

Of Lerbakken, Cross said, “He’s gone above and beyond what he had to for this school, and I think the district owes it to our school to replace him with someone just as good.”

Principal Gary Flood says that when he gets the word of how many positions he will be able to fill he will “probably sit on it for a few days and think.”

“Then I will take it to staff. We do things as a team. I value the input of the professional educators I work with. We will see if they have some brilliant ideas.”

It does not look as though it will be easy.

Junior Mae Lupac has been in the program since 5th grade, both band and choir.

“Music changed my life,” Lupac said. “When Mr. L came in teaching choir he gave me a new perspective. He’s the one who helped me with my emotional problems. He told me if I was ever angry or depressed to turn on some music and dance, and he influenced me the best ways possible.

“He taught me how to love life through music. He impacted me, along with so many others. Him leaving this year breaks everyone’s heart. I cried when I found out. I consider him another father figure because he is always there.”

Lupac said that the study of music also helped her with math and reading.

“It bums me out. It’s part of my life. If music is gone, school is going to be boring. I look forward to that class every day.”