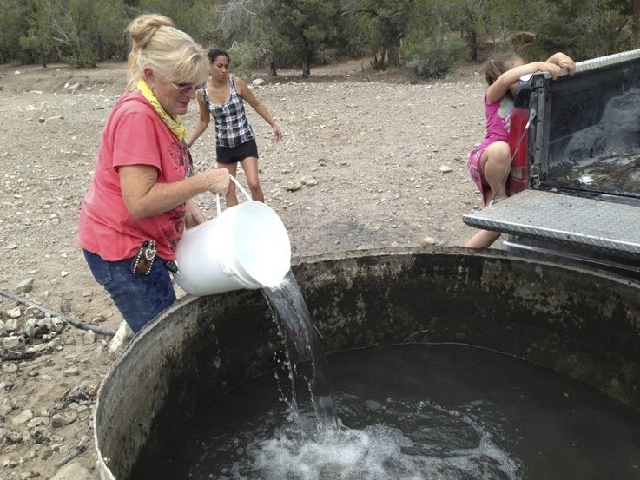 Efforts to fight the wildfire which raged for days in the mountains east of Pahrump have created a problem for the wildlife, including at least two herds of wild mustangs.

The Wheeler Wash well, built by the Bowman family in the 1960s is the main water source for animals which live and forage in the high mountains.

Using whatever resources were available to fight the fire left the well and the springs which feed it dry.

The well is off-the-beaten-path and no one noticed it had run dry until a local woman and her son planned a birthday weekend at the rustic campground adjacent to the kilns.

Lynn Adams and her son Jason Weaver gathered the camping equipment and the family and headed to the campground July 24. After making camp, Adams and Weaver went to the well in hopes of spotting the horses and deer which come to drink from the isolated trough.

Adams said, “We were watching a mare and her foal from a distance and realized they weren’t getting anything to drink.”

She said she and Weaver went to inspect the situation only to discover the rocks lining the bottom of the holding tank were dry. “Jason climbed into the well and started moving rocks to see if there was any water under them. There was nothing but black mud and ash from the fire.”

She said as Jason was moving stones the wild horses were trying to get at the mud he uncovered.

“There was a stallion and a bachelor stallion there, too,” Adams said. The stallion kept chasing the younger male away. All he wanted was a drink. He was so dehydrated he was shaking.”

Deciding they had to do something, Adams made a call to a friend and put refilling the water container in motion.

“It was amazing how people wanted to help.”

Linda Hatley, in Pahrump, rallied trucks and water containers including food-grade, five-gallon pickle buckets, barrels used in barrel racing and an unnamed person with access to a small tanker truck.

Adams said she and Jason cleaned out the well and began putting rocks in the bottom to help raise the water level quickly. The well holds about 1,000 gallons.

“When the first water was dumped into the trough, Jason was in it. The bachelor stallion didn’t care. He was drinking as fast as we could pour with Jason right there. All they wanted was water. I feel sure if we hadn’t found it, those horses would have died.”

She said a buck in full velvet, a doe and a yearling waited just long enough for the horses to move before they, too were muzzle down in the fresh water.

Adams and Hatley both said a number of people have volunteered trucks and trips to the well on a daily basis.

Adams said, “We’re fortunate the tanker could make it up there. The driver was a godsend. He topped off the trough.

Adams said after the group’s emergency measures she called the BLM office to find out what could be done.

“They are sending someone to assess the problem but meanwhile we have permission to keep taking water up there.”

She said the BLM was very adamant that it was water only. “No food, no carrots for goodies, no hay … nothing but water,” Hatley said.

The group would like other volunteers to step forward and help water the wildlife until rains or snow replenish the system of springs which feed Wheeler Well.

“I feel sure it was God pointing the way on this one,” Adams said. “We were meant to find the well and help. Even the animals knew we were there to help. There was no fear.”