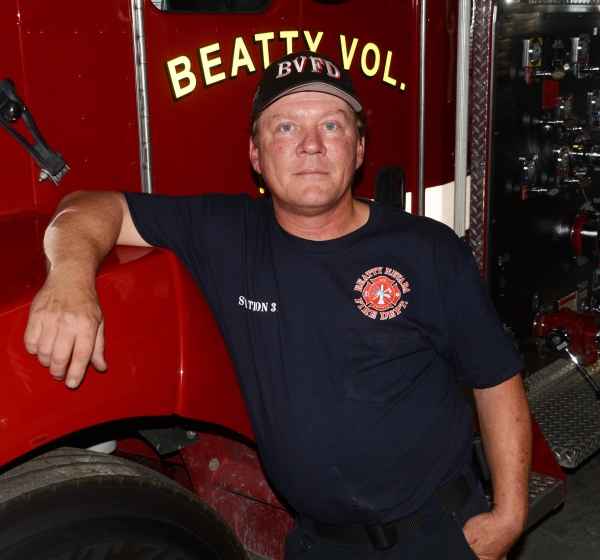 BEATTY – Back in May, Beatty resident Mike Harmon became an honoree of the Points of Light Foundation for his efforts to help his community.

The Points of Light Foundation was established by President H. W. Bush, who said, “Points of Light are the soul of America. They are ordinary people who reach beyond themselves to touch the lives of those in need, bringing hope and opportunity, care and friendship. By giving so generously of themselves, these remarkable individuals show us not only what is best in our heritage but what all of us are called to become.”

Harmon does a lot of volunteer work beyond his full-time job of maintaining the town’s emergency services equipment and facilities. He has lent a helping hand to many residents. “We don’t have a lot of fires here,” he says, “so I’m happy to be able to help people whenever they need it.”

Harmon serves as chief of the Beatty Volunteer Fire Department, and he has trained to become not only a firefighter, but a fire-fighting instructor, an emergency medical technician, and a hazmat technician. His training in pyrotechnics comes into play in the town’s Fourth of July fireworks display.

He fights fires, responds to accident scenes and works to extract victims from the wreckage, and also goes on many ambulance runs.

Sometimes, when other EMT’s respond to a scene, he will follow in his own vehicle in case they need help.

Harmon has also been known to aid non-human victims. He and fellow fireman Kaline Willis once rescued two young rabbits that had fallen into a cistern in the desert near Beatty. After the rescue, Harmon saw to the construction of a barrier to keep more animals, or people, from falling into the dangerous hole.

His Daily Point of Light story can be found online at http://www.pointsoflight.org/programs/recognition/dpol/awards/5469.

Scroll down to May 1. He is currently on page 8.