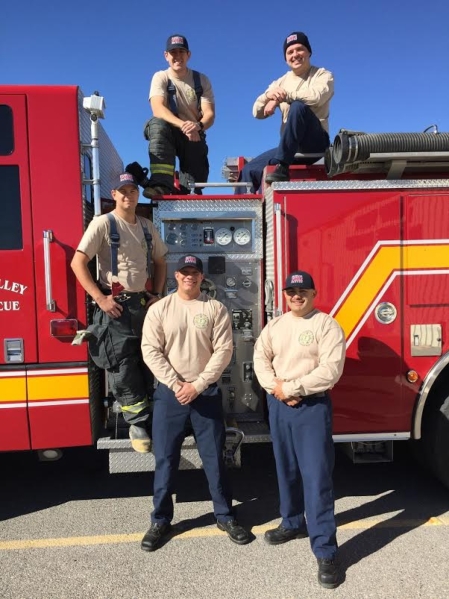 Crew members from Pahrump Valley Fire and Rescue Services thought of a creative way to show their support for area veterans today.

However, a copyright held by the Department of Defense won’t allow for the shirts to be used as a fundraiser as originally planned.

The squad conceived and designed commemorative Veterans Day T-shirts as a way to raise funds for Pahrump’s Veterans of Foreign Wars Post 10054 on Homestead Road.

The idea, according to the International Association of Fire Fighters Local Union President Justin Snow, was to sell the shirts where 100 percent of the proceeds would go to the VFW.

“Originally, our plan was to do what we did with October’s Breast Cancer Awareness T-shirts that we created,” he said. “Proceeds from the sale of the veterans’ shirts was going to go to the VFW as well, but it was pointed out to us at the last second that the official seal of the military branches at the bottom of the shirt are copyrighted by the Department of Defense so we won’t be allowed to do that.”

“I guess the government doesn’t look kindly on you selling things that are copyrighted even if you are going to donate 100 percent of the money to a deserving charity or organization,” he said. “Hopefully we’ll get that sorted out by next year and we plan on making this an annual thing that we do just like the breast cancer shirts.”

The shirts will be worn by fire crews throughout the month of November.

Snow made sure to point out that the design was voted on by the union’s membership.

He noted the shirts are all American made.

“They were put together by our public outreach committee, which they originally wanted to do it on camouflage designs,” he said. “Anything we do will be American made and by union shops and we found that the Army tan color T-shirts are much better quality shirts and they’re also American made, so we are using those instead and I think it looks great.”

Though they will not sell the shirts to benefit the VFW, Snow said many of the firefighters routinely donate to the organization.

“We did the same thing with the pink breast cancer awareness T-shirts and the proceeds went to the Susan G. Komen Foundation,” he said. “Many of our guys have already donated money to the VFW and we were just hoping to sell the T-shirts and donate 100 percent of the proceeds, on top of our own donations to add a little extra.”

Additionally, Snow noted that numerous veterans have also served on the fire department.

“We have one right now who is in the National Guard and our past president of the IAFF Union is a Coast Guard veteran,” he said. “We’ve had more than a few veterans work for us over the years and we are very appreciative to them for their service as well as everybody else.”

“This is the first time we’ve ever undertaken something like this for our local veterans and we try to look at everything that we feel is worthy of support within the community,” he said. “Hopefully we will get permission next year from the Department of Defense because no one is making a personal gain off of this and it was way too short of a time frame to deal with anything regarding the federal government.”