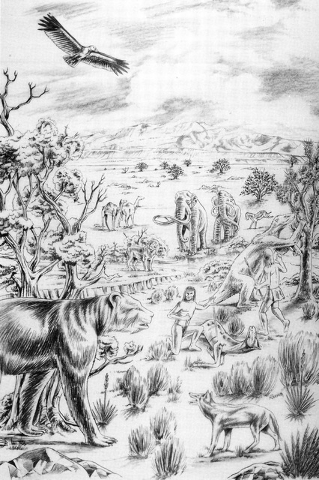 The Pahrump Valley and a few of the plants and animals living in the area about 11,000 years ago. Hunters—Clovis people, the first known human occupants of the area—have just killed a horse with their spears while a burro can be seen in the distance. This drawing by Gary Raham, Wellington, Colorado, with consulting by W. Geoffrey Spaulding, appears in "Las Vegas: The Great American Playground," Robert D. McCracken.

Editors Note: This is the first of a four-part series on the first inhabitants of the Pahrump Valley that will run during the next four weeks.

Nobody knows exactly when human beings first set foot in the Americas.

For years the earliest evidence researchers could find proving human presence in the New World pointed to a time about 13,000 years ago.

That evidence was attributed to the Clovis people, who produced characteristic stone spear points found at many sites in the United States, Mexico, and South America. The Clovis people were big game hunters, and brought down now-extinct huge mammoths with only their spears.

The Clovis were assumed to have been the first people to enter the New World, crossing over from Asia to what is now Alaska on a land bridge that had formed when the ocean was lower during the last Ice Age.

From there, in what has to be one of the great dramas of human history, they spread out over and occupied much of the New World. Recent genetic evidence suggests that the Clovis people are direct ancestors of about 80 percent of the current native populations of North and South America, likely including the Southern Paiute of Pahrump Valley.

But theres a caveat to this story. Recent research clearly shows that the Clovis people werent the first ones on the scene. Evidence from several recently excavated archaeological sites proves human beings were here at least a couple of thousand years before them.

For example, recent excavations at an old sinkhole in Florida located a few miles inland from the Gulf of Mexico have yielded several stone tools and mastodon bones, including a mastodon tusk with grooves on it made by stone tools, indicating butchering. Remains of a butchered mastodon carcass found there date to 14,500 years ago. Remains of a domesticated dog were also found at the site.

Likewise, in the Texas Hill Country, archaeologists have found 56 stone tools lying four feet beneath an undisturbed surface along with 15,000 stone flakes and chips, proving human workmanship. These findings date to 15,000 years ago.

A key point in this discovery is that they lay beneath a layer of tools belonging to the Clovis people.

As might be expected, the Clovis people were present in what is now Nevada and in Nye County. When these pioneering people entered the region they would have found an abundance of game, including mammoths, camels, horses, deer, huge sloths, and the enormous and not-to-be-trifled-with short-faced bear, not to mention numerous small species such as rabbits and birds. Large shallow lakes were found in most valleys and game was drawn to the fresh water and the abundant plant life nearby.

In lower Smoky Valley in Nye County, Clovis people lived at the edge of a fertile marsh located in the delta where Peavine Creek joined old Lake Tonopah. They could have sustained themselves on the areas resources without having to travel far.

It has been suggested they might have remained there for several hundred years until a warming and drying trend caused the region to become less abundant. The Clovis peoples way of life, based on hunting big game, disappeared.

The era of the big game hunters was followed by what is called the Lake Mojave Period. It may have begun with use of marsh and grasslands environments and a shift to a more nomadic way of life. It lasted until about 2,500 years ago.

What is known as the Desert Culture followed. During this period, occupants were nomadic hunters and gatherers, moving from valley floor to mountain top, exploiting resources with the changing seasons.

Many researchers believe that the people who occupied the Pahrump and Las Vegas valleys during this period were the direct ancestors of the Southern Paiute, who were first contacted by Europeans in the late eighteenth century.

The next era in Pahrump Valley archaeology began about 2,000 years ago when the Anasazi, ancestors of the modern Pueblo Indians, including the Hopi in Arizona and Pueblo people in northern New Mexico, moved into what became southern Nevada. They appear to have been very interested in trade. This population moved out about 800 years ago, perhaps because of a major drought and over-exploitation of the environment.

The last phase of Southern Paiute history began in the late 1700s, when first the Spanish, followed by white Euro-Americans, made contact and, over time, became an ever-increasingly important part of the Southern Paiute world.