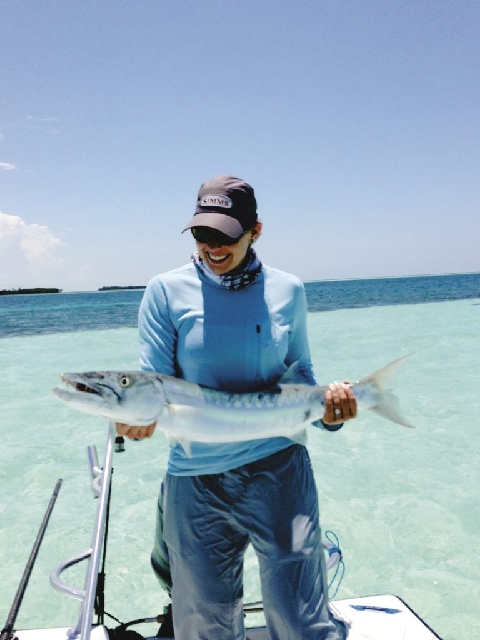 This is the continuing story of young Ben Arata, a dedicated sportsman. But his passion for adventure runs in the family. His sister Amanda doesn’t plan on being outdone by her younger brother.

They have just returned from a 10-day, coast to coast, fishing adventure starting in Key West, Fla., where they fished for Tarpon. They ended their trip fishing for King Salmon in Oregon.

It began with a call to their long-time guide friend, Captain Ryan Erickson of Key West Tarpon Guides. They hoped to time their arrival with the start of “the worm hatch,” which refers to the Palolo worms, a reef invertebrate found in only a few world locations; Key West is one of those. The Palolo exhibits a unique breeding behavior. During the full moon, with a changing outgoing tide, the invertebrate detaches its tail section, which rises to the surface and “swims.” They do this in swarms of thousands. The Tarpon find them irresistible and feed with reckless abandon.

The Arata group timed their trip to match this June cycle and they were not disappointed.

Amanda quickly hooked into the first Tarpon and it took off and danced on the water as only Tarpon do, but Amanda was ready with an experienced rod and played it well. The fish made repeated runs, but eventually succumbed to the constant pressure of the tight line and was able to be released at boat-side following a picture and careful measurement, 165 pounds, first fish of the trip. It was followed the second night with a 110-pound Tarpon. They were all soon tied into Tarpon and sharks.

Erin hooked into a nice 75-pounder, her first, but seemed to be the shark-catching expert after hooking several Nurse Sharks and Spinner Sharks.

And then there were the Barracuda — one of my favorite sport fish. Amanda hooked one that devoured her bait, but was itself nearly devoured as it ran from the sharks reacting to the action; it was nearly chased into the boat. She was able to keep it from the sharks and bring it aboard intact. This is exciting fast-action fishing at its best.

Ben, young gentleman that he is, caught his share, but reminds us that fishing, or hunting is not always about taking the biggest or most, but rather being in wild places and sharing the adventure.

Three days of fishing and it was back to Nevada and on to Oregon where Erin demonstrated her fresh-water salmon fishing skills honed to a fine edge in New Brunswick, Canada, where she was raised.

They fished with Ben’s friend, Joe Halburt, who manages a fish hatchery for Oregon Fish and Wildlife.

They drift boat fished the Nestucca River, bouncing shrimp and salmon eggs. The Salmon were not in, but the Steelhead were and it was a good day with these most prestigious trout that never fail to put on a good show of rushing and displaying their acrobatic skills.

The next day it was the ocean and trolling cut plug herring. They towed bait for over four hours with no activity. Next pass, hook up, and the salmon put on a good show the rest of the day with all the excitement these fish can bring. Erin then was able to demonstrate her fishing skills with multiple hookups. The day ended back at camp with Joe sharing one of his famous seafood dinners, fitting ending for a coast to coast fishing expedition.

Bottom line: There are those who enjoy nature and adventure watching television, and others who have the true spirit of adventure. The Aratas live the adventure and pass on the tradition by sharing it.

If you have a story or a comment, please e-mail me at quest-dans@usa.net or visit us at www.sportsmansquest.org

The world’s largest fishing trade show, ICAST, is being held July 9-12, 2013 at the Las Vegas Convention Center. There is a New Product Showcase where you can preview next season’s fishing gear and accessories at www.icastfishing.org.