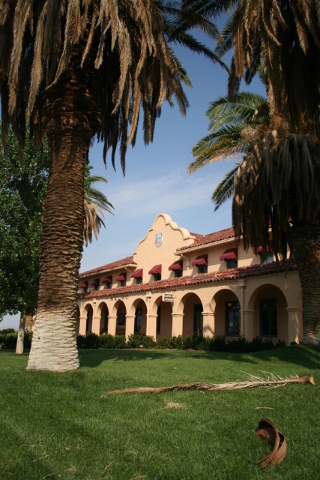 After driving dozens of miles of remote desert road through the 1.6 million-acre Mojave National Preserve, California, people are often quite surprised when they come upon the Kelso Depot.

Here is a railroad station large and elaborate enough to serve a small city, sitting virtually in the middle of nowhere, at a tiny desert crossroad. It’s not only one of the grandest buildings in the east Mojave but it also serves as the primary visitor center for the preserve, has excellent museum displays and even a small bookstore.

This Spanish Colonial Mission Revival-style building was constructed by the Union Pacific Railroad in 1924. It was originally a workplace for general railway services; it also housed employees and offered dining for passengers and workers. It became a gathering place for the local population, which reached some 2,000 during World War II, many working as iron ore miners.

The area is all but a ghost town now. Once the railroad changed from steam locomotives to diesel, they didn’t need to stop here for water and the addition of dining cars to passenger trains ended most of the need to serve meals. While the restaurant and boarding rooms remained in use, the depot’s busy years ended in 1962 and the Union Pacific closed it in 1985. It was even scheduled for demolition but thankfully preservationists learned of that plan and managed to halt it while seeking a better fate for the building that embodied so much East Mojave history.

The Bureau of Land Management purchased the depot in 1992 when the park was the East Mojave National Scenic Area. Two years later the park service took it over as part of the Mojave National Preserve. Renovation began in 2002 and the depot was reopened to the public in the fall of 2005.

Quite a lot of historic research was put into the refurbishing. For example, restorers scraped down the paint to the original base coat, both inside the building and out, so they could match the colors. They found old photographs that showed the building in its original state, and thus discovered it had sported awnings. Based on this information, the outside of the building got a fresh coat of peach-colored paint and new burgundy awnings.

There are fine displays on mining, ranching, human history, wildlife and geology here. One of the best places to learn about the railroad history and the Union Pacific Railroad is on the second floor. Here you will find two completely restored employee rooms that are set up as they might have been more than half a century ago. They come complete with the roar of actual trains, which don’t stop here anymore but pass just a few yards away about once an hour. For the best train-watching thrill, just step outside the depot’s front door and walk up to the safety fence.

Since the depot serves as the park’s primary visitor center, this is the place to pick up maps and hiking information, ask a park ranger any questions you might have, or maybe enlist your children in their Junior Ranger Program. There is also a very well done 12-minute orientation film. Bring your own food and drinks and fill your tank with gas before driving into the park. The depot is open daily Thursdays though Mondays from 10:00 a.m.-5:00 p.m., closed Tuesdays and Wednesdays. (760) 252-6100. www.nps.gov/moja/.